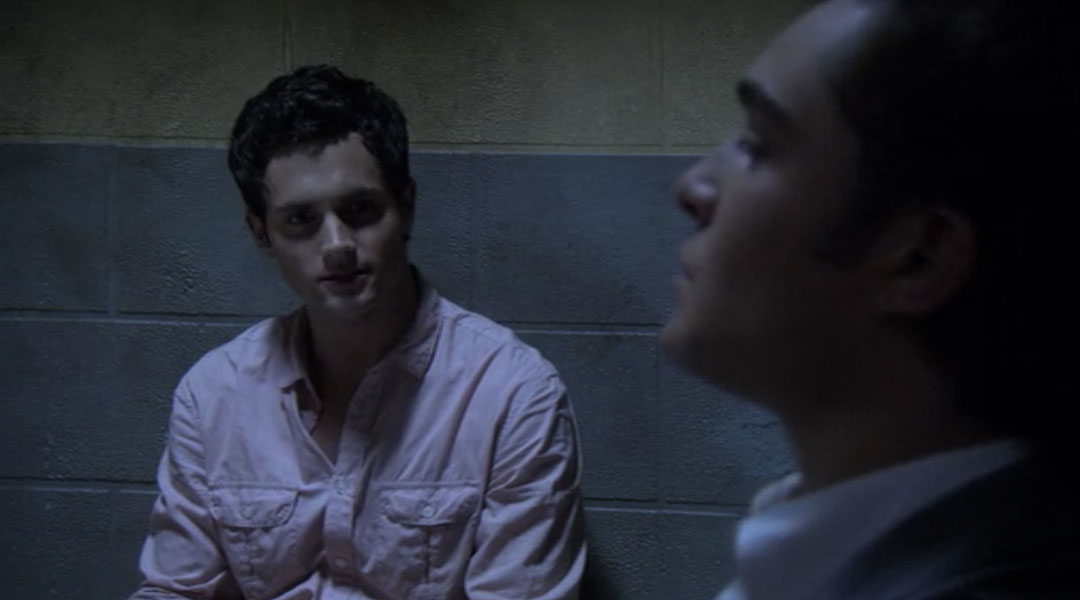 Gossip Girl: When the white tents blossom in Bryant Park it can only mean one thing: Fashion Week. The time of year when any Park Ave Princess would trade her last Prada [] for front row seats to the best shows. And we hear the seating chart for Eleanor Waldorf’s show is being made by our very own B.

Dan: Augh. School. Another day of reading, writing and aristocrats.
Jenny: Are you back to Invisible Boy?
Dan: Invisible suits me.

Lily: There’s a Mappelthorpe that’s coming up for auction, uh—
Serena: Wait, Mappelthorpe. Isn’t that the one who took all the pictures of the naked guys?
Lily: Yeah. Um. Not just guys.

Chuck: Watching you fail spectacularly gives me so much joy.
Blair: And you know what you give to everyone Chuck? Misery. There’s a reason you’re always out here alone.
Chuck: Nate just happens to be away at his grandparents.
Blair: Nate’s only friends with you out of habit. The only person with fewer friends than you is Dan Humphrey. And at least his lame 90s dad likes him. And that’s because he’s something you’ll never be: a human being.

Noah Shapiro (David Patrick Kelly): You sent me five stories. All about a sheltered young man with girl trouble who lives with his daddy in Brooklyn. You think that’s going to knock the Yale English department off their tenured asses?
Dan: I just, I thought a writer was supposed to write what he knows. This is what I know.
Noah Shapiro: Then learn something new. Get out of your comfort zone. A cardinal rule of writing: if your work’s too safe then do something dangerous.
Dan: I wouldn’t know where to begin.
Noah Shapiro: Then find someone who does know. When I was young Bukowski put a shot glass on my head, blew it off with a pistol. Find your Bukowski. Then get back to me.

Dan: I know we don’t like each other and you think of me as a boring, sheltered nobody.
Chuck: I don’t think of you.
Dan: Right. Of course you don’t. But I’ve been thinking of me. And I have come to the conclusion that I need to get out of my comfort zone. I need to experience new things.
Chuck: Are you gay?
Dan: Now that would be out of my comfort zone, but no. I just need to get out of Brooklyn. For one night. I’d like to experience the world of Chuck Bass.
Chuck: You’re lucky I’m bored.
Dan: Is that a yes?
Chuck: Get in before I change my mind.

Gossip Girl: What would Fashion Week be without a fashion victim? Looks like Little J. just started her own trend: wearing a bullseye on her back.

Chuck: You’re either in for the full ride or you’re out. What’s it going to be?
Dan: Alright, pass me the shots.
Chuck: The liquor’s just a chaser. {hands him a pill}
Dan: What is that?
Chuck: Does it matter? Go down the rabbit hole. Or go out the door.

Rufus: Blair. What could we have done to deserve a visit from you?

Dan: Who knew there was a sex club behind the White Castle? And “beer before liquor.” How do you know so many twins?
Chuck: Twins find me.

Chuck: Tonight was nothing. You’re just a drunken idiot.
Dan: Can I at least have my shoes?

Gossip Girl: They say in fashion you can become a success overnight. But one minute you’re in, and the next you’re out.

Dan: When did you start drinking in bars alone?
Chuck: When I realized hot, desperate girls drink in bars alone.
Dan: What’s your father like?
Chuck: Me. Only older. And meaner.

Dan: Jail. Brawling in public. You know I hear Yale’s looking to create more bar fighters this year. Bar fighters and, um, Pacific Islanders. They’re looking to round out the freshman class.

Dan: Has he always been like that?
Chuck: Since the day I was born.
Dan: Ah, that’s crazy. Even Bart Bass doesn’t hate babies. It’s, uh, it’s in our DNA. I think Disney did a study.
Chuck: He hated me.
Dan: That doesn’t make sense.
Chuck: It does if his beloved wife died giving birth to me.
Dan: That’s not your fault.
Chuck: Tell him that. Sometimes I swear he thinks I killed her. Who knows, maybe I did.

Jenny: I waved the white flag at school. Why can’t you just claim your throne and leave me alone?
Blair: Because I can’t!
Jenny: This is about Serena. I didn’t realize.
Blair: And why would you?
Jenny: You might be privileged, Blair, but you work for every single thing you’ve achieved. Like me. Serena just glides through.
Blair: Tell me about it.
Jenny: I wanted to be your friend last year for a reason. I wanted you to like me.

Blair: You blew off our most beloved tradition.
Serena: Just get over it, Blair.
Blair: Excuse me?
Serena: My whole life I have been bending over backwards to protect your feelings. And you know what? It’s not my fault you’re so insecure.
Blair: And I’m sure it’s not your fault you’re so conceited.
Serena: I’m just tired of trying to hold myself back so I don’t outshine you.
Blair: Oh my god. Can you hear the words that are coming out of your mouth?
Serena: It’s just the truth. From now on, I’m going to be who I am. And if you can support that and not be threatened and competitive, then great. If not…

Gossip Girl: If there’s one thing I’ve learned, it’s that there would be no gossip without secrets. You might be brave enough to reveal your secret only to have it used against you. Or someone else’s secret might effect you in unexpected ways. There are some secrets you’re only too happy to keep. Others surface only to be buried away deeper than they were before. But the most powerful secrets are the truths you thought you could never reveal. That once spoken change everything. But don’t worry, B. The brightest stars burn out the fastest. Or at least that’s what I heard. Waiting for a star to fall. XOXO —Gossip Girl