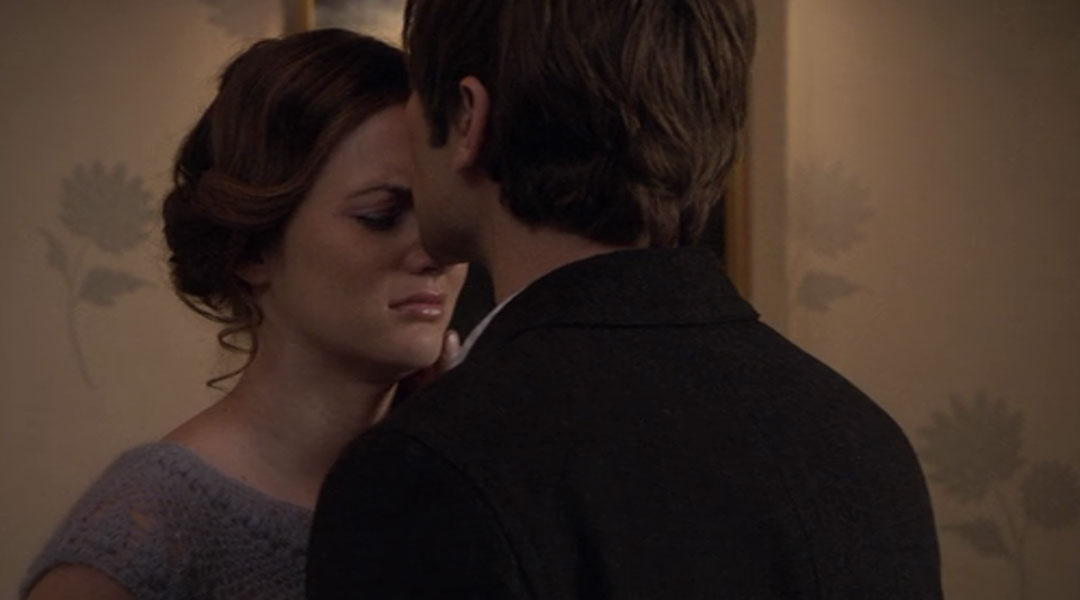 Gossip Girl: Mornings are simply more fun on the Upper East Side. Our favorite things to wake up to? The sun in the sky, the Nikkei on the rise, and a wake-up call from your lover. Or your best friend.

Rufus: Lily’s doing breakfast today. She wants to talk to us.
Dan: Ominous.
Jenny: Or delicious.

Poppy (Tamara Feldman): So what about you? What’s new? Seeing anybody?
Serena: Oh yeah. Dan and I got back together. But then we broke up again.
Poppy: Oh, I’m sorry. And your friend, what’s her name, Blair?
Serena: Yeah.
Poppy: How’s she doing?
Serena: Good. Now. There was this thing between us but then we worked it out so…
Poppy: Sounds like everything’s exactly the same as it was last time I saw you. Makes catching up easier though, right?

Poppy: Have fun at your little party. And take care of yourself, okay?

Dan: What does Chuck Bass do at 8am? It’s not like you work out.
Chuck: I do my cardio in the evenings. Morning is for business. For which I’m late. So if you’ll excuse me.
Eric: Does this feel like a sitcom to anybody else?
Dan: Feels like a reality show.
Chuck: Good. So I can vote you off.

Lily: We wanted to tell you in person—all of you.
Serena: We are planning a Sweet Sixteen party for you here. Tomorrow night.
Lily: Fantastic caterers and beautiful flowers.
Serena: DJ, the perfect guest list. We wanted it to be a surprise though.
Lily: We heard you had one of those last year and it didn’t go so well.
Eric: Oh… Jenny Cake.
Rufus: Well that’s why this year I was more than happy to delegate to people I know better.

Jenny: Last year I would have killed for a party like this. But this year I don’t know. Things just seem… just seem different. I was just kind of hoping that it would be us and Vanessa and Jonathan and then, I don’t even— maybe those two girls from my Chem class who didn’t light my hair on fire that one time. I’m sorry. Is that okay?
Serena: Yeah. Maybe we should just try the cake first.
Lily: It’s your birthday. It’s whatever you want.
Serena: Yeah. Yeah, you know. It’s not a problem. I’ll just cancel.
Rufus: I’m thinkin’ my famous chili.
Dan: Maybe some board games.
Jenny: Yeah. Um but really. Thank you so much for thinking of me. It means a lot.

Gossip Girl: Spotted: S learning the answer to the age-old question. What if you were throwing a party and no one cared? When that happens, don’t cancel—
Serena: Poppy. Hey it’s Serena. You know that party I was telling you about. I was hoping we could meet up. I need your help.
—Make them eat cake.

Chuck: I see you got the email I sent from Nate’s account. His password has been “soccer” since the fifth grade. Look, Blair leaves his place at this time every morning. When you’re ready to do something about it you know where I am.

Gossip Girl: And when you’re not from the Upper East Side, sometimes morning is just the start to a very bad day.

Blair: Nate and I have— had—plenty of spark. Better than that. Fireworks.
Chuck: That was us.
Blair: Chuck. Don’t act like I didn’t fight for you. I did. Hard. For a long time. So please, forgive me if now that we’re over I’m exhausted.
Chuck: So why are you with Nate? Because it’s easy?
Blair: I’m not “with” Nate. But if I was, what’s wrong with easy? Maybe it’s easy because it’s right.
Chuck: Oh really. Is that why Nate is so reluctant to break things off with Vanessa. You do know they’re still dating, right?

Blair: You know what I was just thinking? Jennifer Aniston is totally fine now. I’m sure Brad doesn’t even feel bad anymore.
Nate: Okay.
Blair: I mean I’m sure that there was some collateral damage, which is always sad, but his fate lay with Angelina and he knew that. So he had the tough conversation and moved on.
Nate: This is your way of saying I should break up with Vanessa? So you and I can—
Blair: Embrace our fate.
Nate: Ah.
Blair: Yes.
Nate: Okay, well I wasn’t actually going to tell you this until afterwards but Vanessa called a couple of hours ago and she just wants to talk so I asked her to meet me for dinner.
Blair: But can’t you just text?
Nate: No.
Blair: But what if when you see her there’s sparks? Or fireworks even. You know they say break-up sex is—
Nate: Hey hey hey, it feels over. And I’m sure she’s going to tell me the same thing.

Blair: It’s 10:30, Dorota. What took him so long?
Dorota: Maybe girl from Brooklyn cry. Mr. Nate nice boy. He wipe tears, he touch her hair, she touch his—
Blair: Dorota!
Dorota: Not that this ever happen to me.

Blair: Pour that Dom down the drain, Dorota. Wait. Is that the 96?
Dorota: What happen Miss Blair?
Blair: He kissed me. On the forehead. Like Chevalier kissed Gigi. Like he was a man and I was a little girl. No passion, no spark. Maybe Chuck is right. Maybe all Nate and I have together is just history.

Gossip Girl: Poor B. It’s hard to turn up the heat with an old flame. But stand back. Someone’s about to add fuel to this fire.

Serena: Wait, back up Blair. Nate and Vanessa broke up?
Blair: Well they had a falling out after the van der Bilt party. Hadn’t spoken for a week and broke up last night.
Serena: How do you know all this? Have you dumped me for Vanessa?

Serena: When are you getting to my party?
Blair: You mean Jenny’s party.

Dan: Guilty : Liberal Victims and Their Assault on America by Ann Coulter.
Vanya (Aaron Schwartz): Dorota gave it to me. She said important to know enemy. It’s okay. I read to make Dorota happy.

Penelope (Amanda Setton): In the past ten minutes I’ve been hit on by two Bronfmans and a gay designer. It was so worth it.
Hazel (Dreama Walker): Kudos on rising up from the social grave.
Nelly (Yin Chang): Speaking of graves, did something die in that pot?
Dan: It’s cumin.

Jenny: Enjoying my party?
Eric: You know I was just saying to Jonathan that this is a lovely intimate family gathering.
Jonathan (Matt Doyle): Nothing says “Jenny Humphrey” like a customized cocktail napkin.

Vanessa (Jessica Szohr): I came to you because I wanted to do something besides feel sorry for myself. But all it’s been is sleazy platitudes and… you staring at my boobs.
Chuck: I came up with several excellent ideas. You shot most of them down.
Vanessa: Yeah, because they all involved leaking a Chuck/Vanessa sex tape to the internet.
Chuck: We don’t have to leak the tape if you don’t want to.
Vanessa: You’re consistent. If twisted.

Gossip Girl: Spotted: two people who should know better. And two people that don’t know what hit them.

Nate: Blair stop acting like me being your friend is some sort of plot to humiliate you. Okay? Did you ever think that maybe things didn’t work out between us because we weren’t friends?
Blair: You’re right, Nate. This week you’ve become my friend. It’s amazing. And I’ve never wanted to kiss my friend so much—
Nate: Hey hey hey. We’re at a party full of people in Chuck’s room. And he and Vanessa are right behind the wall.
Blair: Does it excite you?
Nate: Blair. he brushes her hair away.
Blair: Don’t. Only my boyfriend gets to touch my hair.

Vanessa: They’ve been in there for awhile. What if all we did was push them closer together?
Chuck: You just need to relax. And trust in the power of our overwhelming sexual chemistry to drive a wedge between them.

Nate: You wanted to be more like Blair Waldorf. Well congratulations. You succeeded.

Gossip Girl: Uh oh. Looks like someone’s up to their old tricks. And just in time too. Cuidado, España. Here comes el problema.

Blair: The ducks do soothe me.

Gossip Girl: Mistakes. We all make them. They usually start with the best of intentions. Like keeping a secret to protect someone. Or getting some distance from the person you’ve become. Sometimes we don’t even know what mistakes we’ve made to get us where we are. Or we figure it out just in time to make it right again. But every mistake happens for a reason. To teach you a lesson you would otherwise never learn.

Chuck: You’re going to leave without saying goodbye. I knew you were more like me than you were letting on.
Vanessa: Chuck, it’s morning now. As in cold light of. As in let’s pretend last night didn’t happen. We can just as easily pretend this didn’t happen too. {he kisses her}

Gossip Girl: And hopefully you never make that mistake again. Lucky for me, that never happens. XOXO —Gossip Girl