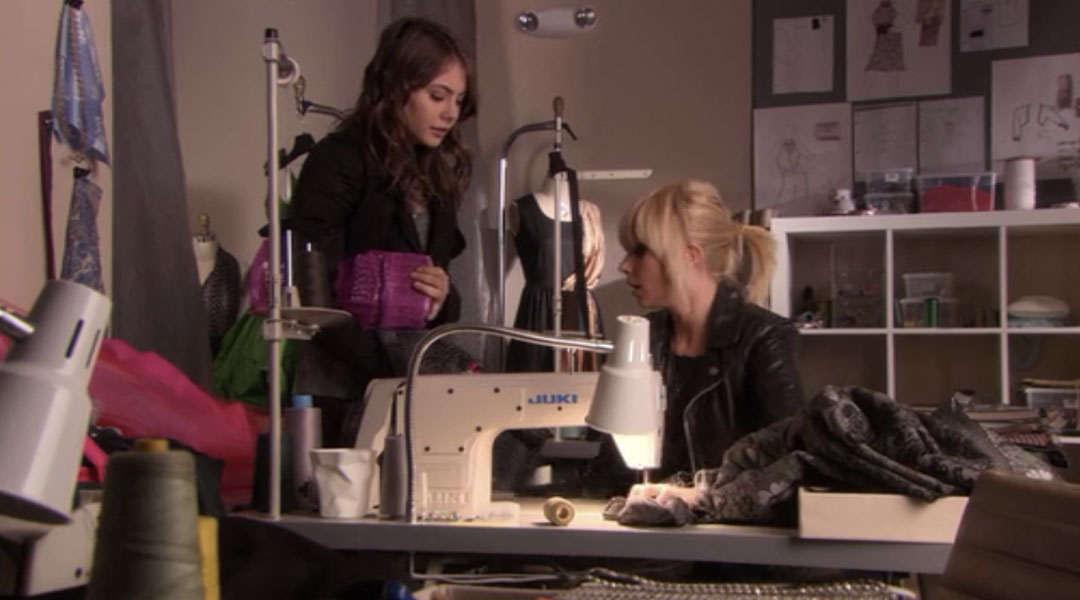 Gossip Girl: Every girl fantasizes about finding her Prince Charming. But if that Prince refuses to come…
Dorota: You are late. Time for breakfast.
Blair: I’ll be down in a minute. I just have to finish something.
…A girl has to take matters into her own hands.
Dorota: Don’t forget: God always watching Miss Blair.

Rufus: Honey, breathe.
Jenny: No! No time for oxygen! I am late.

Chuck: Wanna get in? I’d love to give you a ride.
Blair: Oh I’m sure you would. Too bad you’ve made the terms of that arrangement impossible.
Chuck: About that. Maybe I was a little too hasty. Come on. Get in.
Blair: Maybe I don’t want you anymore.
Chuck: Don’t torture me. I’m dying. As Blair approaches the car, Chuck locks it. All you have to do is say those three magic words.
Blair: I hate you.

Agnes (Willa Holland): I’m Agnes, by the way. I think we’ve worked together because I kind of recognize the top of your head.
Jenny: Jenny. And yeah, ’cause I think I recognize your feet.

Dan: Hey. How’s AP Economics treating you?
Serena: Well today there was a rousing debate about inflation versus liquidity. Which Isabel solved by calling Warren Buffett. Apparently he’s her godfather.
Dan: Hey, um, so the other night, seeing you was really nice. I know the first leg of the “Dan-Serena: Let’s Be Friends” tour was a disaster.
Serena: Well we were young and stupid then. Now we’re older and wiser.

Blair: You know just because you two are making a doomed attempt at being friends doesn’t mean I have to play the enabler.

Blair: I have an itch that only Chuck can scratch and he won’t oblige unless I tell him I love him.
Dan: You need help getting Chuck to sleep with you? Really?
Blair: You hear the judgment in his voice right now, right?
Serena: He’s working on that.

Blair: I was thinking I would just disappear for awhile and give him a taste of life without me.
Dan: No. That’s a terrible idea. Don’t disappear. Become unavoidable. Chuck may be a deviant but he’s still a man. So just, you know, drive him crazy, wear him down. You should be good at that.
Blair: Well look who finally got a little interesting.
Dan: I’m sure it’s a fluke.

Gossip Girl: Spotted: Upper East Side beauty laying down the gauntlet for her favorite beast. But careful Princess, it’s going to take more than a little leg to get this Prince to ravish you.

Blair: So ever since Charlize Theron became the face of Dior I’ve wanted to change my signature scent and I’ve been trying out a new one. would you mind?
Chuck: Smells a little like desperation.
Blair: Yeah well I’ll just keep on looking. Thank you. You’ve been very helpful.

Chuck: I gave you a shot. And while your efforts were admirable, I’m bored. And you’ve ruined my pants. Goodnight, Blair.

Blair: I just wanted to thank you for encouraging me to throw myself at Chuck. I can skip dinner now that I’m so full of humiliation. Chuck was completely unmoved.
Dan: Well are you sure he wasn’t just acting like it didn’t work?
Blair: Unfortunately there was no hard evidence of that. Literally. I didn’t even get the chance to show him my necklace tangled up in my hair. The nape of the neck is Chuck’s kryptonite.
Dan: Oh, that’s good to know. So he just got up abruptly and he left?
Blair: Like a Bass out of Hell.
Dan: Well then you’ve got him right where you want him. Trust me. He’s headed home. Intercept him.
Blair: I’ll let you know what happens.
Dan: Oh… please don’t.

Gossip Girl: Sorry J. But in the real world you can’t take a note to the principal when a drunken model eats your homework.

Serena: Wow. This looks complicated.
Aaron: Don’t worry. You walk into a surgery halfway through it looks like murder.
Serena: Can I help?
Aaron: You know how to weld?
Serena: Um, I’ve seen Flashdance several times.

Eleanor (Margaret Colin): I should have known better than to give so much responsibility to a child.
Jenny: A child? I’m sorry, but this child seems to be the only one who can design anything that the buyers are remotely interested in.

Jenny: Can I at least have my dress back?
Eleanor: Sure. It’s of no use to me anyway. Here. She hands Jenny the newest dress
Jenny: I don’t mean this one.
Eleanor about the runway piece: You touch this dress you will never set foot in here again.

Gossip Girl: Sometimes the most important thing to know is when to get out. And when to give in.

Aaron: If you can tell me the fate of Cecil the Caterpillar I will go out with you.
Serena: Okay, I don’t really date crazy people who speak in riddles.

Blair: Chuck just texted me. He wants to meet me on the roof.
Serena: The roof?
Blair: Well this way if he doesn’t say it back to me then I can just jump. And then he’ll be really sorry.
Serena: Oh no, don’t do it, B. You don’t want your obit to say you died in Brooklyn.

Chuck: What’s going on, Blair? You told me you had something to say to me. Say it.
Blair: Why do I have to be the one to go first? I was the one who waited on the helipad for you. I went to Tuscany alone.
Chuck: That’s ancient history.
Blair: I was the one who asked you to say it first.
Chuck: At the White Party? When you were on your way out with the Count? Did you really think I was going to say it then?
Blair: Yes! And when you didn’t I wanted to die.
Chuck: Don’t tell me you brought me all the way to Brooklyn for this. I thought you were ready to tell me how you really felt. Obviously this is just another one of your games.
Blair: My games? You’re the one who started this.
Chuck: And you’re the one who finished it.

Serena: Hey B. What happened?
Blair: It was a disaster, okay? I’m leaving.
Serena: I’ll come with you.
Blair: No, it’s fine. You stay. I just have to get out of here now.

Gossip Girl: What have we here? Jenny Humphrey caught in her knickers by Nate. Her knight in shining Armani.

Serena: Look, I’m sorry that Blair and Chuck messed with Vanessa. She doesn’t deserve that. But instead of hurting Blair you should have been honest with me.

Gossip Girl: The problem with fairy tales is that they set a girl up for disappointment. In real life, the Prince goes off with the wrong Princess. Or the spell wears off and two lovers realize they’re better off as… well, whatever they are.

Blair: Are you here to gloat?
Chuck: Over what?
Blair: Well you won. Pop the champagne.
Chuck: I didn’t win.
Blair: Then why does it feel like I lost?
Chuck: The reason we we can’t say those three words to each other is because they are true.
Blair: Then why?
Chuck: I think we both know the moment we do it will be the start of something and the end. Think about it. “Chuck and Blair going to the movies”. “Chuck and Blair holding hands”.
Blair: We don’t have to see those things. We can do the things that we like.
Chuck: What we like is this.
Blair: The game.
Chuck: That and I’m not sure how long we’d last. It’d just be a matter of time before we messed it all up. Look, I’d rather wait. And maybe in the future.
Blair: I suppose you could be some excruciating pleasure.

Gossip Girl: But I’ll confess. Every once in awhile a girl craves her fairy tale ending. So sleep tight, kiddies. It seems like Little J. got her happily ever after. XOXO —Gossip Girl