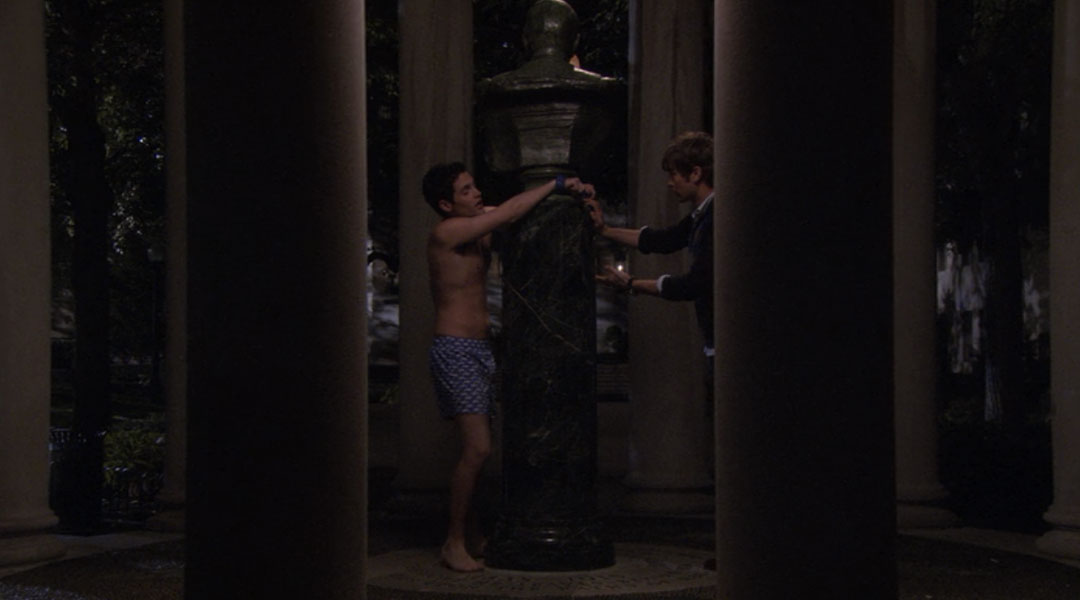 Gossip Girl: Rise and shine, early birds. Gossip Girl here. We all have dreams. Some good, some bad. Some fun and Freudian. And some are the dreams we’ve had our whole lives.

Blair: If there’s one thing I know it’s that I give good interview. I could make Larry King cry.

Dan: What do you think about this color?
Rufus: Of the paper? It’s white.
Dan: No no no. It’s ecru. That’s white. I like the ecru myself. But I’m not sure about the font.

Chuck: Will you lay off the formal visit crap and focus on what really matters. Creating your own Freshman Fifteen.
Nate: You’re not seriously considering going to Yale either?
Chuck: I’m, uh, evaluating colleges based on secret societies. Yale has the creme de la creme. The Skull and Bones. My goal is to get inside their inner sanctum.
Nate: And how exactly are you planning on doing that?
Chuck: By showing up.

Chuck: I wonder what lucky school will be the subject of the next nursery rhyme penned by Brooklyn’s lamest fiction writer.
Dan: Actually, Chuck, I think the Dean of Admissions at Yale will actually appreciate my ability to write about damaged characters.
Chuck: Looks like we’re spending the weekend together.
Dan: How nice.
Chuck: Say hello to the characters on public transportation for me.

Serena: So you’re off to Yale?
Blair: Your deductive reasoning skills are perfect for a place like Brown.
Serena: A place like Brown?
Blair: An enclave of trustafarians and children of celebrities who major in drum circles and semiotics. Whatever that is. I can’t wait for you to come home next Thanksgiving a militant veganista. Anemic and proud!
Serena: Brown is an Ivy League school.
Blair: Everyone knows that the only real Ivys are the Holy Trinity. Harvard, Yale and Princeton.
Serena: Well I know you may find this hard to believe, but not everyone wants to go to Yale because not everyone wants to be Blair Waldorf.
Blair: Not everyone can be.

Gossip Girl: Gossip Girl’s hardly a war buff, but I did cram for a quiz or two on the American Revolution. The last time New Haven was invaded was in 1779. Heads up, B. There’s a cannonball coming your way.

Gossip Girl: We hear there’s nothing like Yale in October. The crisp air, the turning leaves. The invasion of prospective freshman. Better hurry up, Lonely Boy. Your future’s waiting.

Dan: With its world class English department, Yale would be the ideal place for me to grow, to flourish, and, uh, thrive.
Dean Berube (Byron Jennings): Kudos to you and your inner thesaurus, Mr. Humphrey.

Skull and Bones (Matt Burns): Chuck Bass. Heir to Bass Industries. Champion of the legendary Lost Weekend. Rumor has it you’ve slept with more MAXIM covers than John Mayer.
Chuck: And better I might add.

Blair: Of all the things—Nate, my mom, the girls at school—you wouldn’t take this from me. Because if you do, I swear I will take you down.
Serena: I’m not taking anything from you, Blair. I was invited. And as for taking me down. I’d love to see you try.

Gossip Girl: When it comes to war, the rule is “Never retreat, never surrender”. But whoever said that, never met the new Serena.

Eleanor (Margaret Colin): I didn’t realize it was Bring Your Father to Work Day.
Rufus: Yes, well it was Jenny’s idea to show me why this was so important to her.

Eleanor: Do you remember the dreams you had when you were fifteen, Mr. Humphrey? What if they all started to come true? Would you have told them to wait?

Serena: Chuck, no. You just told me two things I never wanted to hear. And one is going to haunt me for the rest of my life.

Angela: Let’s just talk Cholera.
Nate: Um… very painful. {She laughs.} No, I’m not kidding. I tried to read it and I couldn’t get through it. It’s ridiculous.

Nate: Do you ever get tired of carrying around that chip around on your shoulder, Dan? No wonder Serena dumped you.

Gossip Girl: Poor S. She should know B’s rules by now. When someone leaves you off the list, don’t get mad. Get in.

Skull and Bones: You’ve got one hour. You want in. You bring us Nate Archibald.

Dean Berube: The person you would most like to have dinner with, living or dead is: Pete Fairman. I do not know this Pete Fairman.
Serena: He’s… he’s…
Blair: He’s the man she killed.

Serena: I hate this stupid headband!

Nate: I hope you at least bought the statue a drink first.

Blair: I’m sick of always looking like Darth Vader next to Sunshine Barbie. Life’s too short. And you make it feel so long.

Gossip Girl: From comrades to combat we thought we’d seen it all. But we’ve never seen this. Serena and Blair calling a cease fire. With so much scorched earth, can either side claim victory?

Blair: What are you doing here? Making sure the Dean knows it’s all my fault?
Serena: No. I came to tell him that Yale is your dream and you deserve to go here more than I do. What are you doing here?
Blair: Doing the same thing for you.
Serena: I was up all night thinking about the first time we came here together when we were nine. Your dad took us to that Harvard-Yale game and you tackled Senator Shumer’s daughter for wearing a Harvard sweatshirt.
Blair: I bet those grass stains never came out.
Serena: I don’t want to not know you. I can’t not know you.
Blair: Maybe we just had that fight because the reality of being separated next year is just too scary to think about.

Chuck: You may be the future leaders of America, but you’re under the control of Chuck Bass.

Gossip Girl: Dreams. Everybody has them. Some good. Some bad. Some you wish you could forget. Sometimes you realize you’ve outgrown them. Sometimes you feel like they’re finally coming true. And some of us just have nightmares. But no matter what you the dream, when morning comes, reality intrudes and the dream begins to slip away. Dream a little dream of me. XOXO —Gossip Girl.