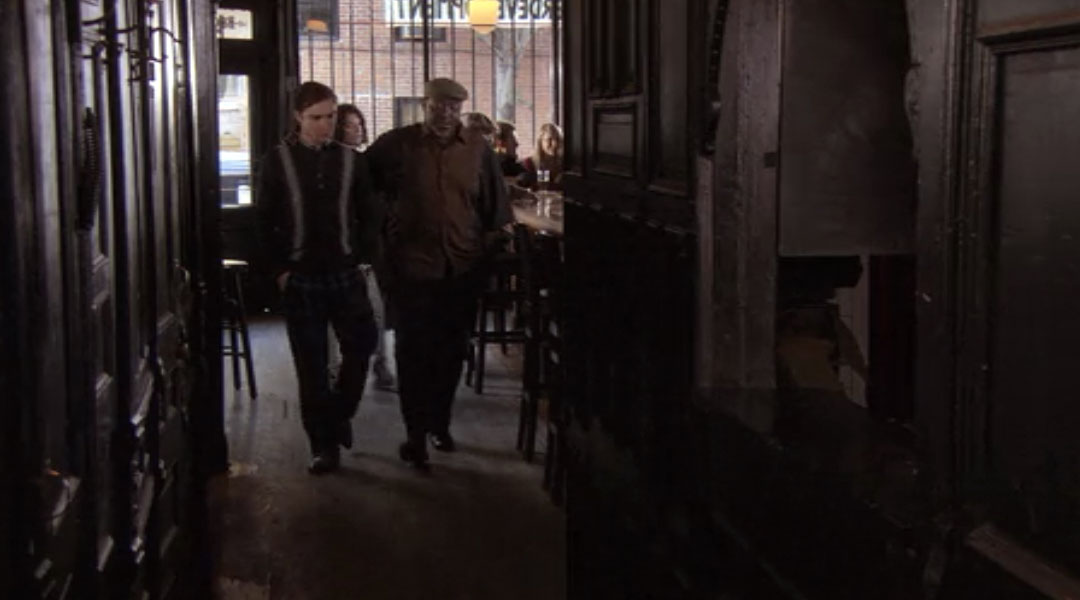 Gossip Girl: There’s nothing quite like Autumn in New York. But it’s not only the leaves that change. Something in the air brings out the true colors in everyone.

Bart (Robert John Burke): Did you get the little suit that I laid out for you, Serena?
Serena: That was for me? I thought the housekeepers got new uniforms.
Lily: Conservative, yes. But classic. Bart brought it from Paris. It had its own seat on his plane.
Serena: Bart bought me a suit?
Eric: New watch.
Chuck: Cash. Direct deposit into one of my offshore accounts.

Serena: What’s next, no TV until after you finish your homework?
Eric: They’re just a few rules, Serena. Who watches TV on the TV anymore anyway?
Serena: It’s not about the rules, Eric. It’s about mom. When it’s just the three of us it’s fine. But anytime she gets a new guy she Stepfords out and lets him make all the decisions.
Eric: I don’t think that’s what’s happening.
Serena: Remember when we had to move to [Chemany] because German Klaus wanted to ski all year round.
Eric: That wasn’t so bad.
Serena: Oh. What about Paolo? The raw food diet family. Colonics. Or Samir. I know I enjoyed our brief conversion to Islam.
Eric: I see what you mean.

Chuck: Isn’t it about time you ended this bromance? What happens at Yale stays at Yale.

Blair: Poor Chuck. What is life without a friend to share it. Oh. It looks like you just lost yours to Dan Humphrey.
Chuck: Who cares. I’d rather talk about who you lost yours to anyway.
Blair: Uh uh. Been there, done that. Been decontaminated.
Chuck: We both know you’ll do it again. It’s just a question of when.
Blair: The answer is Never.
Chuck: We’re inevitable, Waldorf.
Blair: Despite whatever vestigial attraction my body may feel for you, my brain knows better. And yours should too.

Kelsey Kelsey Kelsey. How many times must we tell you. As one of the girls at the steps you represent Constance royalty.
Iz: So it should come as no surprise that many girls before you have gotten the axe when their choices reflected poorly on us.
Kelsey (Whitney Vance): I didn’t realize.
Blair: That tights are not pants?!?! Honestly!

Vanessa (Jessica Szohr): Blair, you got a minute?
Blair: Sixty seconds, clock it. What are you doing here with those? Shouldn’t you be at Whole Foods?

Chuck: Waving the white flag are we?
Blair: Not exactly. I’ve got a proposition for you.
Chuck: I’ll say yes.
Blair: That little troll Vanessa is working my last nerve.
Chuck: Not what I expected.
Blair: And then I realized, this could benefit both of us.
Chuck: You had me until “troll.”
Blair: Dan stole your best friend. Now you can steal his. Seduce and destroy.
Chuck: What’s in it for me?
Blair: The thrill of the impossible. The only person Vanessa loathes more than me is you. It’ll be one for the ages.

Gossip Girl: This just in: Blair Waldorf and Chuck Bass placing a wager on the takedown of Lonely Boy’s BFF. We think we’ve heard this story before. And we’re pretty sure it ended up with everyone dead.

Dan: Dad, will you please tell Jenny that I have guy friends.
Rufus: Of course you do. I’m his—
Jenny: No. Not including you.
Rufus: There’s Cedric—
Jenny: Not including dolls.

Gossip Girl: Whoever said you can’t have it all must have known the Archibalds. Looks like poor little Nate is… yuck. Poor.

Gossip Girl: Careful B. One thing about making a deal with the Devil: he always comes to collect.

Chuck: Did you have a reason for coming here? Because if it was to insult me there’s a web site you can go to.

Horace (Chuck Cooper): This our guy?
Vanessa: Horace Rogers, meet Chuck Bass.
Horace: Man! Come here. {hugs him} Look at that outfit. Didn’t know it could be worse than the one this morning. Kidding. I know Savile Row when I see it. Joe Kennedy taught me.
Chuck: You knew Joe Kennedy?
Horace: Used to come in here all the time. Had a girl up the street. I was nine years old. Sellin’ papers out front. Rumor has it he kept this place in booze during Prohibition. So you like Ol’ Joe?
Chuck: Rum runner. Womanizer. Millionaire. He was my kinda guy.
Horace: They all used to come here here back in the day. Gangsters. Fighters. Musicians. Dangerous folks, no doubt. They had style. Something tells me you’d fit right in.
Chuck: That’s possibly the nicest thing anyone’s ever said to me.

Nate: Dan, we hung out at Yale, we played soccer once. So what? Just stay out of it.

Vanessa: Hey. I overheard the end of that conversation. And, I’m sorry. I don’t know your dad. But from what I saw today you deserve better.
Chuck: You say that. You don’t really know me. My father on the other hand has lifetime experience. He makes some good points.

Gossip Girl: Looks like the Bass housewarming party just got a little colder. Serena’s walk down memory lane has her heading out the door.

Blair: Bet’s off.
Chuck: This game’s not over.
Blair: I’m calling it on account of boredom.

Lily: I wasn’t that bad.
Eric: Our ringtone for you is “Since You’ve Been Gone”.

Gossip Girl: Poor Chuck Bass. You made your bet. Now you have to lie in it.

Serena: I’m sorry about everything.
Dan: I am too.

Gossip Girl: Just like the seasons, people have the ability to change. It doesn’t happen very often but when it does it’s almost always right.
Lily: You killed the story, didn’t you?
Bart: I already put out the hit.
Gossip Girl: Sometimes it takes what’s broken becoming whole again.
Rufus: What happened?
Gossip Girl: Sometimes it takes opening up to new people and letting them in.
Dan: Hope you don’t mind but we’ve got a lodger. So I’ll make up the sofa.
Jenny: I’ll get the ice cream.
Rufus: And I’ll get the guitar and the Songs of the 80s Fakebook. I’m thinking Wham! Almost forgot: make yourself at home.
Gossip Girl: But most times it takes just one person who is truly afraid to show what they feel. Getting an opportunity they never thought possible.

Blair: I’m prepared to settle.
Chuck: Maybe I’m not.
Blair: Chuck Bass. I will never say those words to you.
Chuck: Then you will never have me.
Blair: Is this because of Vanessa? It was a game, Chuck. That’s it.
Chuck: Maybe I want to raise the stakes. Are you ready to play that game? I chased you for long enough. Now it’s time you chased me.
Gossip Girl: And some things never change. Let a new game begin. XOXO —Gossip Girl