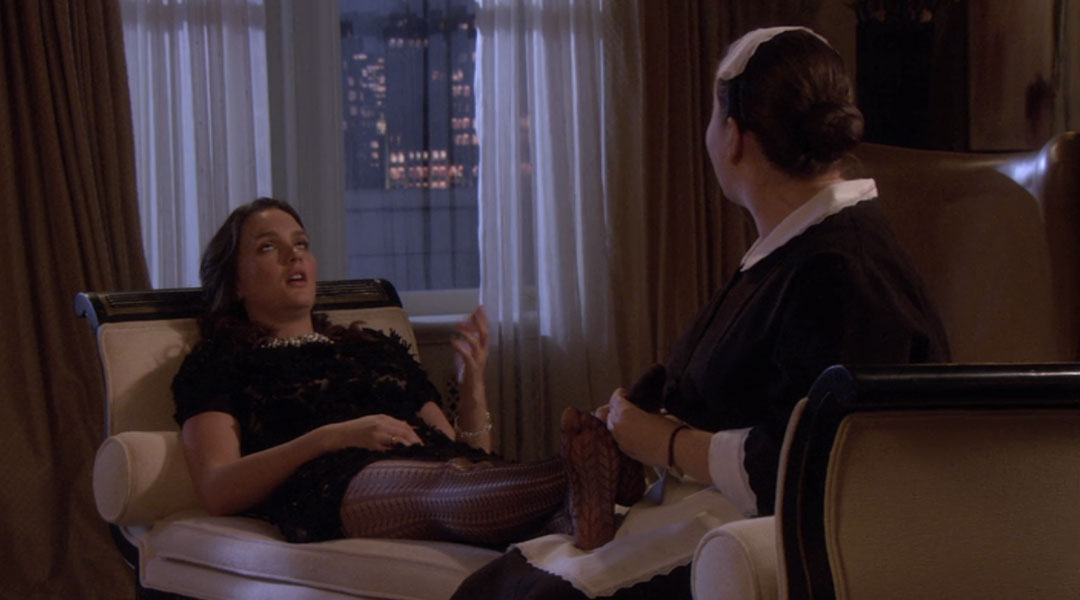 Gossip Girl: Once upon a time in the land called Upper East, a beautiful girl met a beast.

Gossip Girl: But while the beast locked himself in a tower of ennui, the girl found herself a prince. His name?

Blair: If you’ll excuse me, there’s a tart in my room I’d rather attend to.
Serena: Blair, this fight between us has gotten out of hand so why don’t I be the mature one and admit that I may have overreacted about you and Dan.
Blair: Really?
Serena: Yes. So let’s just put this all behind us so we can gush about Louis already.
Blair: Oh. Yes! Because all this elation was nearly meaningless without being able to talk to you about it.

Blair: This afternoon we’re going to church so I can be photographed being pious. I must find my pillbox hat! Je suis très heureux.

Nate: It’s four o’clock. It’s smoking jacket hour, man. Why are you still in your robe? Is everything okay?
Chuck: Peachy.
Nate: Oh come on, Chuck. I know you’ve seen the papers. Blair’s dating that prince guy. Can’t be easy.
Chuck: Nathaniel. I wish my problems were as simple as Blair’s royal fling.

Louis (Hugo Becker): I do need to tell you something. I didn’t tell you before because I didn’t want to scare you away. It may be too much.
Blair: Too much is just enough. Is it something I need a bikini for?

Princess Sophia (Joanne Whalley): What are you thinking? Out there all night with an American. Getting your picture taken?
Louis: I can explain.
Princess Sophia: It is unacceptable in any case. Especially for a young man who is about to be married.
Louis: Blair, please. Please let me explain.
Blair: I should have known not to believe.

Dorota: Maybe you hear wrong. Maybe she say “carry”. Maybe he getting carried.
Blair: That doesn’t even make sense.

Blair: Seriously? You think flowers make up for the fact that you’re engaged?
Louis: I’m not engaged yet. This is what I wanted to tell you. The royal court feels I should be married before taking my rightful place as Albert’s heir.
Blair: What? Well that’s outdated and old-fashioned and just… idiotic.
Louis: Well so is monarchy.

Eric: Come on. Acting like Blair never works for anybody except Blair. And besides, Blair has so many skeletons I highly doubt Louis’ mother is going to find her an acceptable princess-in-training.
Serena: Yeah. Yeah, you’re right. I have to go.
Eric: She says sneakily. Oh. Looks like B’s in for some hair gum of her own.

Dan: I take it lunch with the label went well.
Rufus: Yeah. They want me to have Panic—the name of band, also what’s gripping my insides—over for dinner tomorrow.
Eric: And you want to be the cool rocker guy.
Rufus: Come on, I was the cool rocker guy.
Eric: Yeah, but now the penthouse, the art, the millionaireness wife under house arrest doesn’t exactly scream street cred.

Blair: I would never bring ignominy to Louis.
Princess Sophia: Oh really? Seems to me that scandal is your middle name. You blackmail teachers, bully underclassmen, a pregnancy scare. You dated Lord Marcus while he was sleeping with his step-mother. Then you were traded by Chuck Bass—whose name precedes him—for an hôtel. I think this meeting is over.

Dan: I really like you, I do. I mean you’re smart and you’re cool. And kind of a spaz in a great way.
Charlie (Kaylee DeFer): Thank you?

Nate: Between the video tape you told me about and the letter from her mom. Chuck, I can’t let her get her hopes up. She’ll spend her whole life searching for someone she’ll never find.
Chuck: Don’t say anything.
Nate: What am I supposed to do every time she brings up her mother?
Chuck: Lie, I don’t know. You’ll figure it out. Or just stop seeing her.

Nate: You don’t even know how to be in a relationship. Blair’s lucky she escaped you.
Chuck: Hey! Leave Blair out of this. No one understands what we have.
Nate: Yeah, no one understands because it’s not normal. She’s better off with the French guy.

Blair: Louis is incredible. With him by my side I can actually be a powerful woman. Forget running Anne Archibald’s charity. I’m going to be negotiating peace in the Sudan.

Rufus: Okay, caviar and paté should be out soon. I just need to check one thing with the sommelier.
Eric: Ah, there’s a sommelier! Okay, your Fonzi jacket was a better idea than this.

Blair: Countess Alexia. So lovely to meet you. And how is your uncle, the Viscount? I heard he gave up his chair at the University over that unfortunate scandal with a student. I guess not everyone likes oral exams.

Blair: Chuck, go home!
Chuck: Match, Blair. You proved that you can score a prince. Okay, I admit you made me jealous. Now let’s go back to my place so you can collect your prize.
Blair: Stop this. You’re embarrassing me.
Chuck: What? It’s not me who’s disrespecting these fine people, it’s you! Pretending you’re going to marry this French phony. It’s a joke.
Serena: Chuck, no one’s laughing. Don’t do this.

Blair: In all my years of public humiliation—which, let’s face it, are many—that was the absolute worst.
Serena: Well maybe Louis will come around.
Blair: Perhaps. But his mother never will. And who can blame her. I should have known my past with Chuck would come back to haunt me.
Serena: You’re probably going to hate me for saying this, but as drunk and inappropriate as Chuck was, I still felt a little bad for him.
Blair: What? Why?
Serena: I don’t know. I guess I just always thought your prince was here. With his empire in Manhattan.

Blair: Louis made me happy. Happy. Do you know the last time I felt joy? Chuck had brought me into his darkness for so long I had forgotten what that felt like. And with all your Dan issues, it’s obvious you think your romantic fate was sealed in the eleventh grade but I’m growing up. I wanted something different. I wanted Louis.

Blair: I’ve seen all the movies, Louis. If you don’t get engaged to someone they want then they’ll find a way to make sure you never ascend to the throne.
Louis: There’s no point in being the head of state if it means I can’t follow my heart. Blair, will you marry me?

Dan: How’d it go with the band?
Rufus: You’re looking at Panic’s next producer.
Dan: What? That’s great! What’d you do?
Rufus: I did what I should have done in the first place: talked about music.

Gossip Girl: But in a land where the best castles come with a view of the park, it’s important to remember—
Blair: Mom? I’m sorry to wake you, but I have some news. I’m engaged.
Gossip Girl: Where most fairytales end, ours merely starts. XOXO —Gossip Girl.