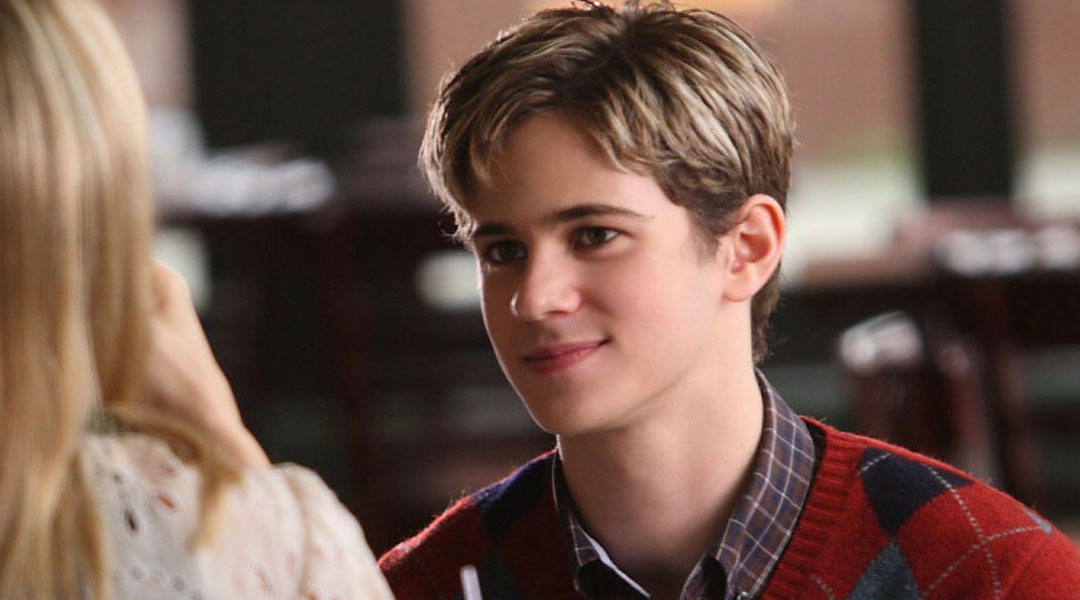 Eric: If it’s Apology Time you’re about three months too late. And let me guess, you want something.
Jenny: Um, yeah. Does it help if the new me just answered that honestly?
Eric: Not really.

Eric: “How well do you know Blair Waldorf?” is kind of boring for those of us that know Blair Waldorf.
Celia: Not to mention transparent.
Chuck: Well thank you, Grandma.
Celia: Why is it when you say that word it sounds like an insult.

Eric about Chuck: He’s got a PI on speed dial.

Serena marching over: Nate!
Eric: I know that face. That face is not your friend.

Eric: So you’re basically using Blair’s system to screen potential dates.
Chuck: Think of it as an early application process. There’s only so many slots in Chuck Bass’ social calendar. It’ll save me a ton of time.
Eric: Seems a bit impersonal.
Chuck: Thank you.

Serena: What’s next, no TV until after you finish your homework?
Eric: They’re just a few rules, Serena. Who watches TV on the TV anymore anyway.
Serena: It’s not about the rules, Eric. It’s about mom. When it’s just the three of us it’s fine. But anytime she gets a new guy she Stepfords out and lets him make all the decisions.
Eric: I don’t think that’s what’s happening.
Serena: Remember when we had to move to [Chemany] because German Klaus wanted to ski all year round.
Eric: That wasn’t so bad.
Serena: Oh. What about Paolo. The raw food diet family. Colonics. Or Samir. I know I enjoyed our brief conversion to Islam.
Eric: I see what you mean.

Lily: I wasn’t that bad.
Eric: Our ring tone for you is “Since You’ve Been Gone”.

Lawyer: I need to be sure you understand what “emancipation” means.
Jenny: I do. I’ve been researching it.
Eric: She’s made me watch Irreconcilable Differences like 15 times.

Bart: So how are things while we were away?
Eric: Um. Not so good. I don’t think it’s working out with Jonathan.
Bart: Huh. What do you know about someone at your school named Ben Shern?
Eric: He’s the, uh, captain of Jonathan’s swim team. Why?
Bart: Just, maybe you want to ask Jonathan what he was doing Monday night.

Eric: You’re home.
Chuck: My plans for the evening got held up at customs.
Eric: Your dad just insinuated that Jonathan might be dating someone else. How and why would he know that?
Chuck: He has a PI on retainer like I do.
Eric: I get that for business. But family. And friends of family, it’s just… creepy.
Chuck: Not to worry. Bart’s people are top notch and very discreet.

Eric about Bart’s safe contents: It’s like the end of every heist movie ever made. Are those gold bars? I didn’t think they actually made those. Is that— is that a sat phone?
Chuck: Correction. Only a prototype. Put it back.

Bart: Dan and his father just left to look for Jenny so maybe now would be the perfect time to tell me what the hell’s been going on here today, Lily.
Lily: You first.
Bart: Where did you get those?
Lily: It doesn’t matter. Did you read these?
Serena and Eric: Only mine.

Lily: The Annual Van der Woodsen Diner Thanksgiving Dinner. We should have a standing reservation.
Eric: I think we do.
Lily: What errand did Serena have to run?
Eric: I don’t know. But she took her file with her. Maybe she went to burn it.
Lily: I don’t blame her. I should have burned mine.
Eric: I lied before. I read it.
Lily: Oh, whatever you read, um—
Eric: I can’t believe you didn’t tell me you were in an institution. You were 19. Just a few years older than I was. After everything I went through last year.
Lily: Maybe I should have said something, but I wanted to be strong for you. Plus I really wasn’t ready to revisit it.
Eric: I look forward to talking about it. When you’re ready. It takes time, I know.
Lily: How did you get so wise?
Eric: The nanny.
Lily: Okay, how about we have a real Thanksgiving dinner. It’s not too late.
Eric: What did you have in mind?
Lily: Come on.

O Brother, Where Bart Thou?

Cecilia: Ah! Come. Eat. You need your strength.
Serena: I’m not hungry.
Eric: I’m saving room for later.
Cecilia: In times of great uncertainties it’s even more important that we continue our daily rituals.
Serena: You haven’t eaten a Cheerio since you’ve been here.
Eric: And we know that’s gin in your coffee cup.
Cecilia: My point exactly. Life must go on. As it always has.
Serena: How’s mom?
Cecilia: I took her some coffee and some toast. She didn’t sleep very much last night.
Serena: Or any night since it happened.
Eric: All she does is make lists and yell at people.
Cecilia: People mourn in their own ways.
Serena: What happens tonight when it’s all over and there’s nothing left for her to do?
Eric: Maybe she’ll move into The Palace and hole up with Chuck.
Cecilia: Ah, yes. The bottomless minibar and the comfort of the twins in room service. It’s a scandal.
Lily: People mourn in their own ways, Mother. I’ve been assured by the hotel that if Chuck isn’t alive and well, well… at least he’s alive.

Eric: We want you here. I just lost my stepfather. I don’t want to lose my brother too.
Chuck: When are you going to get it? We are not related.

In the Realm of the Basses

Eric: So you really haven’t thought about it? Jenny!
Jenny: Yeah?
Eric: I asked if you’re nervous about Penelope and the mean girls.
Jenny: Please. Eric, really. In the last four months I’ve faced down Eleanor Waldorf, I’ve hijacked a society gala, had my entire collection torched by a crazy model and was basically homeless. So I can handle high school.

Eric: So Nelly Yuki is the new old Jenny Humphrey.

Jenny: They treat her like their servant.
Eric: And it is none of your business. It’s a new year, remember? New leaf, new Jenny Humphrey.
Penelope proffering a scuffed shoe: Um, Nelly. Nelly cleans her shoe
Jenny: Okay, no. That’s not okay.
Eric: And here we go.

Eric: Welcome back. How was Thailand?
Chuck: I honestly don’t remember.
Eric: You should come home, Chuck.
Chuck: I think I’ll take in the view from above. It was nice having you as my little brother.

Nelly: Okay, big miscalculation. See, I kinda thought coming back to school you did want to be queen.
Eric: Oh, that’s not good.
Nelly: And I was never going to move past Hazel and Iz. But I thought maybe if there was a new regime—
Jenny: Wait. You played me? You? Nelly Yuki?

Gone with the Will

Eric: Three times this week I planned a dinner with Jonathan and every time Jenny just happened to show up.
Serena: Well she doesn’t have anyone else. All the mean girls hate her. You gotta give her time to make new friends.
Eric: But doesn’t she understand the whole point of having a boyfriend is to be alone.
Serena: Yeah, seems to be a problem with the entire Humphrey clan.

Eric: Have you spoken to mom yet?
Serena: No. It went straight to her voicemail.
Eric: Yeah, me too. Are you okay?
Serena: Not really. I’m so mad at her for keeping this from us but at the same time I feel incredibly sad for her and Rufus.
Eric: I know. Sounds like it’s got Grandma written all over it.
Serena: And reeks of gin and Chanel No. 5.
Eric: It is so weird that we have a half… something.
Serena: And so do Dan and Jenny.
Eric: Are you and Dan going to be okay?
Serena: I don’t know. I had enough trouble with the idea of mom and Rufus dating, but now I share a sibling with my boyfriend. That’s little more hillbilly than I can handle.
Eric: It is a little twisted. But so what?
Serena: Well what if we can’t get past it?
Eric: I don’t know. But you can’t push Dan away right now. Whatever you are going through he’s going through the same thing.

Eric: I’m really sorry. There, I said it first!
Jenny: Thanks. But uh, I really should be the one to apologize. I mean, you have every right to want to be alone with Jonathan.
Eric: That doesn’t mean you get on my nerves.
Jenny: That’s okay. I want to get on your nerves.

Eric: I would say “get a room”. But yours is right above mine. Please try to remember that.

Remains of the J

Dan: What does Chuck Bass do at 8 am? It’s not like you work out.
Chuck: I do my cardio in the evenings. Morning is for business. For which I’m late. So if you’ll excuse me.
Eric: Does this feel like a sitcom to anybody else?

Lily: We heard you had one of those last year and it didn’t go so well.
Eric: Oh… Jenny Cake.

Jenny: Enjoying my party?
Eric: You know I was just saying to Jonathan that this is a lovely intimate family gathering.
Jonathan: Nothing says “Jenny Humphrey” like a customized cocktail napkin.

Cece: Eric and I had the most invigorating walk from the hotel.
Eric: You know, Grandma is deceptively quick.
Lily: Oh she’s probably racing back to that bottle of gin she has hidden under the sink in the bathroom.
Eric: Zing.
Cece: Good morning to you as well.

Cece: What have I done to earn your ire, my dear?
Lily: Let me think for a second. Maybe telling Rufus about our child.
Cece: I’m sorry if I thought it appropriate that Rufus learns he has a son.
Eric: You mean “had”.
Lily: He died.
Cece: Oh. I had no idea.
Lily: Imagine. Something you don’t know.