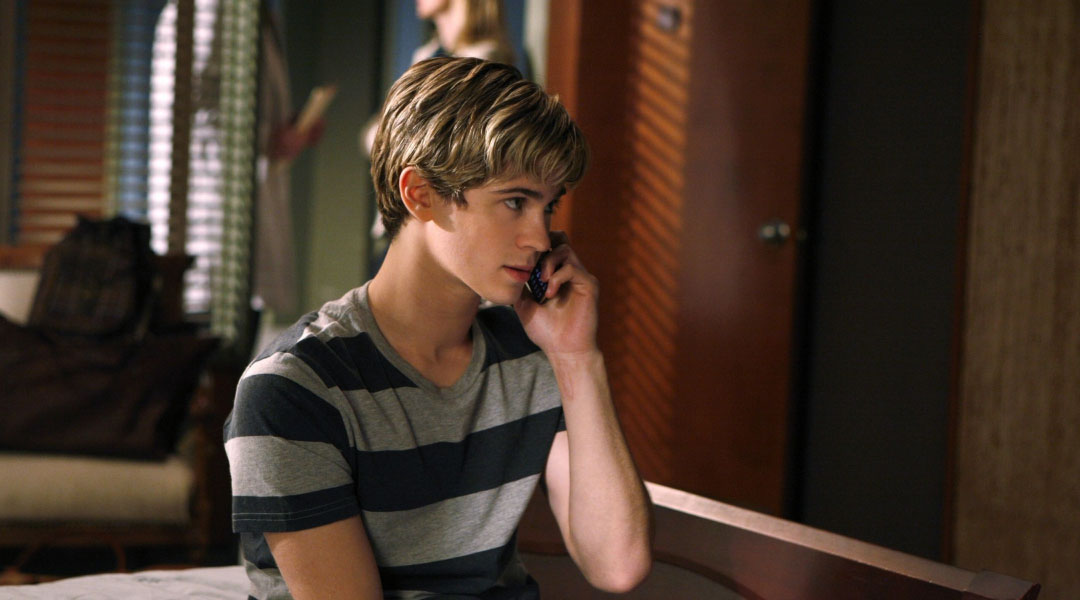 Eric: Well I found it. And just in time: the car’s here. Now it’s time to go… get you dressed.
Jenny: No, I’m not leaving.
Eric: I don’t think we have a choice.
Jenny: As soon as we get in that car that means no more beaches and no more bonfires and no more stalking the Barefoot Contessa through 1770 House. Our summer in the Hamptons is officially over.
Eric: So, uh, a sit in.
Jenny: More like a lie-in. At least until the sun goes down.
Eric: You sure your dad doesn’t know?
Jenny: No, totally. I mean, we hid all the evidence. Look, Dan doesn’t even know. He was pre-reading all his books for college. And I snuck onto his laptop and might have disabled his Serena van der Woodsen Google Alert.
Eric: But what happens when we get back to the city?
Jenny: Then it’s Serena’s problem. As for now we made her a promise. And it is very important to keep those. Even if they were asked via drunken text from a Turkish pay-as-you-go phone.

Dan: Our bags are packed, the house is closed up, but the real question remains: now that you’ve spent your whole summer drinking your coffee out of Cece’s china will it taste as good coming out of your Welcome Back Kotter mug at home?
Rufus: Sure it was great out here but I like the real world too. Well I mean since we’ll be at Lily’s it’s the better smelling, better thread count version of the real world but still. Hey, you guys aren’t ready? Serena’s going to be home by six.
Eric: How can she even greet us when she gets here? Isn’t she taking a vow of silence for her month at the ashram?
Dan: I don’t know, that eat-pray-love thing of hers is awesome but I just highly doubt she can keep her mouth shut for a whole month.
Rufus: Even so, it’s time to leave. And I think her month is up.
Dan: Yeah, I need to meet up with Vanessa too, because I think she has something to tell me about how she spent her summer.
Wasn’t she in Europe with Nate?

Eric: “Mrs. Jennifer Humphrey”. When did you get married?
Jenny: It doesn’t matter. It’s engraved.

Jenny: Hi. Who are you?
Carmen: I’m Carmen. This is Celeste. That’s Jane.
We’re here to make sure you get exactly what you want this year.
Celeste:
You’re going to rule the school with an iron fist.
Jenny: Okay enough. First go wash your eyes. And second, tell everyone I need to talk to them now. Now.
Eric: So. A new era of sunlight and fairness.

Eric: Okay, unless I’m blind their headbands were monogrammed with BW.

Serena: Hey, what’s going on with mom and Rufus?
Jenny: You don’t know? They’ve been in a cold war since the day you left.
Serena: Over Brown?
Eric: On the surface, yeah. But I have a feeling mom’s flipping out over other things too.
Jenny: I think they could be in real trouble.

Lily: You’re kidding.
Rufus: I knew I let you kids watch The Parent Trap too many times.
Dan: It’s time for you two to talk.
Jenny: You love each other.
Serena: And it’s not Rufus’ fault I made the decision not to go to Brown.
Eric: Can you please sit down. For us.
Lily: Well I do love the bolognese here.

Scott: Sorry for not telling you who I was.
Dan: You know, I should have guessed. No one under 40 has ever shown that much interest in Lincoln Hawk.
Jenny: See, I told you. He has my nose.
Eric: Maybe. But those are my eyebrows.
Jenny: So Scott, what do you think about board games?
Scott: Love them.

How to Succeed In Bassness

Eric: So Rufus asked my size this morning. Does this mean I’m getting a flannel?
Jenny: No. He’s just a costume enthusiast. He likes Halloween more than he likes Christmas and his birthday. So we have to find a party otherwise I swear he’s going to make us hand out candy dressed as the Octo Babies.

Jonathan: Hello Invasion of the Body Snatchers. Looks like Jenny, sounds like Jenny, is really a dark, power hungry monster.
Eric: Oh c’mon. She’s still the same Jenny
underneath. She just has to wear the mask for school.
Jonathan: That mask is becoming her face.

Jenny: You know I have to act this way about school stuff. But I’m still your friend, I’m still your sister. We just can’t let the worlds get confused.
Eric: I’m not confused. I want nothing to do with you in either world.

They Shoot Humphreys, Don’t They?

You’re Jenny Humphrey’s brother, aren’t you?
Eric: That seems to be my new claim to fame.

Eric: It helps if you count out loud.
Jenny: Eric you don’t have to be nice to me. I’ve been so awful to you and Jonathan.
Eric: It’s true. But I’m a better person than you are.
Jenny: That’s also true.

Jonathan: I liked you because you were different from everyone else. You were smart and you knew who you were. You didn’t need to prove anything to anyone. And now— I’m sorry Eric, but it’s over.

The Treasure of Serena Madre

Eric: Our Thanksgivings tend to end with french fries at a diner and someone having been in a mental institution.

Jenny: Blair told me you were responsible for sabotaging me at Cotillion. What? You have nothing to say to me?
Eric: Your sweet potatoes. Are bland.

Eric: You know Jenny said that if she was chosen to be queen things would be better. But if you think about it things are actually worse.
Blair never banished a girl for getting a gift.
It is almost Christmas.
Eric: Right. There could be wish list carnage. Think about it.

Jenny: You want a sip of my coffee?
Eric: No. Thanks.
Jenny: I was just offering.
Eric: I’m just declining the offer.

Eric leaving a message: Hey Jenny It’s me. Ah. I just wanted to remind you that Nate needed to be here no later than an hour ago. Bring him to the party. Right now.

Elliot: Hey. There you are. I think you lost this.
Eric: How’d you know what apartment I was in?
Elliot: Well I started on the first floor and worked my way up. You do realize that this is the penthouse, right?
Eric: I’m Eric.
Elliot: I’m Elliot.

The Unblairable Lightness of Being

Elliot: Hi Eric.
Eric: Hi. Elliot. What are you doing here?
Elliot: I love Dorota. We’re tight now. We talked about The Vampire Diaries in the elevator on Friday.

Elliot: Hey. Wanna dance?
Eric: Um. Shouldn’t you be doing that with your girlfriend?
Elliot: Chelsea took off. We kind of got into a fight.
Eric: I’m sorry.
Elliot: I’m not. She was mad because I kept talking about this guy that I met in the lobby of my building. And then I dragged her out to Queens. I guess I’m a little obsessed.
Eric: I don’t get it. You like girls.
Elliot: But I also like boys. And I like you.

Will: So I hope you’ll all join me for this Doctors Without Borders gala tomorrow at Columbia. I must admit I feel a bit silly about the whole thing. Clearly Columbia has run out of alumni to honor if the best they could come up with is me.
Eric: False humility: check.

Eric: What? He left when I was two. The man’s a total stranger to me.
Serena: You have to at least give him a chance.
Eric: No. I don’t.

Eric: Please stop acting like you and I have any kind of relationship.
Will: You’re right, I have a lot to make up for.
Eric: I’m sorry. The window for that closed somewhere between my twelfth birthday and my suicide attempt. Don’t worry, I’m fine now. Going through all that without a father made me realize that I don’t need one.

Eric: You’re not at the gala?
Rufus: I thought it’d be best for everybody if I didn’t go.
Eric: Ah, I see my father is still working his magic.
Rufus: It’s not all him.
Eric: Yes, it is. It’s just that no one else sees it. You make my mom happier than all of her ex-husbands combined. It should be you with her tonight, not some guy who pulled a disappearing act.

Eric: Is my mom really sick? Right now that’s all I want to know.
Will: Of course she was sick. To even imagine that I would prescribe your mother medication that she didn’t need? That’s preposterous. I’ve got the files in my bag. Do you want to see them?
Serena: You don’t have to prove yourself.
Will: Apparently I do. Excuse me.
Lily: William.

Rufus: I didn’t cheat on you, Lil. I would never cheat on you.
Lily: Rufus—
Eric: So she’s not sick? I just want to be clear.
Rufus: She’s not sick anymore.
He’s been lying since he got to New York. To all of us.
Eric: Do you think he’s even coming back?
Serena: Yes, of course he is. You heard what he said. I’m sorry, Mom. I don’t want you to be sick. But Dad is not lying to us.

Eric to Jenny: If you don’t want to be a part of this family, no one is forcing you to stay.

Lily: Rufus, teenage girls are a nightmare. As soon as they realize you love them no matter what you do, you lose all your power. You just have to wait until they finish college. Or, in the case of Serena, rebel and not go. Just talk to her. Is she in her room?
Rufus: No. I sent her to the loft to stay with Dan so I could consider the best course of action.
Lily: Well grounding her again probably won’t work.
Rufus: Short of sending her away I don’t know anything else that will.
Lily: Well I think that would be a mistake. And I would hate to separate her and Eric. They need each other.
Eric: Don’t worry about me. After what I witnessed yesterday, you can do whatever you want with Jenny.

Jenny: There’s nothing here for me anymore.
Eric: I’m here. Don’t go.
Jenny: Eric…
Eric: You may be a total bitch sometimes but you’re still my best friend. What am I going to do next year at school without you? Who’s going to dump yogurt on my head?