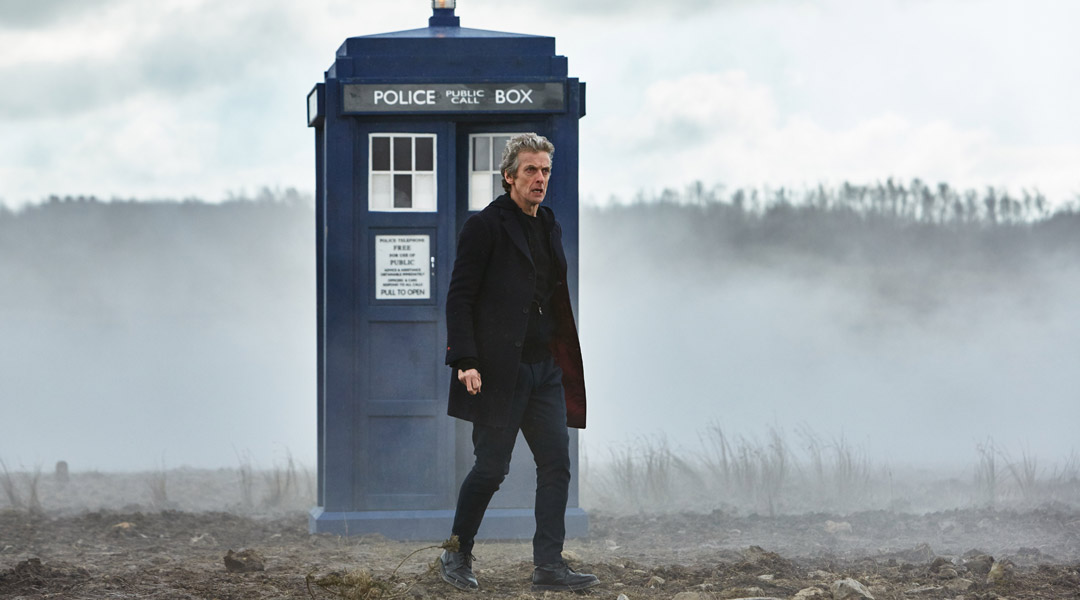 The Doctor: Your chances of survival are about one in a thousand. So here’s what you do: you forget the thousand and you concentrate on the one. {about the screwdriver} Pick it up. I said, pick it up. I’m straight ahead of you about 50 feet. Can you see me? The device in your hand is creating an acoustic corridor. So that we can talk. Do you understand?
Young Boy (Joey Price): Who are you?
The Doctor: Oh, I’m just a passerby. I was looking for a bookshop. How do you think I’m doing?
Young Boy: This isn’t a bookshop.
The Doctor: No, this is a war. A very old one, going by the mix of technology. Which war is this? I get them all muddled up.
Young Boy: Just “The War”.
The Doctor: Where am I? What planet is this?
Young Boy: I don’t understand.
The Doctor: Oh well neither do I. I try never to understand. It’s called an open mind.

The Doctor: What’s your name? Come on! Faith in the future! Introduce yourself! Tell me the name of the boy who isn’t going to die today.
Young Davros: Davros. My name is Davros. silence. Hello? Are you still there? Please, you’ve got to help me! You said I could survive. You said you’d help me! Help me!

Bors (Daniel Hoffmann-Gill): Dude. What is that?
The Doctor: You said you wanted an axe fight. {silence} Oh come on! In a few hundred years that’ll be really funny. It’s a slow burner.

The Doctor: Well we’ve partied! I helped you dig a well, with a first-class child-friendly visitor’s center. I’ve given you some top-notch maths tuition in a fun but relevant way. And I’ve also introduced the word “dude” several centuries early.

Clara: How did you know I was here? Did you see me?
The Doctor: When do I not see you?
Clara: What, one face in all of that crowd?
The Doctor: There was a crowd too?
Clara: Wow, we’re doing charm as well now, are we? Which one of us is dying? {he grabs and hugs her} Okay, And we’re doing hugging now too. Can’t keep up.
The Doctor: Well you know what they say. Hugging is a great way to hide your face.
Clara: Okay, look, I guessed a party but not like this. What is this? This isn’t you.
The Doctor: I spent all day yesterday in a bow tie. The day before in a long scarf. It’s my party and all of me is invited!

Colony Sarff: Doctor. Your friends have lead me to you. You will come.
The Doctor: Says you and whose army?

Colony Sarff: Davros, Creator of the Daleks, Dark Lord of Skaro, is dying.
The Doctor: So I hear.
Colony Sarff: He would speak to you again on the last night of his life.

Colony Sarff: Are you so dangerous, little man?
The Doctor: You want to know how dangerous I am? Davros sent you. You know how stupid you are? You came. {he hisses} Is that supposed to frighten me? Snake nest in a dress. Now explain politely. Davros is my archenemy. Why would I want to talk to him?
Missy: No, wait. Hang on a minute, Davros is your arch enemy now?
The Doctor: Hush.
Missy: I’ll scratch his eye out.

Colony Sarff: Davros knows. Davros remembers. {he tosses his screwdriver}
Clara: That’s yours.
The Doctor: Uh. It was.
Clara: Was?
The Doctor: I don’t have a screwdriver anymore.
Missy: Oo… never seen that before. Doctor, the look on your face. What is that?
Clara: Shame. You’re ashamed. Doctor. What have you done?

Missy: Doctor, listen to me. I know traps. Traps are my flirting. This is a trap.
The Doctor: I am prepared.
Missy: You sent your Confession Dial. You threw yourself a three-week party. You know what this is.
The Doctor: Yes. Goodbye. Goodbye, Clara.
Clara: We’re coming with him. Both of us. Her and me. {they both stand next to the Doctor}
The Doctor: No! No! Under no circumstances. What are you doing now?
Colony Sarff: Voting. We are a democracy. It is agreed.

The Doctor: Davros is the Child of War. A war that wouldn’t end. A thousand years of fighting ’till nobody could remember why. So Davros, he created a new kind of warrior. One that wouldn’t bother with that question. A mutant in a tank that would never ever stop. And they never did.
Clara: The Daleks?
The Doctor: How scared must you be, to seal every one of your own kind inside a tank. Davros made the Daleks. But who made Davros.

Clara: What is that?
The Doctor: I don’t know. A hospital?

Clara: How long have we been waiting?
The Doctor: Who knows. That’s always the way with hospitals.

Clara: Doctor. You sent Missy your Confession Dial.
The Doctor: Well. We’ve known each other a long time and she’s one of my own people.
Clara: My point is, we both saw her die on Earth, ages ago, and obviously you knew that wasn’t real, or worse, hoped it wasn’t. Either way, I think you’ve been lying.
The Doctor: I’m sorry.
Clara: Don’t apologize. Make it up to me. There, see? Huh. Now you have to come back.

Davros: You came then.
The Doctor: Clearly.
Davros: Did you suspect a trap?
The Doctor: I still do.
Davros: Then why are you here? Did you miss our conversations? {he replays past conversations with past Doctors}

The Doctor: I get the point!
Davros: Do you know why you came, Doctor? You have a sense of duty. Of guilt perhaps. And certainly of shame.
The Doctor: You flatter me.
Davros: Pity. I intended to accuse.

Davros: I believe that for the ultimate good of the Universe I was right to create the Daleks.
The Doctor: You were very wrong.
Davros: This is the argument we’ve had since we met.
The Doctor: It ended in the Time War.
Davros: It survived the Time War, but it will end tonight. That is why you are here. {sirens sound} It seems your friends have gone exploring.

The Doctor: Skaro! You brought me to Skaro!
Davros: Where does an old man go to die, but with his children.

The Doctor: Why have I ever let you live?
Davros: Compassion, Doctor. It has always been your greatest indulgence. Let this be my final victory. Let me hear you say it just once. “Compassion is wrong.”