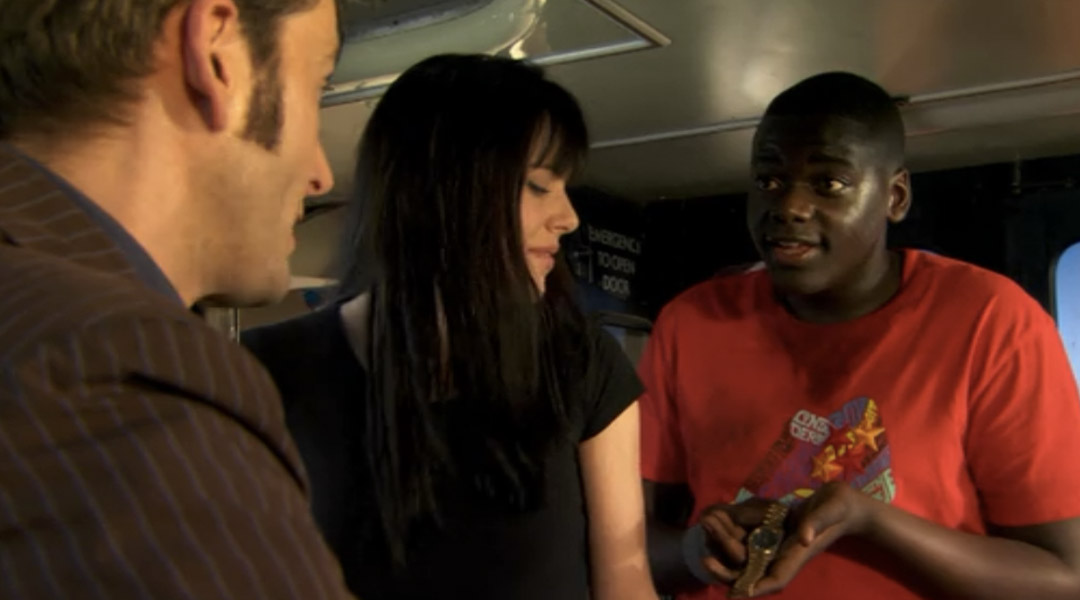 Christina (Michelle Ryan): So terribly sorry. That card-paying device thing. That’s a lobster card, am I right?
Bus Driver (Keith Parry): Oyster card.
Christina: Ah that’s the problem you see. I only use my oyster when there’s an “R” in the month.
Bus Driver: It’s April.
Christina: Diamonds. Genuine. Drive.
Bus Driver: Works for me.

The Doctor: Funny thing is, I don’t usually do Easter. I can never find it. It’s always at a different time. Although! I remember the original. Between you and me, what really happened was—

The Doctor: Rundium particles. That what I’m looking for. This thing detects them. That little dish should go around. That little dish there.
Christina: Right now a way out would come in pretty handy. Can you detect me one of those?

The Doctor: Call it a hunch but I think we’ve gone a little bit further than Brigstown.

Carmen: I’m not going out there. They’re still calling. All around us. The voices are cryin’.
Lou: What voices, sweetheart?
Carmen: The dead. We’re surrounded by the dead.

Christina: Ready for every emergency.
The Doctor: Me too.

Christina: You’re called the Doctor?
The Doctor: Yes I am.
Christina: That’s not a name, that’s a psychological condition.

Barclay (Daniel Kaluuya): Hold on a minute. I saw you man! You had that thing— that thing. Did you make this happen?
The Doctor: Oh… humans on buses. Always blaming me. Look if you must know I was tracking a hole in the fabric of reality (call it a hobby) but it was a tiny little hole. No danger to anyone.

Christina: Then we have to drive five tons of bus—which is currently buried in the sand—and we’ve got nothing but our bare hands. Correct?
The Doctor: I’d say nine and a half tons. But the point still stands.

Lou: She’s got a gift. Ever since she was a little girl. She can just tell things. We do the lottery twice a week.
Christina: You don’t look like millionaires.
Lou: No. But we win ten pounds. Every week, twice a week, ten pounds. Don’t tell me that’s not a gift.

The Doctor: It’d be easier if you left that backpack behind.
Christina: Where I go it goes.
The Doctor: Backpack with a spade and an ax. Christina, who’s going so far away and yet scared by the sound of a siren. Who are you?
Christina: You can talk. Let’s just say we’re two equal mysteries.
The Doctor: We make quite a couple.
Christina: We don’t make any sort of couple, thank you very much. C’mon then, tell me. If Carmen’s right—that wormhole’s not an accident—then what is it? Has someone done this on purpose.
The Doctor: I don’t know. But every single instinct of mine is telling me to get off this planet right now.
Christina: Do you think we can?
The Doctor: I live in hope.
Christina: That must be nice.

Captain Magambo (Noma Dumezweni): Captain Arissa Magambo, sir. Might I say sir. It’s an honor. She salutes
The Doctor: Did you just salute?
Captain Magambo: No.

It’s the Doctor.
Dr. Malcolm Taylor (Lee Evans): No, I’m alright now, thanks. It’s just a bit of a sore throat. I gotta be honest, a cup of tea might be nice.

Dr. Malcolm Taylor: Cor, blimey! I can’t believe I’m actually speaking to you. I mean I’ve read all the files.
The Doctor: Really? What was your favorite? Giant robot? No no! Let’s sort out that wormhole.

The Doctor: Since I’ve met you Christina we’ve been through all the extremes.
Christina: That’s how I like things. Extreme.

The Doctor: Incredible. They swarm out the wormhole, strip the planet bare, and then move on to the next world. To start the life cycle again.
Christina: So… they make the wormholes?
The Doctor: They must do.
Christina: But how? They don’t exactly look like technicians. And if the wormhole belongs to them why are they a hundred miles away?
The Doctor: Because they need to be? Oh that’s bonkers.

Christina: How does the crystal drive the bus?
The Doctor: In a… super clever outer-spacey way.

Christina: The aristocracy survives for a reason. We’re ready for anything.

Christina: It’s over a thousand years old. Worth 18 million pounds. Promise me you’ll be careful.
The Doctor: I promise. gingerly lifts the cup from his hands and proceeds to bang the crap out of it
Christina: I hate you.

Carmen: Doctor. You take care now.
The Doctor: You too. Chops and gravy. Lovely.
Carmen: No. You be careful. Because your song is ending, sir.
The Doctor: What d’you mean?
Carmen: It is returning. It is returning through the dark. And then Doctor— Oh but then… He will knock four times.

DI McMillan (): I’m charging you too. Aiding and abetting.
The Doctor: Yes. I’ll just step inside this police box and arrest myself.

Christina: We could have been so good together.
The Doctor: Christina! We were.