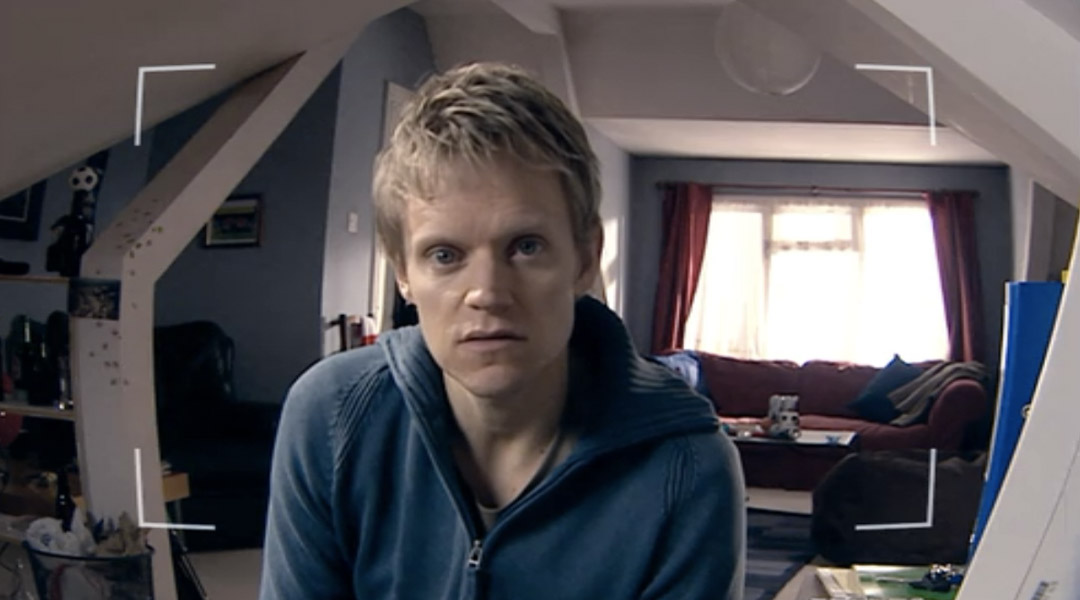 The Doctor: You made it worse!
Rose: You said blue!
The Doctor: I said not blue!

Elton (Marc Warren): You can’t imagine it—the Doctor’s machine. The most beautiful sound in the world. That wasn’t the first time I met the Doctor. And it certainly wasn’t the last—oh no. I just put that bit at the beginning because it’s a brilliant opening. But this is the story of me. And my encounters with alien life forms. But be warned, because it is gonna get {he leans in} scary. I need a remote control zoom. I’m having to do that with a lean {he leans in again} Scary! But don’t worry, ’cause it’s not just me sitting her talking. Oh no!

Ursula Blake (Shirley Henderson): So what happened? Elton. tell me, why was he there?
Elton: I don’t know. I still don’t know.

Elton: Alright, first things first. My name is Elton. Not to be confused with {shot of Elton John}. I left school, got a job—transport manager, retail logistics. Modest little haulage company. Perfectly normal life. And then it all went mad!

Elton: I should say, this isn’t, you know, my whole life. It’s not all space ships and stuff. ‘Cause I’m in to all sorts of things. I like football, I like a drink, I like Spain. And if there’s one thing I really, really love, then it’s Jeff Lynde and the Electric Light Orchestra. ‘Cause you can’t beat a bit of ELO.

Elton: So we’d all meet up every week and we’d talk about the Doctor for a bit. But after awhile Bridget started cooking. Next thing you know, Mr. Skinner started his readings. ‘Cause he was writing his own novel. Time went on, we got to know each other better and better.

Elton: Then it turned out that Bridget could play the piano. And I confessed my love of ELO. Next thing you know, Musical LINDA!

Elton: And that’s when it all changed. That Tuesday night in March. That’s when he arrived. That’s when we met Victor Kennedy. The Golden Age was gone.

Elton: Sorry, don’t mind my asking. But who are you?
Victor Kennedy (Peter Kay): I am your salvation.

Kennedy: You’ve heard it before, haven’t you. When? When was it?
Elton: I’d forgotten.

Elton: We were wondering—no sign of Bliss. Do you know where she is?
Kennedy: Yes, didn’t she tell you? She’s getting married. Left a message. It’ll never last. Stupid girl.

Ursula: Use a cane on him and you’ll get a hell of a smack off me! And then a good kick. Is that completely understood, Mr. Kennedy?
Kennedy: Duly noted. “Ursula Blake: most likely to fight back.”

Elton: And so it began. The impossible task. To scour the mean streets. To search a major capitol city for an unknown girl. To hunt down that face in a seething metropolis of lost souls. To find that one girl in ten million—
Neighbor: Oh! That’s Rose Tyler. She lives just round there.

Mr. Skinner (Simon Greenall): You’ve achieved steps one through four in precise order. How did you manage it?
Elton: I had to work very hard. She keep everything very close to her chest.
Ursula: That’s a hell of a chest.

Elton: You’re… a thing.
Mr. Kennedy: A thing? This thing is my true form. Better than that crude pink ship you call a body.

Elton: You’re some sort of… Absorbathon. An… Absorbaling. Abzorbaloff.
Abzorbaloff: Yes! I like that.

The Doctor: Someone wants a word with you.
Rose stepping out of the TARDIS: You upset my mum.
Elton: Great big absorbing creature from outer space and you’re having a go at me?
Rose: No one upsets my mum.

Abzorbaloff: You see I’ve read about you, Doctor. I’ve studied you. So passionate, so sweet. You wouldn’t let an innocent man die. And I’ll absorb him. Unless you give yourself to me.
The Doctor: Sweet, maybe. Passionate, I suppose. But don’t ever mistake that for nice. Do what you want.
Abzorbaloff: He’ll die, Doctor!
The Doctor: I know.
Abzorbaloff: So be it.
The Doctor: Mind you, the others might having something to say.

Elton: So. There you go. Turns out I’ve had the most terrible things happen. And the most brilliant things. Sometimes, well, I can’t tell the difference. They’re all the same thing. They’re just me.

Elton: Maybe that’s what happens if you touch the Doctor. Even for a second. I keep thinking of Rose and Jackie. And how much longer before they pay the price.

The Doctor: Elton! Fetch a spade!

Elton: It’s a relationship of sorts, but we manage. We’ve even got a bit of a love life.
Ursula: Oh, let’s not get into that.