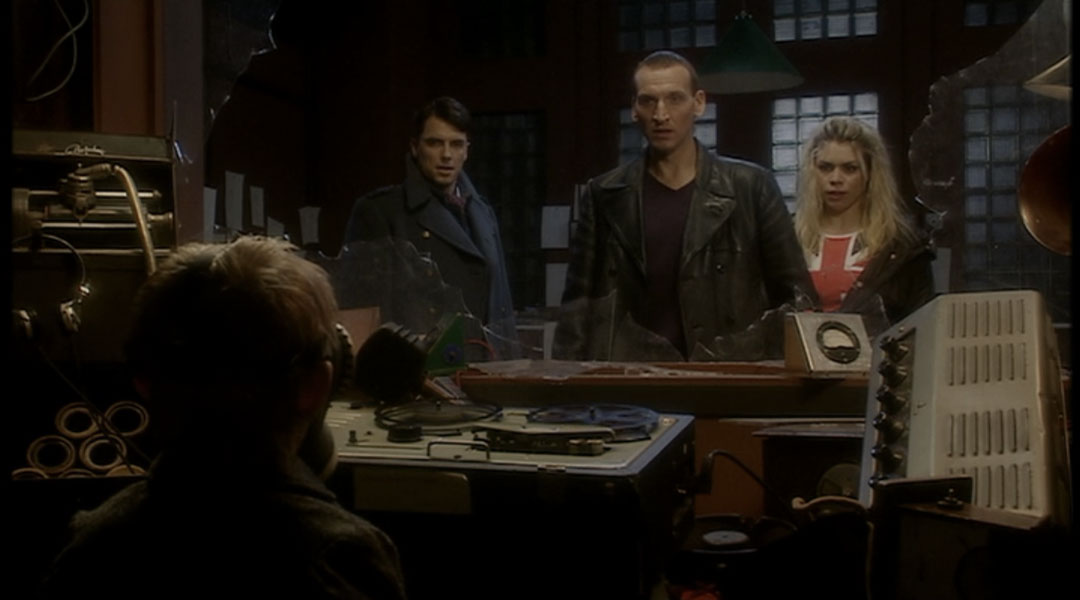 Captain Jack: The London Blitz is great for self-cleaners. Pompeii’s nice if you want to make a vacation of it though. But you gotta set your alarm for Volcano Day.

Captain Jack: I don’t know what’s happening here, but believe me, I had nothing to do with it.
The Doctor: I’ll tell you what’s happening. You forgot to set your alarm clock. It’s Volcano Day.

The Doctor: Sonic Blaster. 54th century. Weapons factory at Villengard?
Captain Jack: You’ve been to the factories?
The Doctor: Once.
Captain Jack: Well they’re gone now. Destroyed. Main reactor went critical. Vaporized the lot.
The Doctor: Like I said: once. There’s a banana grove there now. I like bananas. Bananas are good.

Mr. Lloyd (Damian Samuels): The police are on their way. I pay for the food on this table. The sweat on my brow, that food is. The sweat on my brow. Anything else you’d like? I’ve got a whole house here. Anything else you’d like to help yourself to?
Nancy (Florence Hoath): Yeah. I’d like some wire cutters, please. Something that can cut through barbed wire. Oh and a torch. Don’t look like that, Mr. Lloyd. I know you got plenty of tools in here. I been watching this house for ages. And I’d like another look ’round your kitchen cupboards. I was in an ‘urry the first time. I want to see if there’s anything I missed.
Mr. Lloyd: The food on this table—
Nancy: Is an awful lot of food, isn’t it, Mr. Lloyd? A lot more than on anyone else’s table. Half this street thinks your missus must be messing about with Mr. Haverstock, the butcher. But she’s not, is she? You are. Wire cutters. Torch. Food. And I’d like to use the bathroom before I leave, please. Oh look. There’s the sweat on your brow.

The Doctor: Can you sense it?
Captain Jack: Sense what?
The Doctor: Coming out of the walls. Can you feel it? Funny little human brains, how do you get around in those things?
Rose: When he’s stressed he likes to insult species.
The Doctor: Rose, I’m thinking.
Rose: Cuts himself shaving, does half an hour on life forms he’s cleverer than.
The Doctor: There are these children, living rough around the bomb sites. They come out during air raids, looking for food. Suppose they were there when this thing—whatever it was—landed.
Captain Jack: It was a med ship. It was harmless.
The Doctor: Yes, you keep saying. Harmless. Suppose one of them was affected. Altered.
Rose: Altered how?
The Child (Noah Johnson): I’m here!
The Doctor: It’s afraid. Terribly afraid and powerful. It doesn’t know it yet, but it will do. It’s got the power of a god and I just sent it to its room.
Rose: Doctor.
The Child: I’m here! Can’t you see me?
Rose: What’s that noise?
The Doctor: End of the tape. It ran out about 30 seconds ago.
The child: I’m here now! Can’t you see me?
The Doctor: I sent it to its room. This is its room.
The Child: Are you my mummy?

The Doctor: Come on, we’re not done yet. Assets! Assets!
Jack: Well, I’ve got a banana and in a pinch you could put up some shelves.

Rose: Okay, so he’s vanished into thin air. Why is it always the great looking ones who do that?
The Doctor: I’m making an effort not to be insulted.
Rose: I mean… men.
The Doctor: Okay, thanks. That really helped.

The Doctor: You just assume I don’t dance.
Rose: What? Are you telling me you do dance?
The Doctor: Nine hundred years old, me. I’ve been around a bit. I think you can assume at some point I’ve danced.
Rose: You?
The Doctor: Problem?
Rose: Doesn’t the universe implode or something if you dance?
The Doctor: Well I’ve got the moves but I wouldn’t want to boast.
Rose: You’ve got the moves? Show me your moves.
The Doctor: Rose, I’m trying to resonate concrete.
Rose: Jack will be back. He’ll get us out. The world doesn’t end because the Doctor dances.

The Doctor: I’ve travelled with a lot of people, but you’re setting new records for jeopardy-friendly.

The Doctor: We were talking about dancing.
Captain Jack: It didn’t look like talking.
Rose: Didn’t feel like dancing.

Rose: You used to be a Time Agent and now you are trying to con it?
Captain Jack: If it makes me sound any better, it’s not for the money.
Rose: It’s for what?
Captain Jack: Woke up one morning when I was still working for them, found they had stolen two years of my memories. I’d like ’em back.
Rose: They stole your memories?
Captain Jack: Two years of my life: no idea what I did. Your friend over there doesn’t trust me, and for all I know he is right not to.

The Doctor: Relax. He’s a 51st century guy. He’s just a bit more flexible when it comes to dancing.

The Doctor: Nancy, what age are you? Twenty? Twenty-one? Older than you look, yes?
Jack: Doctor, that bomb— we’ve got seconds.
Rose: You can teleport us out.
Jack: Not you guys. The Navcom’s back online. Gonna take too long to override the protocols.
The Doctor: So it’s Volcano Day. Do what you’ve got to do.
Rose: Jack!

The Doctor: He doesn’t understand. There’s not enough of him left.

The Doctor: Oh come on. Give me a day like this. Give me this one. Welcome back! Twenty years ’til pop music. You’re gonna love it!
Nancy: What happened?
The Doctor: The nanogenes recognized the superior information—the parent DNA. They didn’t change you because you changed them! Mother knows best!

Rose: Doctor, that bomb.
The Doctor: Taken care of it.
Rose: How?
The Doctor: Psychology.

Rose: What are you doing?
The Doctor: Software patch. Gonna email the upgrade. You want moves, Rose? I’ll give you moves. Everybody lives, Rose! Just this once! Everybody lives!

The Doctor: History says there was an explosion here. Who am I to argue with history?
Rose: Usually the first in line.

Rose: Look at you, beaming away like you’re Father Christmas!
The Doctor: Who says I’m not? Red bicycle when you were twelve.
Rose: What?
The Doctor: And everybody lives, Rose! Everybody lives! I need more days like this.
Rose: Doctor—
The Doctor: Go on, ask me anything. I’m on fire!
Rose: What about Jack? Why’d he say goodbye?

Jack: Okay computer, how long can we keep the bomb in stasis?
Computer: Stasis decaying at 90% cycle. Detonation in three minutes.
Jack: Can we jettison it?
Computer: Any attempt to jettison the device will precipitate detonation. 100% probability.
Jack: We could stick it in an escape pod.
Computer: There is no escape pod on board.
Jack: Okay, see the flaw in that. I’ll get in the escape pod.
Computer: There is no escape pod on board.
Jack: Did you check everywhere?
Computer: Affirmative.
Jack: Under the sink!
Computer: Affirmative.
Jack: Okay, out of 100, exactly how dead am I?
Computer: Termination of Captain Jack Harkness in under two minutes. 100% probability.
Jack: Lovely. Thanks. Good to know the numbers.
Computer: You’re welcome.
Jack: Okay then. Think we better initiate emergency protocol 417.
Computer: Affirmative.
Jack: Oo. A little too much vermouth. See if I come here again! {laughs}. Funny thing. Last time I was sentenced to death I ordered four hyper-vodkas for my breakfast. All a bit of a blur after that. Woke up in bed with both my executioners. Lovely couple. They stayed in touch. Can’t say that about most executioners. Anyway. Thanks for everything, computer. It’s been great.

Rose: Well hurry up then!

The Doctor: Close the door, will you? Your ship’s about to blow up. There’s gonna be a draft.

Rose: Welcome to the TARDIS.
Jack: Much bigger on the inside.
The Doctor: You better be.
Rose: I think what the Doctor is trying to say is, you may cut in.
The Doctor: Rose, I’ve just remembered.
Rose: What?
The Doctor: I can dance. I can dance!
Rose: Actually, Doctor, I thought Jack might like this dance.
The Doctor: I’m sure he would Rose. I’m absolutely certain. But who with?