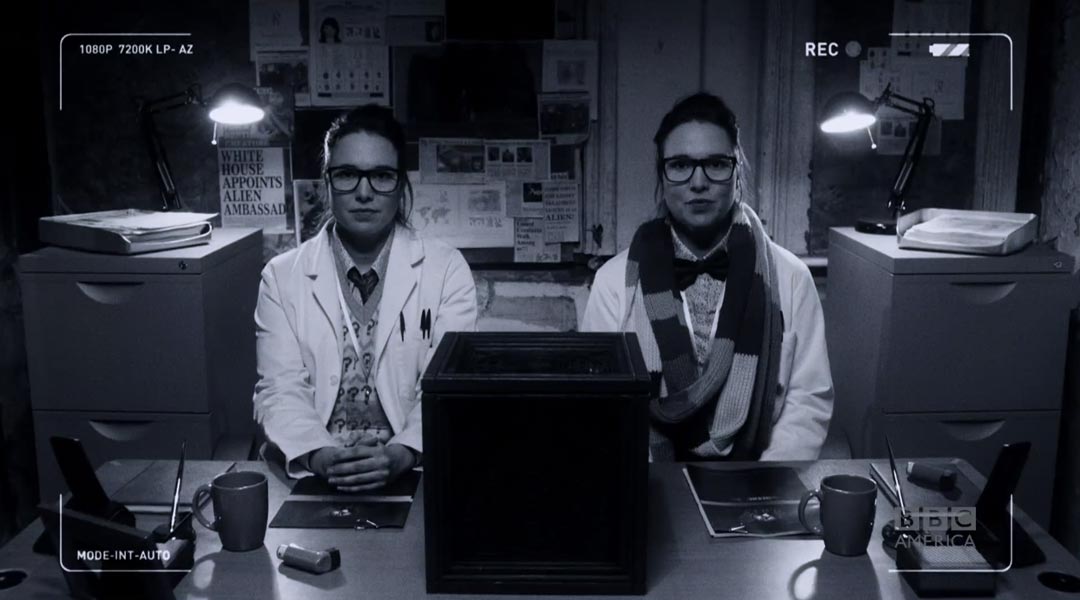 Osgood (Ingrid Oliver): Hello.
Osgood: Do you want to—?
Osgood: No, you can if you want to.
Both: Should we do it together?

Both Osgoods: Operation Double. The Zygon Peace Treaty.
Osgood: I’m Osgood.
Osgood: I’m also Osgood.
Osgood: Remember that. It’ll be important later.
Osgood: Operation Double is a covert operation—outside of normal UNIT strictures—to resettle and rehouse an alien race, in secrecy, on planet Earth.
Osgood: With UNIT’s help, 20 million Zygons have been allowed to take human form, been dispersed around the world, and are now living amongst us.
Osgood: We’re making this in case something goes wrong. In case UNIT is infiltrated. In case something occurs to unmask the Zygons.
Osgood: Or in case one or both of us dies.

Osgood: The Zygons are a peaceful race.
Osgood: Their shape-changing abilities should not be considered a weapon.
Osgood: It’s a survival mechanism.
Osgood: They embed themselves in other cultures, live out their lives in their new bodies, in peace and harmony. Mainly.
Osgood: Any race is capable of the best and the worst.
Osgood: Every race is peaceful and warlike.
Osgood: Good and evil.
Osgood: My race is no exception.
Osgood: And neither is mine.
Osgood: If one Zygon goes rogue—
Osgood: Or one human—
Osgood: —then the ceasefire will break.
Osgood: That’s why the Doctor left us this.
Osgood: He called it the Osgood Box.
Osgood: If you’ve been paying attention, you’ll be able to guess why.
Osgood: This is the last resort.
Osgood: The final sanction.
Osgood: Pray this box is never needed.
Osgood: Because if it is, that means the ceasefire is breaking.
Osgood: And with 20 million shape-changing Zygons dispersed around the world…
Osgood: That is the nightmare scenario.

The Doctor: Hello, it’s Doctor Disco. I’m in the 21st century. Don’t know what month. I’m staking out some of the most dangerous creatures imaginable. Operating under deep cover. Trying not to attract suspicion. Give me a call, Clara. Nightmare Scenario. I’m worried.

The Doctor: Okay, hey. Monster, hi. Cinderella. Down off the monkey bars. Listen to me, we’ve got to talk.

Kate Lethbridge-Stewart (Jemma Redgrave): Get into her files. We have to assume they’ve been compromised.
Jac (Jaye Griffiths): Um. Too late. The encryption system’s already been hacked. And they’ve sent through another video {Truth or Consequences appears on the screen}

The Doctor: Look, I’d admire you, okay? I think you’re ingenious. Pretending to be a couple of seven-year-olds. It’s a splendid way to conceal your bloodiness. But let’s not pretend. You are very blobbby. In face you two are the big blobs. And you are not betraying the ceasefire.

The Doctor: Listen. There are other factions. I know there are other blobby factions that you don’t control. They’re planning something. And if we don’t get together and stop it, it will be the end of this. Of all of you.
Claudette (Cleopatra Dickens): This is our jurisdiction, Doctor. These are our creatures. We are close to finding them.
Jemima (Sasha Dickens): They are our children and we will deal with them.
The Doctor: Your kids are out of control. I’m taking this out of your hands.

Kate: This is where the Zygon High Command had their secret base.
Clara: A junior school?
Kate: Terms of the settlement, Operation Double, were these: 20 million Zygons—the entire hatchery—were allowed to be born and to stay on Earth. They were permitted to permanently take the form of the nearest available human beings.
Jac: In this case a large percentage of the population of the UK.

The Doctor: What about the two little girl commanders? Weren’t they helping you?
Kate: They’ve been almost impossible to deal with since Osgood left. Secretive, uncommunicative. We’ve known there’s something going on. Some radicalization. Some revolution in the younger brood. They said they had it under control.

The Doctor: If this has been compromised, Zygons are wide open. They’ve started to panic. Started to worry.
Clara: Doctor. Do you want to be alone with this thing?
The Doctor: It’s a command computer. You operate it by titivating the fronds.
Clara: Are you enjoying that?
The Doctor: I snogged a Zygon once. Old habits. Still got the old magic.

Clara: So Osgood’s been kidnapped, right? I thought Osgood was dead.
Kate: There’ve always been two of her ever since the ceasefire. We never knew which one was real.
The Doctor: Both of them.
Kate: Okay. Which one was Zygon.
The Doctor: Both of them. They would have maintained a live link. They were both Zygon and human at the same time. They not only ministered the peace, they were the peace.

Zygon: We have been betrayed. We were sold. Our rights were violated. We demand the right to be ourselves. Normalize! Normalize! {they kill Claudette and Jemima} We are now the Zygon High Command. All traitors will die. Truth or consequences.

The Doctor: So. We have a Zygon revolution on our hands. We need to open negotiations.
Kate: I’m not negotiating with them. As far as they’re concerned, everyone’s a traitor.

Jac: Truth or Consequences. What exactly does that mean?
Kate: It’s just the usual kind of nonsense these idiots call themselves.
Clara: It’s in New Mexico.
Kate: What?
Clara: It’s a town in New Mexico. Truth or Consequences. They renamed it after a TV show for a bet or something. It’s a Trivial Pursuit question. I used to memorize Trivial Pursuit questions so I could… win.

The Doctor: Okay, Kate Stewart. No bombs for you. Go to Truth or Consequences, see what you can find out. The Doctor will go to Turmezistan, negotiate peace, rescue Osgood, and prevent this war. ‘Cuz that what he does. Clara, Jac, you stay here. This is your country. Protect it from the scary monsters. And also from the Zygons.

The Doctor: Oh, um, do you still have the Presidential aircraft?
Clara: I thought you didn’t like being President of the World.
The Doctor: No, but I like poncing about in the big plane.

Clara: Have you got any snazzy weapons?
Kate: There was an attempted Zygon invasion before. In the 70s, 80s. One of our staff was a naval surgeon who worked at Porton Down on captured Zygons. Developed Z-67. It’s a nerve gas.  Unravels their DNA. Basically turns them inside out.
Clara: Where do you keep it?
Kate: We don’t. It was taken. The formula. The lot.
Clara: Who took it?
Kate: Somebody with a TARDIS.

The Doctor: At ease. I’m the President of the world. I’m here to rescue people and generally establish happiness all over the place.  The Doctor. Doctor Funkenstein.
Walsh (Rebecca Front): Yes. We know who you are.

Norlander (Gretchen Egolf): You one of them?
Kate: I’m a friend, I’ve come to help.
Norlander: Alone? Have you come to help alone?
Kate: What happened here?
Norlander: You must have brought backup? Where’s your backup? Tell me!
Kate: First tell me why I need it.

Walsh: We should have that gas. We should be able to rip them inside out.
The Doctor: Colonel, take it easy. They’re trying to unsettle you. They’re trying to make you paranoid and panicked.
Walsh: Any living thing in this world, including my family and friends, could turn into a Zygon and kill me any second now. It’s not paranoia when it’s real.

Jac: There is something very wrong happening underneath London.

Norlander: The Brits came two years ago. We didn’t want ’em, they just turned up. No jobs. Nowhere to live. No money. And they were… they were odd. They started getting into fights. A could of ’em got killed.
Kate looking through files: More than a couple. What happened here?
Norlander: Well after the murders they started banding together. And then one day, one of them changed.
Kate: Changed?
Norlander: One of ’em was walking down West Main, and suddenly… it turned into a… a reptile.

Walsh: You know what they’re capable of. Do not fall victim to it.

Osgood: What do the Zygons want?
The Doctor: They’re training, practicing new skills. Doctor, what are you doing here?
Osgood: Rescuing you. In quite a dashing way I might add.

Jac: Doesn’t it feel sometimes that things are coming to an end. Everything’s just going nuts.
Clara: You’re middle-aged. That’s what it is. no offense. Everybody middle-aged always things the world’s about to come to an end. It never does.

The Doctor: Which one are you? Human or Zygon?
Osgood: I don’t answer that question.
The Doctor: Why not?
Osgood: Because there isn’t a question to answer. I don’t accept it. My sister and I were the living embodiment of the peace we made. I will give all the lives that I have to protect it. You want to know who I am, Doctor? I am the peace. I am human and Zygon.
The Doctor: Like a hybrid.
Osgood: A hybrid, if you like.
The Doctor: Well I’m proud to know you, Osgood. And I promise that I won’t tell anyone that you’re a human. Zygons need to keep the human original alive to refresh the body print. If you were a Zygon, you would have changed back within days of your sister’s death.
Osgood: Those were the old rules. Before Zygons could pluck loved ones from your memory and wear their faces. Zygons only need to keep the original alive if they need more information from them. If the interrogation is over, then the original can die.

Clara: I think you might be right.
Jac: About what?
Clara: The end of the world.

The Doctor: You want something. What is it?
Zygon: You are the President of the world.
The Doctor: I suppose so.
Zygon: We want the world.

Jac: But I don’t see how these are duplicates. That’s not how Zygons work. They don’t grow duplicates. They kidnap the original. So these… these are the humans. Retreat. Retreat! This is a trap! This is an ambush!

Zygon: The invasion’s already taken place. Bit by bit, over the last year. We’ve won the first battle. And now we are going to begin the war.

Zygon: Answer it. Say goodbye. This plane will never land.

Bonnie: I’m sorry, but Clara is dead. Kate Stewart is dead. The UNIT troops are all dead. “Truth or Consequences”.