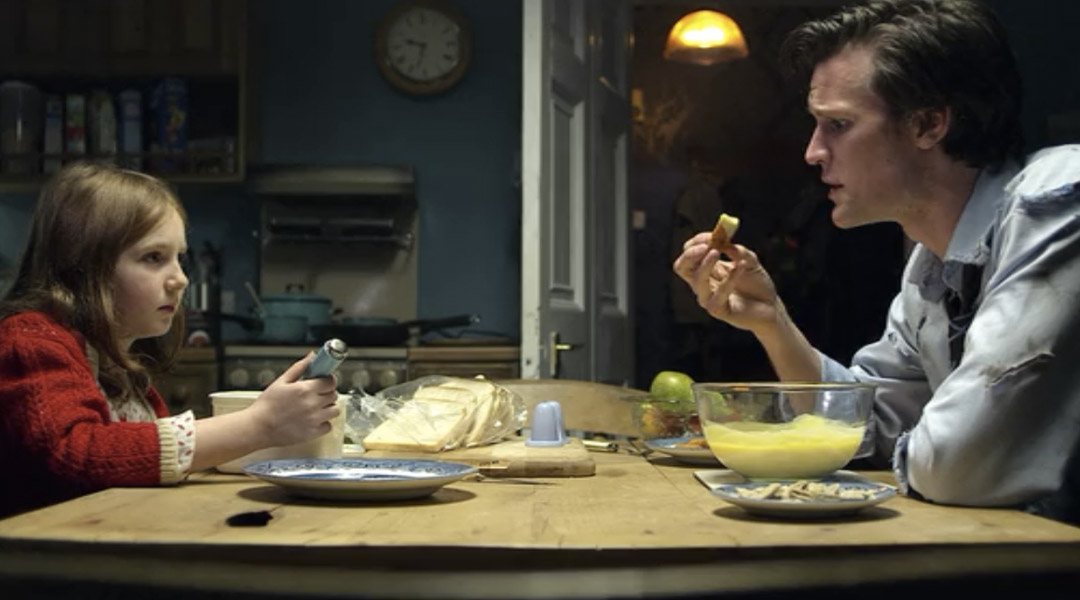 Amelia Pond (Caitlin Blackwood): Dear Santa, Thank you for the dolls and pencils and the fish. It’s Easter now, so I hope I didn’t wake you. But honest, it is an emergency. There’s a crack in my wall. Aunt Sharon says it’s just an ordinary crack but I know it’s not. Because at night there’s voices. So please, please could you send someone to fix it. Or a policeman… or… hears the TARDIS crashing in the backyard. Back in a moment. Looks out the window. Thank you Santa.

The Doctor: That’s disgusting. What is that?
Amelia: An apple.
The Doctor: Apple’s rubbish. I hate apples.
Amelia: You said you liked them.
The Doctor: No no no. I like yogurt. Yogurt’s my favorite. Gimme yogurt.

The Doctor: I hate yogurt. It’s just stuff with bits in.
Amelia: You said it was your favorite.
The Doctor: New mouth, new rules! It’s like eating after cleaning your teeth. Everything tastes—
Amelia: What is it? What’s wrong with you?
The Doctor: Wrong with me? It’s not my fault. Why can’t you give any decent food. You’re Scottish. Fry something.

Amelia: Got some carrots.
The Doctor: Carrots. Are you insane? No, wait. Hang on, I know what I need. I need… fish fingers. And custard.

The Doctor: You’ve had some cowboys in here. Not actual cowboys. Though that can happen.

The Doctor: Wibbly-wobbly, timey-wimey. Do you know what the crack is?
Amelia: What?
The Doctor: It’s a crack. But I’ll tell you something funny. If you knock this wall down the crack would stay put ’cause the crack isn’t in the wall.
Amelia: Where is it then?
The Doctor: Everywhere. And everything. It’s a split in the skin of the world. Two parts of space and time that should never have touched. Pressed together. Right here in the wall of your bedroom.

The Doctor: Give me five minutes. I’ll be right back.
Amelia: People always say that.
The Doctor: Am I people? Do I even look like people. Trust me. I’m the Doctor.

Dr. Ramsden (Nina Wadia): So. They all called out at once. That’s what you’re saying. All of them. All the coma patients. You do understand that these people are all comatose, don’t you? They can’t speak.
Rory Williams: Yes, Dr. Ramstead.
Dr. Ramsden: Then why are you wasting my time?
Rory: Because they called for you.

Amy: Oy! You. Sit still.
The Doctor: Cricket bat. I’m getting… cricket bat.
Amy: You were breaking and entering.
The Doctor trying to get up: Well that’s much better. Brand new me. Whack on the head— just what I needed.
Amy: Do you want to just shut up now. I’ve got back-up on the way.
The Doctor: Hang on, no wait—you’re a policewoman.
Amy: And you’re breaking and entering. See how this works?
The Doctor: But what are you doing here? Where’s Amelia?
Amy: Amelia Pond?
The Doctor: Yeah. Amelia. Little Scottish girl. Where is she? I promised her five minutes, but the engines were phasing. I suppose I must have gone a bit far. Has something happened to her?
Amy: Amelia Pond hasn’t lived here in a long time.
The Doctor: How long?
Amy: Six months.
The Doctor: No! No! No no no. I can’t be six months late. I said five minutes. I promised. What happened to her? What happened to Amelia Pond?

The Doctor: Why does no one ever listen to me? Do I just have a face that nobody listens to?! …Again.

The Doctor to his screwdriver: Oh, what has the bad alien done to you?
Amy: Will that door hold it?
The Doctor: Oh yeah! Yeah, ‘course. It’s an inter-dimensional, multiform from outer space. They’re all terrified of wood.

The Doctor: Run! Just go. Your backup’s coming. I’ll be fine.
Amy: There is no back up.
The Doctor: I heard you on the radio. You called for back up.
Amy: I was pretending. It’s a pretend radio.
The Doctor: But you’re a policewoman.
Amy: I’m a kiss-o-gram!

The Doctor: Hello. Sorry to burst in. We’re doing a special on television faults in this area. {looks at Amy} Also crimes.

The Doctor: You were a little girl five minutes ago!
Amy: You’re worse than my aunt.
The Doctor: I’m the Doctor. I’m worse than everybody’s aunt. And that is not how I’m introducing myself.

The Doctor: Oh and here they come. The human race. See. The end comes as it was always going to: down a video phone.

Amy: You told me you had a time machine.
The Doctor: And you believed me.
Amy: Then I grew up.
The Doctor: Oh, god. You never want to do that.

Sir Patrick Moore: This is a secure phone! What are you doing here?
The Doctor: Yeah, I know. You should switch me off. But before you do, watch this. Fermat’s Theorem. The proof. And I mean the real one. Never been seen before. Poor old Fermat got killed in a duel before he could write it down. My fault. I slept in. Oh! And here’s an oldie but a goodie: why electrons have mass. And a personal favorite of mine. Faster than light travel with two diagrams and a joke.

Sir, what are you doing?
The Doctor: I am writing a computer virus. Very clever, super fast, and a tiny bit alive. But don’t let on!

The Doctor: You came to this world by opening a crack in space and time. Do it again. Just leave.
Prisoner Zero (Olivia Colman): I did not open the crack.
The Doctor: Somebody did.
Prisoner Zero: The cracks in the skin of the Universe. Don’t you know where they came from? You don’t, do you? The Doctor in the TARDIS doesn’t know. Doesn’t know doesn’t know! The Universe is cracked. The Pandorica will open, silence will fall.

The Doctor: And we’re off! Look at that. Look at that! Yeah, I know. Just a clock. Whatever.

The Doctor: Oh! And I think they just found me.

The Doctor: And the final score is no TARDIS, no screwdriver, two minutes to spare. Who da man?! Silence. I’m never saying that again. Fine.

The Doctor: Well that’s rubbish. Who’s that supposed to be?
Rory: It’s you.
The Doctor: Me? Is that what I look like?
Rory: You don’t know?
The Doctor: Busy day.

Rory: What are you doing?
The Doctor: Tracking the signal back—sorry, in advance.
Rory: About what?
The Doctor: The bill. Oy! I didn’t say you could go. Article 57 of the Shadow Proclamation. This is a fully-established level five planet. And you were going to burn it. What? Did you think no one was watching. You lot. Back here. Now. Okay. Now I’ve done it.
Rory: Did he just bring them back? Did he just save the world from aliens and then bring all the aliens back again?

Atraxi: You are not of this world.
The Doctor: No, but I’ve put a lot of work into it.

The Doctor to the Atraxi: Hello. I’m the Doctor. Basically: run.

The Doctor to the TARDIS: Okay. What have you got for me this time? Look at you. Oh you sexy thing. Look at you!

Amy: It’s you. You came back.
The Doctor: ‘Course I came back. I always come back. Something wrong with that?
Amy: You kept the clothes.
The Doctor: Well I just saved the world. The whole planet for about the millionth time. No charge. Yeah, shoot me. I kept the clothes.
Amy: Including the bow tie.
The Doctor: Yeah, it’s cool. Bow ties are cool.
Amy: Are you from another planet?
The Doctor: Yeah.
Amy: ‘Kay.
The Doctor: So what do you think?
Amy: What?
The Doctor: Other planets. Wanna check some out?
Amy: What does that mean?
The Doctor: It means, well. It means, come with me.
Amy: Where?
The Doctor: Wherever you like.
Amy: All that stuff that happened—the hospital, the spaceships, Prisoner Zero—
The Doctor: Oh, don’t worry. That’s just the beginning. There’s loads more.
Amy: Yeah but those things. Those amazing things—all that stuff… That was two years ago!
The Doctor: Ooo! … Oops. So that’s—
Amy: Fourteen years!
The Doctor: Fourteen years since fish custard. Amy Pond, the Girl Who Waited. You’ve waited long enough.
Amy: When I was a kid you said there was a library. And a swimming pool. And the swimming pool was in the library.
The Doctor: Yeah. Not sure where it’s got to now. It’ll turn up. So: coming?
Amy: No.
The Doctor: You wanted to come fourteen years ago.
Amy: I grew up.
The Doctor: Don’t worry. I’ll soon fix that. {snaps his fingers and the TARDIS opens.}

The Doctor: So. All of time and space. Everything that ever happened or ever will. Where do you want to start?
Amy: You are so sure that I am coming.
The Doctor: Yeah. I am.
Amy: Why?
The Doctor: ‘Cause you’re the Scottish girl in an English village. And I know how that feels.
Amy: Oh do you?
The Doctor: All these years, living here most of your life and you’ve still got that accent. Yeah, you’re coming.
Amy: Can you get me back for tomorrow morning?
The Doctor: It’s a time machine. I can get you back for five minutes ago. Why, what’s tomorrow?
Amy: Nothing. Nothing. Just, you know, stuff.
The Doctor: Alright then. Back in time for stuff.

The Doctor: Oh! A new one. Lovely. {to the TARDIS:} Thanks dear.