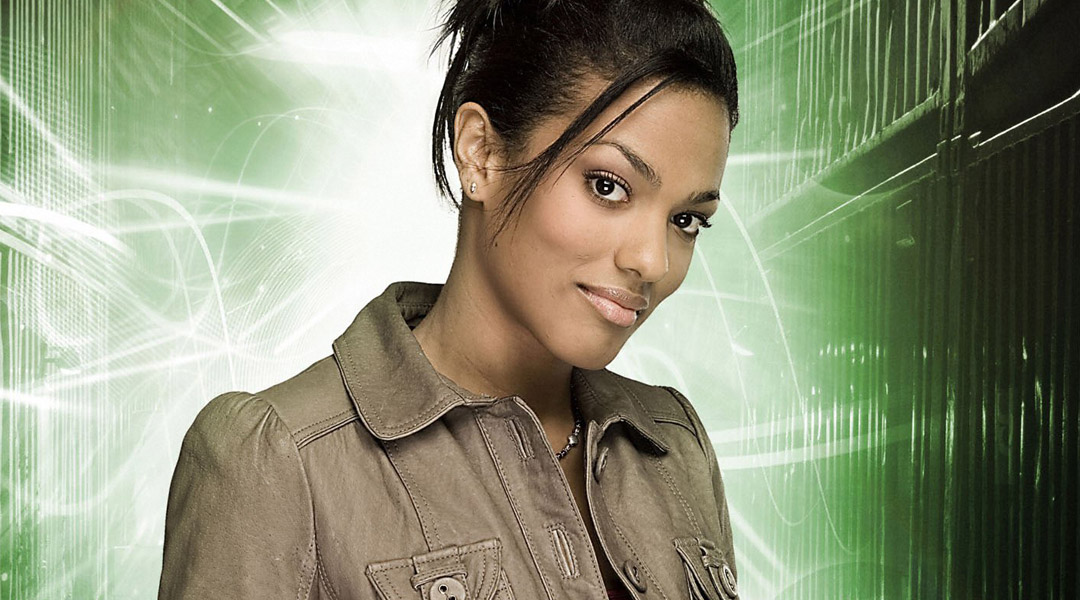 The Doctor: Hello?
Martha: Doctor? It’s Martha. And I’m bringing you back to Earth.

The Doctor: Martha Jones.
Martha: Doctor.
The Doctor: You haven’t changed a bit.
Martha: Neither have you!

The Doctor: Martha, Donna. Donna, Martha. Please, don’t fight. I can’t bear fighting.
Donna: You wish. I’ve heard all about you. He talks about you all the time.
Martha: I dread to think.
Donna: No no, he says nice things. Good things. Nice things. Really good things.
Martha: Oh my god, he’s told you everything.
Donna: Didn’t take long to get over it, though. Who’s the lucky man?
The Doctor: What man? Lucky what?
Donna: She’s engaged, you prawn.

Martha: It’s all right for you. You can just come and go. But some of us have got to stay behind. So I’ve got to work from the inside. And by staying inside maybe I stand a chance of making them better.
The Doctor: Yeah? That’s more like Martha Jones.

Martha: I can see why he likes you. You are good.
Donna: Super Temp.

Martha: Do they know where you are? Your family? I mean that you’re travelling with the Doctor.
Donna: Not really. Although, my Wilfred sort of waved us off. I didn’t have time to explain.
Martha: You just left him behind?
Donna: Yeah.
Martha: I didn’t tell my family. Kept it all so secret. It almost destroyed them.
Donna: In what way?
Martha: They ended up in prison. They were tortured. My mum, my dad, my sisiter. It wasn’t the Doctor’s fault but you need to be careful. ‘Cause you know the Doctor—he’s wonderful, he’s brilliant, but he’s like fire. Stand too close and people get burned.

The Doctor: I’m stuck. On Earth, like… Like an ordinary person. Like a human. How rubbish is that? Sorry, no offense but come on!
Martha: So what do we do?
The Doctor: Well. I mean it’s shielded. They could never detect it. pauses
Martha: What?
The Doctor: I was just wondering, have you phoned your family and Tom?
Martha: No. What for?
The Doctor: The gas. Tell them to stay inside.
Martha: Of course… I will, yeah. But what about Donna? I mean, where’s she?
The Doctor: Oh… she’s gone home. She’s not like you. She’s not a soldier. Right! So. Avanti!

The Doctor: Missiles wouldn’t even dent that ship. So why are the Sontarans so keen to stop you. Any ideas?
Martha: How should I know?

Martha: You’re not going without me.
The Doctor: Wouldn’t dream of it.

The Doctor: Am I supposed to be impressed?
Martha: Wish you carried a gun now?
The Doctor: Not at all.
Martha: I’ve been stopping the nuclear launch all this time.
The Doctor: Doing exactly what I wanted. I needed to stop the missiles just as much as the Sontarans. I’m not having Earth start an interstellar war. You’re a triple agent!
Martha: When did you know?
The Doctor: About you? Oh, right from the start. Reduced iris contraction, slight thinning of the hair follicles on the left temple. And frankly you smell. You might as well have worn a t-shirt saying “clone”. Although, maybe not in front of Captain Jack. You remember him, don’t you? ‘Cause you’ve got all her memories. That’s why the Sontarans had to protect her. To keep you inside UNIT. Martha Jones is keeping you alive.

Donna: You know that coat… sort of works.
Martha: I feel like a kid in my dad’s clothes.
Donna: Oh well, if you’re calling him “dad” you’re definitely getting over him.

Martha: What are you doing?
Luke: Something clever.

The Doctor: Why did the TARDIS bring us here?
Martha: Oh, I love this bit.
Donna: I thought you wanted to go home.
Martha: I know. But, all the same. It’s that feeling you get.
Donna: Like you swallowed a hamster.

Martha: Half-fish, half-human. How am I supposed to know? Is that a shoulder? Feels like a shoulder.

Martha: Now then. I’m Dr. Martha Jones. Who the hell are you?

Martha: But I didn’t do anything. I think I just started a war.

Martha: Is it me or can you smell flowers?
The Doctor: Yes. Bouganvillia. I say we follow our nose.

The Doctor: Two hearts. Two hearts like me. If we wait, we just wait.
Martha: There’s no sign, Doctor. There’s no regeneration. She’s like you, but…. maybe not enough.
The Doctor: No. Too much. That’s the truth of it. She was too much like me.

Jack: Martha, get out of there!
Martha: I can’t Jack! I’ve got a job to do!
Jack: They’re targeting military bases and you’re next on the list.

General Sanchez: Put it on. Fast as you can!
Jack: Martha, I’m telling you, don’t use Project Indigo. It’s not safe!
General Sanchez: You take your orders from UNIT, Dr. Jones. Not from Torchwood!
Martha: But why me?
General Sanchez: You are our only hope of finding The Doctor. But failing that, if no help is coming, then with the power invested in me by the Unified Intelligence Task Force, I authorize you to take this. The Osterhagen Key.
Martha: I can’t take that, sir!
General Sanchez: You know what to do. For the sake of the human race. Dr. Jones, good luck.

Harriet Jones: Good. Now let’s see if we can talk to each other. The fourth contact seems to be having some trouble getting through.
Rose: That’s me! Harriet, that’s me!
Harriet Jones: I’ll just boost the signal.
Martha: Hello?
Jack: Ha ha! Martha Jones!
Rose: Who’s she? I wanna get through.
Jack: Martha. Where are you?
Martha: I guess Project Indigo was more clever than we thought. One second I was in Manhattan, next second— maybe Indigo tapped into my mind because I ended up in the one place I wanted to be.
Francine: You came home, at the end of the world you came back to me.
But then all of the sudden it’s like, the laptop turned itself on.
Harriet Jones: It did. That was me. Harriet Jones, former Prime Minister.
Martha: Yes, I know who you are.

The Doctor: What’s an Osterhagen Key?!
Martha: There’s a chain of twenty-five nuclear warheads. Placed in strategic points beneath the Earth’s crust.
If I use the key, they detonate and the Earth gets ripped apart.
The Doctor: What?! Who invented that— well, someone called Osterhagen, I suppose. Martha, are you insane?!

The Doctor to Jack: I told you! No teleport. And Martha, get rid of that Osterhagen thing. Eh? Save the world one more time.
Martha: Consider it done.