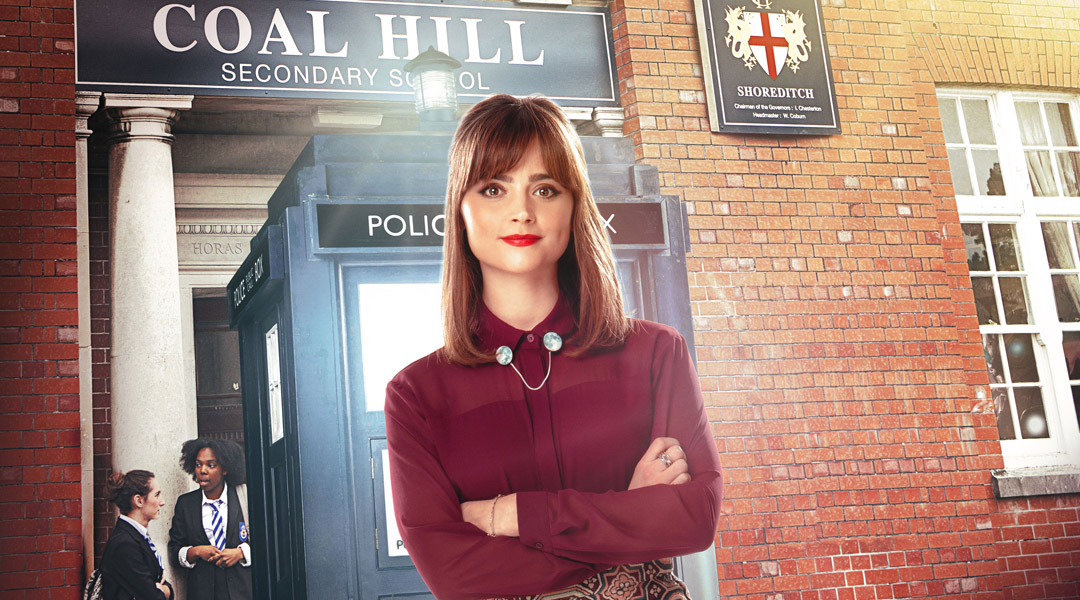 Jenny Flint: I don’t understand. Who is he? Where’s the Doctor?
Clara: Right here. That’s him. That’s the Doctor.
Madame Vastra: Well then. Here we go again.

Clara: How do we change him back?
Madame Vastra: Jenny. I will be in my chamber. Would you be kind enough to fetch my veil?
Jenny: Why? Are we expecting strangers?
Madame Vastra: It would seem there’s already one here.
Clara: What have I done wrong?

Madame Vastra: I wear a veil as he wore a face.
Clara: For what reason?
Madame Vastra: The oldest reason there is for anything: to be accepted.

Clara: Marcus Aurelius, Roman Emperor. Last one of the five good and stoic philosopher.
Madame Vastra: Superlative bass guitarist. The Doctor really knows how to put a band together.
Clara: And the only pin-up I ever had on my wall when I was fifteen. The only one I ever had. I am not sure who you think you’re talking to right now, Madame Vastra, but I have never had the slightest interest in pretty young men. And for the record if there was anybody who could flirt with a mountain range she’s probably standing in front of you right now! Just because my pretty face has turned your head do not assume I am so easily distracted.

Madame Vastra: The Doctor needs us. You more than anyone. He is lost in the world of himself and you must bring him home.
Clara: When did you stop wearing your veil?
Madame Vastra: When you stopped seeing it.

Madame Vastra: Clara! Excellent. Pop your clothes on that chair then.
Clara: Look.
Madame Vastra: Advertisements. Yes. So many. It’s a distressing modern trend.
Clara: No. Look. {Impossible Girl}
Madame Vastra: The game is afoot. We’re going to need a lot of tea.

Madame Vastra: Perhaps you’re supposed to prove that you still know him. Think what that means for a man that barely knows himself.
Clara: That doesn’t make sense. He doesn’t do puzzles. He isn’t complicated. He really doesn’t have the attention span.

Clara: So what kind of person would put a cryptic note in a newspaper advert?
The Doctor: Well I would like to say—
Clara: Oh go on, do say.
The Doctor: Well I would say that that person would be an egomaniac needy game player sort of person.
Clara: Thank you. Hm. Well at least that hasn’t changed.
The Doctor: I don’t suppose it ever will.
Clara: No, I don’t suppose it will either.
The Doctor: Clara, honestly. I don’t want you to change. It was no bother, really. I saw your advert, figured it out. Happy to play your game.
Clara: No. I didn’t place the ad, you placed the ad.

The Doctor: There’s something extremely wrong with everybody else sitting in this room.
Clara: Basically don’t you always think that?

Clara: Anything we can do?
The Doctor: How long can you hold your breath?

The Doctor: You’ve got to admire their efficiency.
Clara: Is it okay if I don’t?

The Doctor: Hello. Hello! Are you the manager? I demand to speak to the manager!
Clara: It’s not a real restaurant, is it?
The Doctor: Well. It’s more a sort of a automated open collection station for the unwary diner. Serving tart without the pies.
Clara: So where are we now?
The Doctor: Factually, an ancient spaceship probably here for centuries. Functionally, a larder.

Clara about the screwdriver: You should make that thing voice-activated. {nothing} Oh for God’s sake it is, isn’t it.
The Doctor: I don’t want to talk about it.

Clara: Is it awake?
The Doctor: It’s waking up. I think.

The Doctor: Sorry, too slow. There’s no point in him catching us both.
Clara: Well give me the screwdriver.
The Doctor: I might need it. {he leaves her}

Clara: Never start with your final sanction. You’ve got nowhere to go but backwards.

Clara: How long have you been rebuilding yourselves? Look at the state of you. Is there any real you left? What’s the point?
Half-Face Man: We will reach the Promised Land.
Clara: The Promised Land, what’s that?

Half-Face Man: Where is the other one?
Clara: I don’t know. But I know where he will be. Where he will always be. If the Doctor is still the Doctor, he will have my back.

Half-Face Man: Why are you here?
The Doctor: Why did you invite us? The message in the paper, that was you wasn’t it? {nothing} Oh. I hate being wrong in public. Everybody forget that happened. Clara, say the word.
Clara: What word?
The Doctor: They’d never send you in here without a word.
Clara: I don’t want to say it.
The Doctor: I’ve guessed it already.
Both: Geronimo.

Madame Vastra: The establishment upstairs has been disabled with maximum prejudice and the authorities summoned.
Clara: Hang on, she called the police. We never do that. We should start.

Clara: Got a vacancy?
Madame Vastra: You would be very welcome to join our little household. But I have it on the highest authority that the Doctor will be returning for you very soon.
Clara: Who’s authority?
Madame Vastra: The person who knows him best throughout the universe.
Clara: And who is that?
Madame Vastra: Miss Clara Oswald.

Clara: I don’t think I know who the Doctor is anymore.
Madame Vastra: It would seem my dear you’re very wrong about that. Clara! Give him hell. He’ll always need it.

Clara: You’ve redecorated.
The Doctor: Yes.
Clara: I don’t like it.
The Doctor: I’m not entirely convinced myself. I think there should be more round things on the walls. I used to have a lot of round things. I wonder where I put them.

The Doctor: Clara, I’m not your boyfriend.
Clara: I never thought you were.
The Doctor: I never said it was your mistake.

Clara: I’m sorry. I’m so so sorry. But I don’t think I know who you are anymore.

The Doctor: Better get that. Might be your boyfriend.
Clara: Shut up. I don’t have a boyfriend.

The Doctor: Well?
Clara: Well what?
The Doctor: He asked you a question. Will you help me?
Clara: You shouldn’t have been listening.
The Doctor: I wasn’t, I didn’t need to. That was me talking. You can’t see me, can you? You look at me and you can’t see. Do you have any idea what that’s like? I’m not on the phone, I’m right here. Standing in front of you. Please just… just see me.

Clara: Thank you.
The Doctor: For what?
Clara: Phoning. {she hugs him}
The Doctor: I don’t think that I’m a hugging person now.
Clara: I’m not sure you get a vote.
The Doctor: Whatever you say.
Clara: This isn’t my home by the way.

Clara: Where are we?
The Doctor: Glasgow, I think. Ah. You’ll fit right in. Scottish.

The Doctor: I don’t have any money.
Clara: You’ll fetch it then.
The Doctor: I’m not sure that I’m the fetching sort.
Clara: Yeah. Still not sure you get a vote.