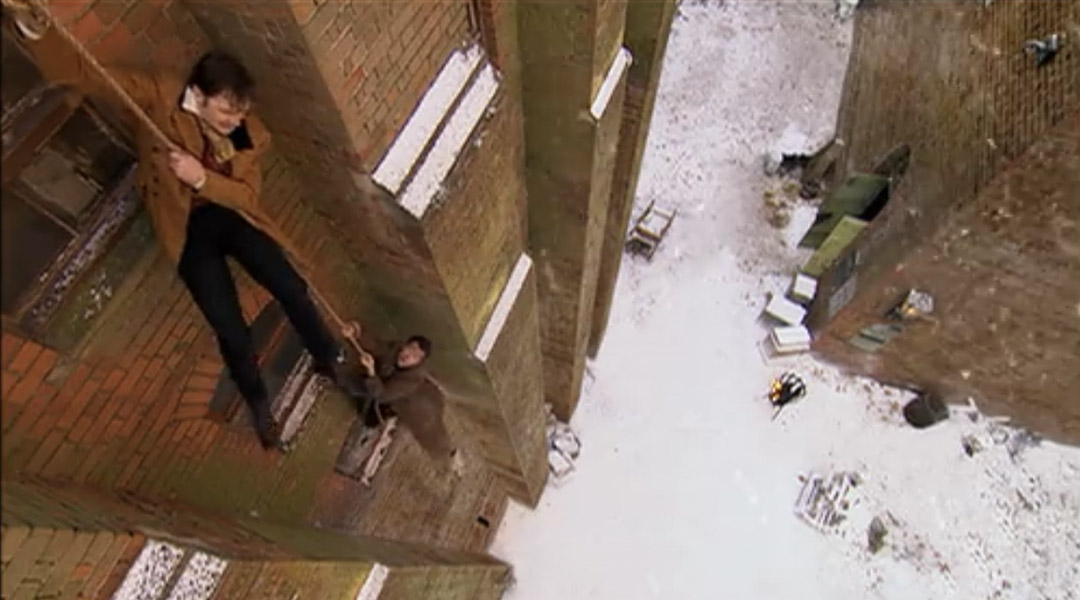 The “New” Doctor: It’s funny. I seem to be telling you everything. As though you engendered some sort of trust. You seem familiar, Mr. Smith. Like I know your face. But how?
The Doctor: I wonder. I can’t help noticing you’re wearing a fob watch.
The “New” Doctor: Is that important?
The Doctor: Legend has it that the
memories of a Time Lord can be contained within a watch. D’you mind? It’s said… that if it’s opened… the inner workings pop out Oh. Maybe not.
The “New” Doctor: That’s more for decoration.

The “New” Doctor: Who are you?
The Doctor: A friend. I swear.
The “New” Doctor: Then I beg you, John. Help me.
The Doctor: Ah. Two words I never refuse. But that’s not a conversation for a dead man’s house. It’ll make more sense if we go back to the TARDIS. Your… TARDIS. I just need to do a little final check. Won’t take a tick. Because there’s one more thing I cannot figure. If this room’s got infostamps then maybe, just maybe, it’s got something that needs infostamping. opens a door to find a Cyberman. Okay. I think we should run.

Vicar (Jason Morell): Madame. I must protest!
Miss Hartigan: Whatever for?
Vicar: A lady at the graveside is
debatable enough but— your apparel.
Miss Hartigan: Is it too exciting?
Mr. Cole (Michael Bertenshaw): You’re disgracing the ceremony! Just like a harlot.
Miss Hartigan: Oh, and you should know, Mr. Cole.
Mr. Cole: How do you know my name?
Miss Hartigan: You walk past me so many times. All you good men of charity. Never once asking my name.
Mr. Scoones (Edmund Kente): It’s Miss Hartigan, isn’t it?
Miss Hartigan: Oh you noticed. I saw you looking. You cheeky boy.

Miss Hartigan: “Man that is borne of woman hath but a short time to live.” Although I’ve got some friends who might disagree with that. would you like to meet them? Hark! I can hear them now.

The “New” Doctor: What manner of men are they?
The Doctor: Cybermen.

Mr. Scoones: You monstrous witch!
Miss Hartigan: Merry Christmas to you too.
Mr. Scoones: But why are we spared? What do you need us for?
Miss Hartigan: Your children. It’s funny, now I think of it, but in all these years not one of you has asked my first name. It’s Mercy.

Rosita: Doctor! I thought you were dead.
The “New” Doctor: Now then, Rosita. A little decorum.
Rosita: You’ve been gone for so long. He’s always doing this. Leaving me behind.
The “New” Doctor: What about the TARDIS?
Rosita: Oh, she’s ready. C’mon.
The Doctor: Oh, I’m looking forward to this.

The “New” Doctor: Are you whistling again?
The Doctor putting away the sonic screwdriver: Yes. Yes I am. Yeah.

The “New” Doctor: There she is! My transport through time and space. My TARDIS.
The Doctor: You’ve got a… balloon.
The “New” Doctor: TARDIS. T-A-R-D-I-S. It stands for Tethered Aerial Release Developed in Style. D’you see?
The Doctor: Well I do now. I like it. Good…. TARDIS. Brilliant. Nice one. It’s inflated by gas, yeah?

The Doctor: The story begins with the Cybermen. A long time away—and not so far from here—the Cybermen were fought. And they were beaten. And they were sent into a howling wilderness called The Void. Locked inside forevermore. But then a greater battle rose up. So great that everything inside The Void perished. But as the walls of the world weakened, the last of the Cybermen must have fallen through the dimensions, back in time. To land here. And they found you.
The “New” Doctor: I fought them, I know that. But what happened?
The Doctor: At the same time another man came to London. Mr. Jackson Lake. Plenty of luggage. Money in his pocket. Maybe coming to town for the winter season. But he found the Cybermen too. And just like you—exactly like you—he took hold of an infostamp.
The “New” Doctor: But he’s dead. Jackson Lake is dead. The Cybermen murdered him.
The Doctor: You said no body was ever found. And you kept all his suitcases but you could never bring yourself to open them. I told you the answer was in the fob watch. Can I see? “J.L.” The watch is Jackson Lake’s. Jackson Lake is you, sir.
The “New” Doctor: But I’m The Doctor.
The Doctor: You became The Doctor. Because the infostamp you picked up was a book about one particular man. The Cybermen’s database. Stolen from the Daleks inside The Void, I’d say. But it’s everything you could want to know about The Doctor.
Jackson Lake: That’s you.
The Doctor: Time Lord. TARDIS. Enemy of the Cybermen. The one and the only. You see, the infostamp must have backfired. Streamed all that information about me inside your head.
Jackson Lake: I am nothing but a lie.
The Doctor: No no no no. Infostamps are just facts and figures. All that bravery—saving Rosita, defending Londontown. Hm? The invention—building a TARDIS. That’s all you.
Jackson Lake: And what else? Tell me what else.
The Doctor: There’s still something missing isn’t there?
Jackson Lake: I demand you tell me sir! Tell me what they took!
The Doctor: Sorry. Really I am so sorry. But that’s an awful lot of luggage for one man. ‘Cause an infostamp is plain technology. It’s not enough to make a man lose his mind. What you suffered is called a fugue. A fugue state. Where the mind just runs away ’cause it can’t bear to look back. You wanted to become someone else. Because Jackson Lake had lost so much.
Rosita: Midnight. Christmas Day.
Jackson Lake: I remember. Oh my god. Caroline. They killed my wife.

Jackson Lake to Rosita: The Doctor needs help. I learned that much about him. There should be someone at his side. Now go. Go!

The Doctor: Mr. Cole, you seem to have something in your ear.

The Doctor running into a Cyberman: Woah! That’s cheating, sneaking up. Do you have your legs on silent?

Rosita: One last thing. turns and clocks Hartigan.
The Doctor approvingly: Can I say I completely disapprove!

The Doctor: Maybe you should go back—
Rosita: Don’t even try.

Miss Hartigan: As for you, Mr. Cole, Mr. Scoones, Mr. Fitch and Mr. Milligan. Your work is done.

Miss Hartigan: For the love of God, have you no pity?
Cyberman: Correct.

The Doctor: Oo. Hold on. Power fluctuation. That’s not gonna help.
Jackson Lake: What’s going on?
The Doctor: I don’t know. That’s weird. The software is rewriting itself. It’s changing.

The Doctor: Whoa! What the hell’s happening? It’s out of control!
Jackson Lake: It’s accelerating. At 96% 97%.
Rosita: When it reaches 100? What happens to the children?
The Doctor: They’re disposable. C’mon!

The Doctor to the children: There’s a hot pie for everyone if you leg it!

Miss Hartigan: Behold. I am risen. Witness me, mankind. A Cyberking of all.

Miss Hartigan/Cyberking: And I will stride. I will walk across this tiny world.

The Doctor: Jackson, you’ve got your son. You’ve got a reason to live.
Jackson Lake: And you haven’t? realizes he doesn’t God save you Doctor.

Jed (Neil McDermott): Ever flown one of these before?
The Doctor: Nope. Never!
Jed: Can I have my money now?
The Doctor: Oh get on with it!

Miss Hartigan/Cyberking: Excellent. The Doctor. Yet another man come to assert himself in the middle of the night.

Jackson Lake: Ladies and Gentlemen! I know that man— that Doctor on high! And I know that he has done this deed a thousand times. But not once, no sir, not once— not ever!—has he been thanked. But no more as I say to you on this Christmas morn, “Bravo, sir! Bravo!”

Jackson Lake: Tell me one thing. All those facts and figures I saw of the Doctor’s life, you were never alone. All those bright and shining companions. But not anymore?
The Doctor: No.
Jackson Lake: Might I ask why not?
The Doctor: They leave. Because they should. Or they find someone else. And some of them— some of them forget me. I suppose in the end… they break my heart.

The Doctor: Jackson, if anyone had to be The Doctor I’m glad it was you.