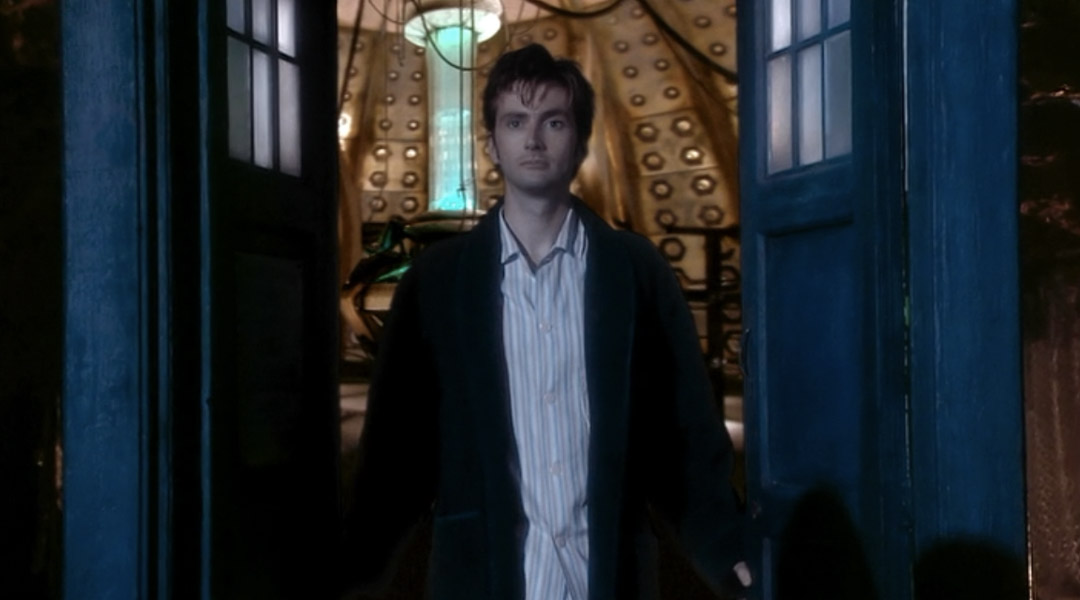 Mickey Smith (Noel Clarke): Who is he? Where’s the Doctor?
Rose: That’s him. Right in front of you. That’s the Doctor.
Jackie Tyler (Camille Coduri): What’dya mean that’s The Doctor? Doctor who?

Rose: Both working.
Jackie: What do you mean both?
Rose: He’s got two hearts.
Jackie: Oh don’t be stupid. Anything else he’s got two of?
Rose: Leave him alone.

Reporter: What about those calling the Guinevere One space probe a waste of money?
PM Harriet Jones (Penelope Wilton): Now that’s where you’re wrong. I completely disagree, if you don’t mind.

Mickey: I can’t even go shopping with you, we get attacked by a brass band.

Jackie: I’m gonna get killed by a Christmas tree!

Mickey: They’ve just gone. What kind of rubbish were they. I mean, no offense, but they’re not much cop if a sonic screwdriver’s gonna scare them off.
The Doctor: Pilot fish.

Daniel Llewellynn (Daniel Evans): You seem to be talking about aliens as a matter of fact.
Harriet Jones: There’s an act of Parliament banning my autobiography.

Harriet: I don’t think we’ve been introduced. Harriet Jones, Prime Minister.
Sally Jacobs: Yes, I know who you are.

Harriet: I don’t suppose we’ve had a code nine? No sign of The Doctor?
Major Blake (Chu Omambala): Nothing yet. You’ve met him haven’t you? All the stuff of legend.
Harriet: He is that. Failing him, what about Torchwood?
Major Blake: How do you—
Harriet: I know I’m not supposed to know about it. I realize that. Not even the United Nations knows. But if ever there was a need for Torchwood, it’s now.
Major Blake: I can’t take responsibility.
Harriet: I can. See to it. Get them ready.

Harriet: Ladies and gentlemen, if I may take a moment during this terrible time. It’s hardly the Queen’s speech, I’m afraid that’s been cancelled. {to someone off screen} Did we ask about the Royal Family? Oh. {to camera} They’re on the roof.

Harriet: Harriet Jones, Prime Minister.
Alex translating for the Sycorax: Yes, we know who you are.

Rose: Somebody’s got to be The Doctor.
Harriet: They’ll kill you.
Rose: Never stopped him.

Sycorax Leader (Sean Gilder): …then your world will be gutted and your people enslaved.
Alex translating: Hold on, that’s English.
Harriet: He’s talking English.
Rose: You’re talking English.
Sycorax Leader: I would never dirty my tongue with your primitive bile.
Rose: That’s English. Can you hear English?
Alex: Yes. Definitely English.
Sycorax Leader: I speak only Sycoraxic!
Rose: I can hear English. It’s being translated. Which means it’s working. Which means— the TARDIS opens
The Doctor: Did you miss me? {The Sycorax leader attacks} You could put someone’s eye out with that. You just can’t get the staff. Now you, just wait. I’m busy. {turns to his friends} Mickey, hello! And Harriet Jones, MP from Flydale North! Blimey! It’s like This Is Your Life! Tea! That’s all I needed. A good cup of tea. A superheated infusion of free radicals and tannin. Just the thing for heating the synapses. Now, first thing’s first. {to Rose} Be honest. How do I look?
Rose: Um… different.
The Doctor: Good different or bad different?
Rose: Just… different.
The Doctor: Am I ginger?
Rose: No, you’re just sort of brown.
The Doctor: I wanted to be ginger! I’ve never been ginger. And you, Rose Tyler! Fat lot of good you were. You gave up on me! {taken aback} Oo! That’s rude. Is that the sort of man I am now? Am I rude? Rude and not ginger.

Sycorax Leader: Who exactly are you?
The Doctor: Well, that’s the question.
Sycorax Leader: I demand to know who you are!
The Doctor: I don’t know! See that’s the thing. I’m the Doctor. But beyond that I just don’t know. I literally do not know who I am. It’s all untested. Am I funny? Am I sarcastic? Sexy? Right old misery? Life and soul? Right-handed, left-handed? A gambler, a fighter, a coward, a traitor, a liar, a nervous wreck? I mean judging by the evidence I’ve certainly got a gob.

The Doctor noticing the glowing orb. And how am I going to react when I see this? A great big threatening button. A great big threatening button which must not be pressed under any circumstances, am I right? Let me guess. It’s some sort of control matrix, hm? Hold on, what’s feeding it? And what have we got here? Blood? Yep, definitely blood. Human blood. A positive. With just a dash of iron. But that means… blood control! Blood control! Aw! I haven’t seen blood control for years! You’re controlling all the A positives. Which leaves us with a great big stinking problem. Because I really don’t know who I am. I don’t know when to stop. So if I see a great big threatening button which should never ever ever be pressed, I just want to do this—
Alex: You’ve killed them!
The Doctor: What do you think, big fella? Are they dead?
Sycorax Leader: We allow them to live.
The Doctor: Allow? You have no choice. See, that’s all blood control is. Cheap bit of voodoo. Scares the pants off of you but that’s as far as it goes. It’s like hypnosis. You can hypnotize someone to walk like a chicken or sing like Elvis, you can’t hypnotize them to death. Survival instinct’s too strong.
Sycorax Leader: Blood control is just one form of conquest. I can summon the armada and take this world by force.
The Doctor: Well, yeah, you could, yeah. You could do that, of course you could. But why? Look at these people, these human beings. Consider their potential. From the day they arrive on the planet, blinking step into the sun. There is more to be seen than can ever be seen. More to do than… No, hold on. Sorry, that’s the Lion King. But the point still stands. Leave them alone!

Sycorax Leader: You stand as this world’s champion!
The Doctor: Thank you. I’ve no idea who I am but that you’ve just summed me up.

The Doctor about his regenerated hand: Of course I’m still The Doctor then.
Rose: No arguments from me!
The Doctor: Wanna know the best bit? This new hand? It’s a fightin’ hand!

The Doctor: Not bad for a man in his jim jams. Very Arthur Dent. Now, there was a nice man. Although what have I got in here? A satsuma. Ah, that friend of your mother’s. He does like his snacks, doesn’t he? But doesn’t that just sum up Christmas. You go through all those presents and right at the end tucked away in the bottom there’s always one stupid old satsuma. {the Sycorax gets up to attack the Doctor who launches the satsuma at a release mechanism} No second chances. I’m that sort of a man.

The Doctor: When you go back to the stars and tell others of this planet—when you tell them of its riches, its people, its potential— when you talk of the Earth. Then make sure that you tell them this: “It. Is. Defended.”

Rose: It’s beautiful! What are they, meteors?
The Doctor: It’s the spaceship breaking up in the atmosphere. This isn’t snow. It’s ash.
Rose: Okay, not so beautiful.
The Doctor: This is a brand new planet Earth. No denying the existence of aliens now. Everyone saw it. Everything’s new.
Rose: And what about you? What are you going to do next?
The Doctor: Well… back to the TARDIS. Same old life.
Rose: On your own?
The Doctor: Why? Don’t you want to come?
Rose: Well yeah.
The Doctor: Do you though?
Rose: Yeah.
The Doctor: Well I just thought… ’cause I changed.
Rose: Yeah, I thought ’cause you changed you might not want me anymore.
The Doctor: Oh I’d love you to come.
Rose: Okay!
Mickey: You’re never going to stay, are you?
Rose: There’s just so much out there. So much to see. I’ve got to.
Mickey: Yeah.
Jackie: Well I reckon you’re mad, the pair of ya. It’s like you go lookin’ for trouble.
The Doctor: Trouble’s just the bits in between! It’s all waiting out there, Jackie. And it’s brand new to me. All those planets, creatures and horizons—I haven’t seen them yet. Not with these eyes. And it is gonna be… fantastic.