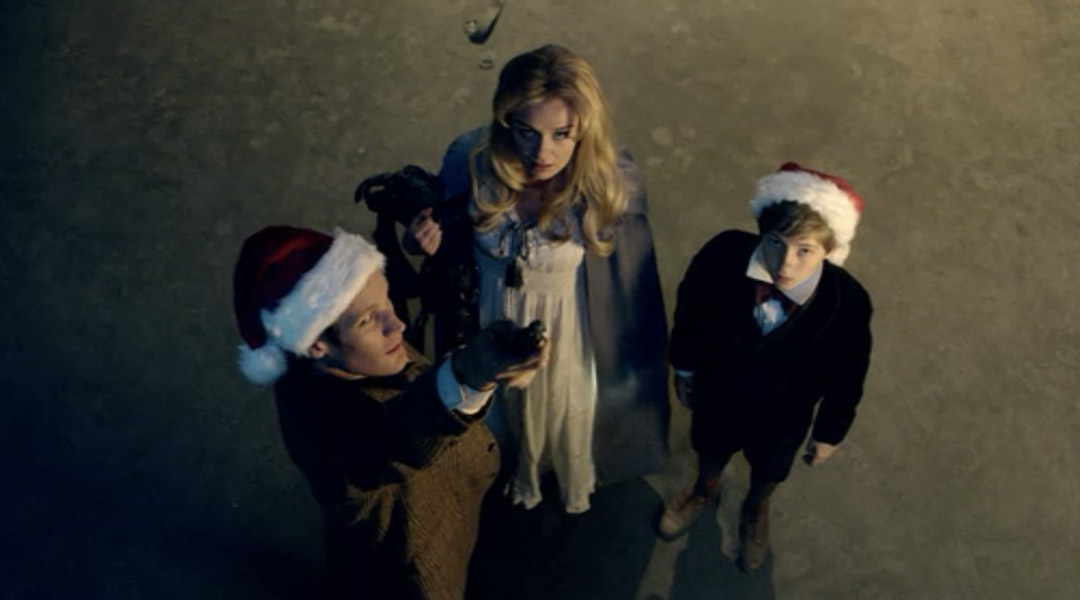 The Doctor: Come along Pond
Captain (Pooky Quesnel): What does that mean?
Amy: It’s Christmas.

Kazran Sardick (Michael Gambon): On every world, wherever people are, in the deepest part of the winter, at the exact mid-point, everybody stops and turns and hugs. As if to say, “Well done. Well done, everyone! We’re halfway out of the dark.” Back on Earth we call this Christmas. Or the Winter Solstice. On this world, the first settlers called it The Crystal Feast. You know what I call it? I call it expecting something for nothing!

Aide: Sorry, sir. The president says there’s a galaxy-class ship trapped in the cloud layer and, well, we have to let it land.
Sardick: Or?
Aide: Well, or it’ll crash sir.
Sardick: Oh. Well that’s a kind of landing isn’t it?
Aide: It’s from Earth, sir. Registering over 4000 life forms on board.
Sardick: Not if we wait a bit.

Son: There’s no such person as Father Christmas!
The Doctor: Oh yeah? {whips out a photo} Me and Father Christmas, Frank Sinatra’s hunting lodge. 1952. See him in the back with the blonde. Albert Einstein, the three of us together. Vroom! Watch out! Okay? Keep the faith. Stay off the naughty list. Oo! Now what’s this, then? I love this. Big flashy lighty thing. That’s what brought me here. Big flashy lighty things have got me written all over them. Not actually. Give me time and a crayon. Now! This big flashy lighty thing is connected to the spire on your dome, yeah? And it controls the sky. Well, technically it controls the clouds. Which technically aren’t clouds at all. Well they’re clouds of tiny particles of ice. Ice clouds. Love that. Who’s she?
Sardick: Nobody important.
The Doctor: “Nobody important”. Blimey, that’s amazing. D’you know, in 900 years of time and space I’ve never met anyone who wasn’t important before.

Sardick: The skies of this entire world are mine. My family tamed them and now I own them.
The Doctor: Tamed the sky. What does that mean?
Sardick: It means I’m Kazran Sardick. How could you possibly not know who I am?
The Doctor: Well. Just easily bored, I suppose. So, I need your help then.
Sardick: Make an appointment.
The Doctor: There are 4,003 people in a spaceship trapped in your cloud belt. Without your help they’re going to die.
Sardick: Yes.
The Doctor: You don’t have to let that happen.
Sardick: I know, but I’m going to. Bye bye, bored now. [Chuck him!] The Doctor won’t leave. Oh look at you, looking all tough now.
The Doctor: There are 4003 people I won’t allow to die tonight. Do you know where that puts you?
Sardick: Where?
The Doctor: 4004.
Sardick: Was that a sort of threaty thing?
The Doctor: Whatever happens tonight, remember: you brought it on yourself.

The Doctor: What am I missing?
Sardick: Get out! Get out of this house!
The Doctor: The chairs. Of course, the chairs. Stupid me. The chairs.
Sardick: Chairs?
The Doctor: There’s a portrait on the wall behind me. Looks like you but it’s too old so it’s your father. All the chair are angled away from it. Daddy’s been dead for twenty years, but you still can’t get comfortable where he can see you. There’s a Christmas tree in the painting, but none in this house on Christmas Eve. You’re scared of him and you’re scared of being like him and good for you, you’re not like him, not really. Do you know why?
Sardick: Why?
The Doctor: Because you didn’t hit the boy. Merry Christmas, Mr. Sardick.
Sardick: I despise Christmas!
The Doctor: You shouldn’t. It’s very you.
Sardick: It’s what? What do you mean?
The Doctor: Halfway out of the dark.

The Doctor: It’s okay.
Sardick: What have you done? What us this?!
The Doctor: Found it on an old drive. Sorry about the picture quality. Had to recover the data using quantum enfolding and a… paper clip. Oh, I wouldn’t bother calling your servants, they quit. Apparently they won the lottery at exactly the same time. Which is a bit lucky when you think about it.
Sardick: There isn’t a lottery!
The Doctor: Yeah, as I say, lucky.
Sardick: Who are you?
The Doctor: Tonight I’m the Ghost of Christmas Past.

Kazran (Laurence Belcher): If you’re my babysitter, why are you climbing in the window?
The Doctor: ‘Cause if I was climbing out of the window I’d be going in the wrong direction. Pay attention.

Kazran: Are you really a babysitter?
The Doctor pulling out the psychic paper: I think you’ll find that I’m universally recognized as a mature and responsible adult.
Kazran: It’s… just a lot of wavy lines.
The Doctor: Yeah. Shorted out. Finally, a lie too big.

Kazran: Are there any phase spiders in here?
The Doctor: Nah. Not at this time of night. They’ll all be sleeping in your mattress.

Kazran: What’s happening?
The Doctor: Well, concentrating on the plusses, you’ve definitely got a story of your own now. Also, I got a good look at the fish and I think I understand how the fog works. Which is going to help me land a spaceship in the future and save a lot of lives. And I bet I get some very interesting readings off my sonic screwdriver when I get it back from the shark in your bedroom.
Kazran: There’s a shark in my bedroom?!
The Doctor: Oh fine! Focus on that point.

The Doctor: Just agree with me, ’cause I’ve only got two go’s and then it’s your turn.
Kazran: Two go’s?
The Doctor: Two arms! Right then. okay. Geronimo. Open wide!

Kazran: It’s bigger on the inside.
The Doctor: Yes, the color really knocks the walls back. Shark-in-a-box. To go.

Abigail (Katherine Jenkins): You are a doctor, you say. Are you one of mine?
The Doctor: Do you need a doctor?

Abigail: If you should ever wish to visit again.
The Doctor: Well, you know, if I’m ever in the neighborhood.
Kazran: He comes every Christmas Eve. Yeah, he does. Every time. He promises.
The Doctor: No, I don’t— .
The Doctor and Kazran: Merry Christmas!

Sardick: New memories. How can I have new memories?

Kazran: I’ve never kissed anyone before. What do I do?
The Doctor: Well. Try and be all nervous and rubbish and a bit shaky.
Kazran: Why?
The Doctor: Because you’re going to be like that anyway. Might as well make it part of the plan and then it’ll feel on purpose. Off you go then.
Kazran: Now? I kiss her now?
The Doctor: Kazran, trust me. It’s this or go into your room and design a new kind of screwdriver. Don’t make my mistakes. Now! Go!

Abigail: I have something to tell you.
Kazran: A bad thing?
Abigail: A very bad thing.
Kazran: What is it?
Abigail: The truth.

Kazran: What are we going to do?
Abigail: There is nothing to be done.

Sardick: Well, Christmas is for kids, isn’t it? I’ve got some work with my dad now, I’m going to focus on that. he takes off the bow tie. Get that cloud belt under control.
The Doctor: Sorry. I didn’t realize I was boring you.
Sardick: Not your fault. Times change.
The Doctor: Not as much as I’d hoped.

Amy: Hello.
Sardick: Who are you? What are you doing here?
Amy: You didn’t think this was over, did you? I’m the Ghost of Christmas Present.

Amy: They’re holograms. Projections like me.
Sardick: Who are they?
Amy: The people on the ship up there. The ones that you’re going to let die tonight.
Sardick: Why are they singing?
Amy: For their lives.

Captain: Sir, I understand you have a machine that controls this cloud layer. If you can release us from it we still have time to make a landing. Nobody has to die.
Sardick: Everybody has to die.
Amy: Not tonight.
Sardick: Tonight’s as good as any other night.

The Doctor: I’m sorry. I didn’t realize.
Sardick: All my life I’ve been called heartless. My other life—my real life. The one you rewrote. Now look at me.
The Doctor: Better a broken heart than no heart at all.
Sardick: Try it. You try it. Why are you here?
The Doctor: ‘Cause I’m not finished with you yet. You’ve seen the past, present. And now you need to see the future.

Abigail: We’ve had so many Christmas Eves, Kazran. I think it’s time for Christmas Day.

Rory: Got any more honeymoon ideas?
The Doctor: Well there’s a moon that’s made of actual honey. Well, not actual honey. And it’s not actually a moon. And technically it’s alive. And a bit carnivorous. But there are some lovely views.