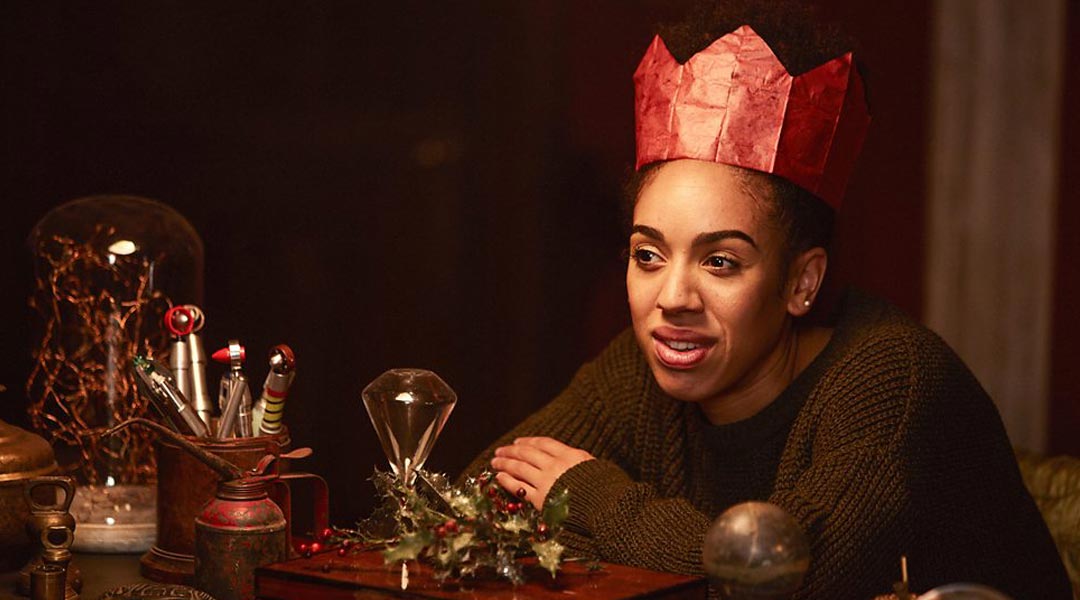 Bill: But I’m not a student. I’m not part of the university. I never even applied.
The Doctor: We’ll sort all that out later.
Bill: You kind of have to sort that out earlier.

Bill: Oh. Um, people just call you The Doctor. What do I call you?
The Doctor: “The Doctor”.
Bill: But Doctor’s not a name. I can’t just call you Doctor. Doctor what?

Bill: Going anywhere for Christmas?
The Doctor: I never go anywhere.
Bill: That’s not true. You go places. I can tell. My mom always said with some people you can smell the wind in their clothes.
The Doctor: She sounds… nice.
Bill: She died when I was a baby.
The Doctor: If she died when you were a baby when did she say that?
Bill: In my head.

Bill: I see my face all the time. I never liked it, it’s all over the place. It’s always doing expressions when I’m trying to be enigmatic. I know my face. And there was something wrong with my face in the puddle. What could be wrong with your own face? watches as the Doctor runs past below her.

Bill: Are you with Neville?
Moira: Why would I be back with Neville after last time? Why do you think I’m such an idiot?
Bill: Well you’re calling from his phone.

The Doctor: Nothing gets through these doors.
Bill: But they’re made of wood. They’ve got windows!

Bill: Look at this place. It’s like a—
The Doctor: Spaceship.
Bill: Kitchen.
The Doctor: A what?
Bill: A really posh kitchen. All metal. What happened to the doors though? Did you run out of money?

Bill: Oh my god. I understand.
Nardole: You what?
Bill: The last thing she said to me. She promised she wouldn’t leave without me.
The Doctor: The last conscious thought, driving her across the universe. Never underestimate a crush.

Nardole: That’s the Doctor for you. Never notices the tears. He walks off.
Bill: I don’t think they’re mine.

Bill: I saw it all for a moment. Everything out there. She was going to let me fly with her. She was inviting me. I was too scared.
The Doctor: Scared is good. Scared is rational. She wasn’t human anymore.
Bill: Will we see her again?
The Doctor: Don’t see how.

The Doctor: I just want to fix something.
Bill: Whoa. What are you doing?
The Doctor: Don’t worry, this won’t hurt at all.
Bill: No, but tell me.
The Doctor: Nothing.
Bill: Yeah, ’cause I think you’re going to wipe my memory. I’m not stupid you know. That’s the trouble with you, you don’t think anyone’s ever seen a movie. I know what a mind wipe looks like!
The Doctor: I have no choice. I’m here for a reason. I am in disguise. I have promises to keep. No one can know about me.
Bill: This is the most exciting thing that’s ever happened in my life. The only exciting thing!
The Doctor: I’m sorry.