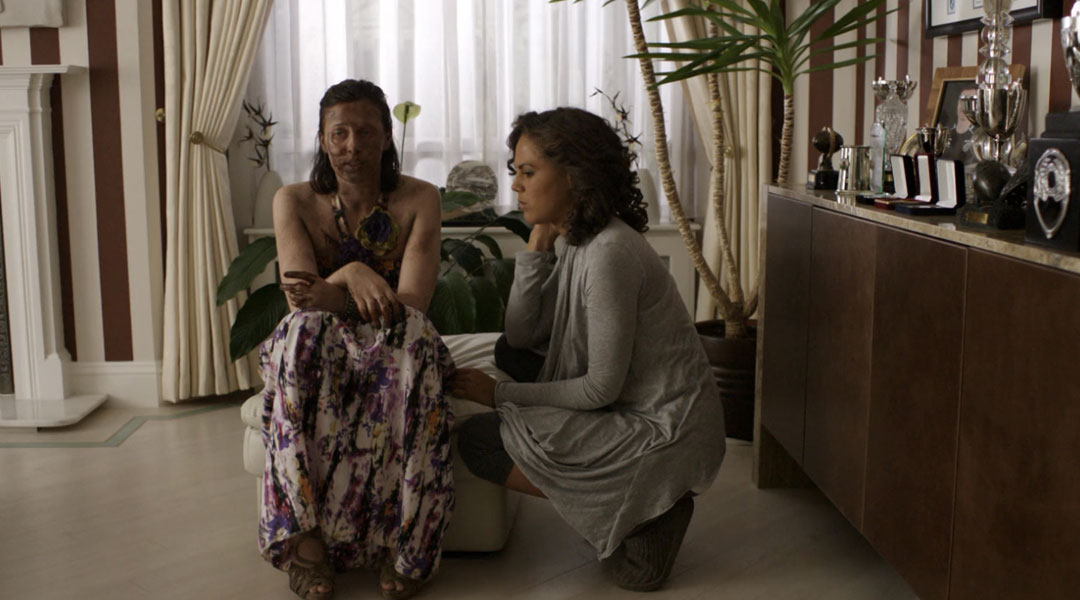 Mitchell: George, where’s Annie?
George: I don’t know. Probably off on one of her midnight rambles. She doesn’t need sleep. Unlike some of us.
Mitchell: Can I have a word?
George: Could it wait until the morning—or at least until I’ve after I’ve peed?

Mitchell: I think Annie might fancy me.
George: Finally.
Mitchell: You knew?
George: Oh, Mitchell, Annie is many things but subtle she is not. You’ve rescued her from Hell. That kind of thing tends to turn a girl’s head.
Mitchell: How long have you known?
George: I don’t know, a couple of weeks. Pretty much since she came back. And for future reference, no one says “fancy” anymore.
Mitchell: And you didn’t think to tell me?
George: Um… nope. Because I’m not twelve. Did you— Did you seriously not pick up on any of this? That whole… guardian angel business?
Mitchell: Okay, so she hasn’t actually told you.
George: Oh wow. We are twelve, aren’t we. No, she hasn’t told me she “fancies” you. She doesn’t need to. Her body language is deafening.

Sasha (Alexandra Roach): Why don’t you take a picture, you nosy bitch!
Annie: You can see me?
Sasha: What? Oh… think you’re better than me do you? Little Miss Soddin’ High and Mighty, is it?
Annie: No! {Annie takes off}
Sasha: Is it?
Annie: Not today, thank you!
Sasha: Come on then!

Annie: I was walking past this club on Westland Street. You know that down-market version of Ritzys. Yeah I know, like that’s really possible. Anyway, this dead woman got thrown out of the club, but, but she could see me!

George: What have we got?
Mitchell: A drunk, dead woman. Shouting.
George: That’s not a ghost. I can smell her.
Mitchell: What, from here?
George: Oh yeah. Even without the whole wolf thing.
Annie: Well of course you can smell her. She’s got a body! {they look at her.} I’m sure I mentioned that.

Mitchell: So she’s dead, but she’s got a body?
George: Which is rotting.
Mitchell: This is not good.
Annie: That’s why I was so scared. If she was just dead dead, no problem. But that is just weird.

Mitchell: So what do we call you?
Sasha: Anything you like, sweetheart. {Annie yanks her hair with the flatiron}.
Annie: Oh! Oh, sorry. Look, you got caught there. Caught a bit of your hair, sorry.
Sasha: Don’t worry, babe. I can tell you’re not used to a beauty regime.

George: That’s a beautiful dress, Sasha. Wonderful cut. Have you, have you been to hospital recently?
Sasha: Okay. Confession time. I was involved in a car accident. But, you know, it wasn’t my fault. Well, I was texting while I was driving, but that’s not the same as making a phone call. In my Beemer. Prussian blue. Heated seats, all the extras. I love my little extras.

Annie: So you died, did you?
Sasha: Well no. I mean obviously I didn’t. Yeah, but apparently it was touch and go. Oh, and let me tell you, the doctors were very interested in me. Wouldn’t leave me alone. Kept on prodding and poking me. And I said, you better warm that up before you put it near me! Woo! I know! What is that smell?

Nina: Well I think someone’s in denial.
George: How could she not know she’s dead?
Mitchell: Solves one mystery anyway. The mortuary’s suddenly been off limits.
George: No, that was a chemical leak. Or they were hiding a zombie.

George: Well at least she’s not attacking us. Don’t they usually attack people?
Mitchell: No. They don’t “usually” do anything because they don’t usually exist.
George: What about eating brains?
Mitchell: I don’t know the rules. I just know that she can be seen and she’s rotten.
George: Mm hm. I can vouch for that. Do you think she’ll just continue rotting until she’s not, you know, soupy?

George: Annie’s invisible to normals, you can’t be seen on CCTV. I think you can manage sneaking one zombie back into a hospital.

Nina: Look, I’ve done three tests. I’m pregnant, George. It’s happening. Or rather, it’s not. I can’t, I can’t… I can’t let this go any further. I’m sorry.
George: Okay, so um… let me get this straight. If I hadn’t have found this, would you have just had an abortion without telling me?
Nina: No. I was planning—
George: Oh my god, you were just going to do it, weren’t you? No discussion, no nothing.
Nina: Don’t you dare judge me. This isn’t some teenage mistake, George. This is a child of monsters. I mean, who even knows what it could be? Just the idea is terrifying.
George: It could be fine. We’re both fine. Most of the time.
Nina: It’s my body, George.
George: Yeah, well part of it isn’t.
Nina: Excuse me?
George: There is part of me in there, and as the father I have just as much right as you to decide what happens to our child.

George: I only got up for a pee!

Mitchell: I don’t think it was just Sasha. There’s four subject sheets here. All came back to life, all at the same time. I think they were testing them. Trying to find out what they were, how they worked, if it could spread. I think they were scared.
Annie: I know the feeling. Did it say anything about anesthetic in there?
Mitchell: Yeah. “Anesthetic ineffective.” How did you know?
Annie: They did it anyway. What did they do with them afterwards?

Mitchell: So you’re a vampire.
Graham (Tony Maudsley): Yeah. I am a Brother of the Blood. Name’s Graham. Well, Graham was my mortal name. But when I was reborn to the night I took the name Obsidian. Graham’s fine. Obsidian, I don’t know what I was thinking. It’s a shit name.

Mitchell: Yeah. Um. Alright, Graham. I’m kind of busy right now, so can I help you with anything?
Graham: Oh, I feel a little bit embarrassed now, but I am a bit of a fan boy. Well, you could say “fang boy.”
Mitchell: Yeah yeah yeah. I get it.
Graham: And I was a massive Neil Diamond fan. Do you know Neil Diamond? No, doesn’t matter. But that kind of gave me the idea. So now I’m on a sort of pilgrimage, you know, like a star tour? And I’m visiting all the legends in our little world so naturally—
Mitchell: You came to see me.

Nina: So we’re a supernatural hostel now, are we? What next? A mummy?

Mitchell: We owe her, George.
George: We owe her? Why do we owe her?
Mitchell: She came back to life two weeks ago. All of them did, when I was on the other side.
Annie: Saving me.
Nina: So. Hang on, what are we saying? That Death’s Door was engaged?
Annie: Her spirit couldn’t pass over because of me.
Mitchell: We made her. We owe her, all of us do.

Annie: We should probably go, Sasha. ‘Cause he’s bound to call the police.
Sasha: No he’s not, what’s he going to say? My dead girlfriend came back, and… oof. ‘Cause I am dead, aren’t I? I keep saying I’m not but, oh. I can smell myself.

Nina: It’s not always about the wolf, George.
George: So what are you saying?
Nina: I’ve got other stuff—old stuff going on in my head, it’s… it’s not you.
George: “It’s not you, it’s me.”
Nina: No. It’s becoming a mother and, um, all that means. See, um, my mum used to hit me. All the time. For my own good, you know, and she… always reminded me that I was a mistake and, uh, I’d ruined her life and I was worthless and I’d never amount to anything. She, ah… she made me hate myself.
George: I’m sorry, you’ve— you’ve never said.
Nina: No, there’s never really a good time to bring up that conversation. See, this thing inside me, whatever it is, it’s a baby. And I will become a mother. And that terrifies me more than any werewolf bullshit. You see, I was pretty messed up even before you scratched me.
George: No you’re not. You are strong and you are beautiful. You are not in this alone. I will always be there.
Nina: Sorry. It’s not enough George.

Mitchell: You are in my home. With my friends. That is a big no no.
Graham: They could be my friends too.
Mitchell: No, they couldn’t!

Graham: That girl, she’s really holding a torch for you. And I’m thinking she doesn’t know, does she? About his greatest work. About all those people he ripped apart in that train. The Box Tunnel 20. And I think she needs to know. I think she needs to know about the real Mitchell. See how she feels about him then. Or we could maybe, just maybe, forget about the whole thing. Sit down, watch a bit of Wipeout, have a biscuit. I think that’d be for the best, don’t you?

Nina: Don’t worry, I’m not drinking. Gotta keep an eye on Priscilla over there. I’m the designated woman-with-a-pulse.

George: Mitchell. Should we get pissed?
Mitchell: You. Are a genius, George.

Mitchell: They should be back by now.
George: They’re all adults. And two of them are dead. I think they’ve already seen the worst life has to throw at them.

Graham: I really don’t think you want me to talk.
Mitchell: I don’t care anymore. Maybe it’s time they knew what I really am. I don’t deserve them as friends. I never have. So how about this, right—you tell them what I did. Or I will.
Graham: You’re bluffing.
Mitchell: Oh, if you think that then you really don’t know me at all, do you?

Mitchell: You don’t have to do this.
Graham: You think I can’t? You think I don’t have it in me?
Mitchell: It isn’t hard to do. The hard part is not doing it. And I failed. And I’ve regretted it every minute of every day since.
Graham: Then you are weak.

Mitchell: How messed up are we, huh—are vampires as a species—that my story can be seen as inspirational. It has to end. The story has to die. It’s gonna hurt. I’m sorry. I’m so sorry.

Graham: Tell people that you liked me.
Mitchell: I will.

Nina: George. would you like to have a little… hairy baby… with me?
George: Yes I would.

Annie: Are you okay?
Mitchell: No. No, I’m not. Listen, I need to… I need to tell you something. I’ve done such things, Annie. I’ve done such terrible, unforgivable things. And I need to tell you.
Annie: No you don’t.
Mitchell: I need to do this.
Annie: No, you don’t. Mitchell, listen. I know what you are. I’ve known since day one. All those things you’ve done, they’re in your past right? It’s who you are now that counts. And what you’ve done for me, for George, for all of us, that’s the man I know. That’s the man I trust. And… that’s the man I want.