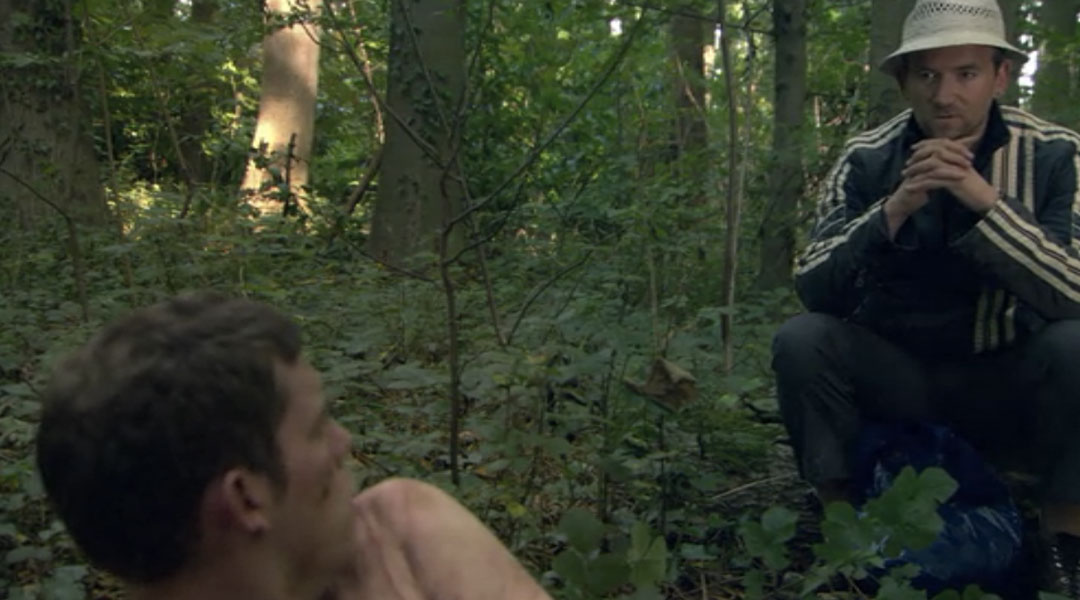 Mitchell: He should be dead within thirty seconds. The werewolf heart is about two-thirds the size of a human’s. But in order to shrink, first it has to stop. In other words, he has a heart attack. All the internal organs are smaller. So while he’s having his heart attack, he’s having liver and kidney failure too. And if he stops screaming, it’s not because the pain has dulled—his throat, gullet and vocal chords are tearing and reforming. He literally can’t make a sound. By now the pituitary gland should be working overtime, flooding his body with endorphins to ease some of the pain. But that too is shut down. Anyone else would have died of shock long ago, but it won’t let him. And that’s the pain I find most remarkable. It drags him through the fire and keeps him alive and even conscious to endure every second. Nothing like this could just evolve. Is it the fingerprint of God? An impossible lethal curse spread by tooth and claw. Victim begets victim begets victim. It’s so cruel it’s… perfect.

Tully: Look, I’ve been doing this for years. And there’s loads of things that I’ve discovered. Not just the clothes. Tricks of the trade. Things that’ll make it just a little bit easier.
George: I don’t want to make it easier. I don’t want it to be something that I accept and allow into my life.
Tully: Oh no, sure. You’re a single hospital porter. I bet your week’s a round of ambassador’s receptions.

George: I have a life. I have friends. I live with some friends.
Tully: Eh.
George: I do! A ghost and a vampire, actually.
Tully: Vampire.
George: Oh yes. They exist too, you know.
Tully: Yeah, I know they exist. I keep getting beaten up by the bastards.

Mitchell: This is what being human is about. This is what I chose.
George: You chose?
Mitchell: You chose. We all chose. We can’t just dip our toe. We need to dive into the churn of humanity. Laugh with them, listen to their stories.
George: About Vin Diesel.
Mitchell: A remarkable man, I’m starting to realize.

Mitchell: What’s more suspicious—three shadowy, secretive people who never come out, never talk to anyone. Or three friendly, welcoming guys. Always nice and chatty. Their door’s always open.
George: I don’t mean just risky for us.
Mitchell: We should hide in plain sight. Stop being ashamed. Invite the world in.

George: What the hell has brought this on? Since Becka died he’s barely left his room, barely said a word. And now this?
Annie: Maybe he’s had a blow to the head.
George: I’m sorry?
Annie: Happened to my nan. She got hit in the head by a radio-control plane at the county fair. From that moment, obsessed with pygmy goats.
George: There wasn’t a single bit of that sentence I understood.

George: We have to put a stop to this. Doesn’t he understand? These people are British. You’re not allowed to talk to your neighbors until you’ve nodded at them for fifteen years.

George: You are not meeting my friends.
Tully: I am house trained, you know.

Tully: Can I ask you a question?
Mitchell: Please.
Tully: There’s not many vampires that would break bread with a werewolf.
Mitchell: I’m lapsed.

Mitchell: Where you sleeping tonight?
Tully: In the arms of Mother Nature, as always.
George: Is just saying “outside” really that hard?

George: What the hell are you doing?
Mitchell: I’ve told you. We need to embrace humanity. Let the world in.
George: Yeah, but he isn’t human.
Mitchell: Well in that case neither are you.

George: You know what this is? You’ve forgotten what it’s like to see your own reflection. To be faced with yourself. What you are every day. Mitchell, the house is my way of coping. I want to close that door—I’m allowed to close that door and forget.

Tully: Do you— Can I ask? Do you sleep?
Annie: Mitchell says I should try, even if it’s just a doze. He says it’d do me good. But I don’t know. Don’t think I want to.
Tully: Why?
Annie: Well, I might dream.

Nina (Sinead Keenan): …By now somebody else will be in Mrs. James’ bed, leaving her—as they say—without portfolio.
George: So where do I take her?
Nina: What’s your place like?
George: What?
Nina: I don’t know, could be the start of something. She has a twinkle.

George: What’s that?
Tully: It’s a chicken on a piece of string.
George: And that helps us how exactly?

Lauren (Annabel Scholey): Morning. You gonna let me in? You have to invite me across the threshold. That is such a mental rule. Who made that up?
Mitchell: You— You are not coming in here.

Mitchell: What are you doing here? Herrick’s already cut me off from the rest of the vampires. If he thinks sending you here—
Lauren: Why does this have to be about Herrick? What is it with you two? You’re obsessed with each other. It’s totally gay.

Mitchell: It’s good we’re doing this. Especially now. Throwing the doors open like this… sends a message.
George: What do you mean, “especially now”?
Mitchell: Nothing. It, ah, came out wrong.
George: And sends a message to who? There’s something you’re not telling us.
Mitchell: Like what? What?
George: A few weeks ago, Tully was in London and got attacked by some vampires.
Mitchell: Vampires are arsholes. This is hardly news.
George: Yes. But Tully says it’s happening more and more. Like suddenly they’ve stopped hiding. But it’s the things they’re saying now, about time. How their time is coming.
Mitchell: Vampires have been saying their time is coming since the Crusades. Every now and then someone along, they get everyone all excited. It never comes to anything.
Annie: What, so something has been happening?
Mitchell: It’s nothing! Can we— ? It’s nothing. I promise you. I need a wee. {He walks out.}
George: Well. I feel totally reassured.

Mitchell: So Carol from number twelve is gonna lend us Casablanca.
George: Why?
Mitchell: I’m only in it!
Annie: Get out!
Mitchell: Yeah. I’m just an extra. In the bar. And you can’t actually see me, obviously. But I do knock over a chair at one point and you can see that.
Annie: You in Casablanca. How did you swing that?
Mitchell: I know people. I move and shake.

Annie: You changed your tune. You love old movies.
George: Hey, George is as George does.
Mitchell: Did you really just say that? Did you actually say those words?
Annie: Oh my god. You’re Tully’s Mini-Me.

Nina: I’ve always wanted to do it with a porter.
George: Are you serious?
Nina: Am I serious? Does a chicken have teeth?
I don’t know if it’s the polyester jacket or the whole minimum wage thing. But to meet one that not only hates women but attempts to humiliate them in front of his friend as well. Oh, man!

Annie: This is making me feel very uncomfortable now.
Tully: Then I think it’s about time we went upstairs. {He leans in for a kiss and she disappears.}

Nina: What were you doing with Mrs. James? Have you been bothering her?
George: I was just talking to her.
Nina: About what?
George: New Zealand, if you must know.
Nina: Why?
George: Her son lives there.
Nina: I mean why were you talking to her?
George: The other day I took her to physio, she said she wasn’t getting any visitors so I said I’d visit her.
Nina: Yeah, well, I suppose that’s easier than actual work.
George: It’s my day off.
Nina: Oh. Right. Well, ah, that’s… that’s good.
George: Can I go now?
Nina: Yeah.

Annie hiding outside the apartment: Mitchell?
Mitchell: Annie? What are you doing out here? Annie, tell me what’s happened.

George: Do you know the difference between you and him?
Mitchell: Hm. I don’t know, I don’t have to shave my palms?
George: I think that’s actually racist!

Annie: It feels like we’re losing him. Everything’s just… falling apart.
Mitchell: Things move and shift and settle again. It’s like those— what are those snow storm things called?
Annie: Snowstorms.
Mitchell: Yeah, ’bout so big, glass?
Annie: No, they’re called snowstorms.
Mitchell: Right. Well, them. You shake them and it’s all mad and then it settles again. That’s what time is like.

Annie: Look, I want you to be honest with me. Is this it? If nothing changes will I just stay like this? Here, but… not here. Forever.
Mitchell: Yeah.

Tully: You can feel it too, can’t you? Huh? The fire in your gut, the expectation, the hunger.
George: It frightens me.
Tully: Then give in to it. Drown in it. Let him in, the Big Bad Wolf.

Tully: I’m the one who attacked you. I’m the one who gave you this gift.
George: What?
Tully: I don’t remember what happened that night, but then I saw it in the paper. That someone had died and that the other person had survived. And I knew, I knew. And then it gave me the idea. The thought of you, every time I close my eyes.
George: That’s— No, that’s not true.
Tully: Oh George, I was going to tell you straight away. I almost did.
George: Why didn’t you?!
Tully: It’s a complex thing. It’s a glorious thing.
George: This isn’t a glorious thing, it’s a curse! This isn’t a gift. It’s God stamping on us with His boot.

George: This is becoming a habit. I come in here, look at the wreckage, and I say sorry.

George: My name’s George. And I’m a werewolf.
Mitchell: Hello George.
Annie: Just to warn you, if you go in for a hug Mitchell will try to kiss you.
George: My god, I leave you alone for five minutes.
Annie: It’s like being attacked by an ironing board.
Mitchell: If I had intended to kiss you I’d have put on some chapstick first.

George: The first time we met, you didn’t know what you were doing. I understand that. The second time. {He throws him the bag.} There won’t be a third.

Tully: This is you now. There’s no cure, there’s no way out. It’s in every cell. The only thing left is your conscience. But there will come a time when you’ll surrender that too. When you use what you are.
George: You’re wrong.