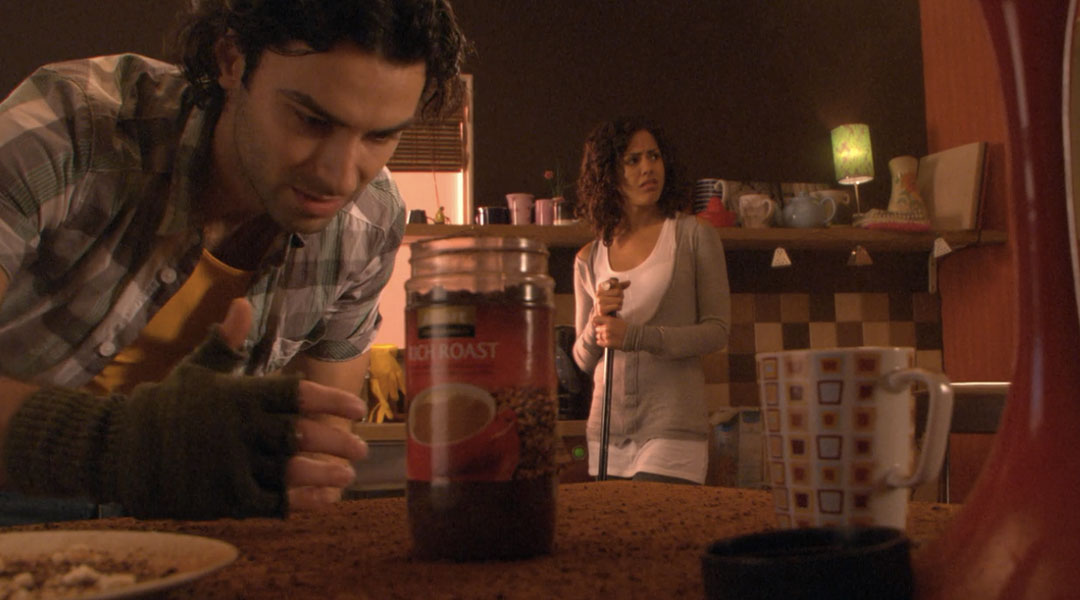 Mitchell: Where do I belong? Where do I fit? Who are my people? Where do my loyalties lie? We all choose our tribe. It’s that need to belong. To live within boundaries. ‘Cause it’s scary on the outside; on the fringes. Some labels are forced on us. They mark us, set us apart ’til we’re like ghosts, just drifting through other people’s lives. But only if we let the labels hold. You can piss your whole life away trying out who you might be. It’s when you’ve worked out who you are that you can really start to live.

Herrick (Jason Watkins): He never rings, he never writes…
Mitchell looking for Lauren: Go and get her. She’s coming with me.
Herrick: I’m sorry, Mitchell. It’s really not going to happen.
Mitchell: You don’t get to decide this, Herrick.
Herrick: Well I do, actually. Because, you just keep hurting her, Mitchell. You just keep hurting her! You recruit her, that’s fine. Then you just leave her.

Herrick: You rip her mortality away and then you try and patch it up with these scraps of human behavior! That is cruel, Mitchell! Why can’t you just let her be the thing you made her?
Mitchell: And leave her to the likes of you?
Herrick: At least we’re consistent.

George trying on another shirt: Well?
Mitchell: This, ah, non-date. You gonna break it to her you cross-dress?

Annie: And for all I know this could be perfectly normal. You find out your fiancé murdered you, you become a “throwing things about” ghost.
Mitchell: Poltergeist.
Annie: See. You know the terms. You understand how this works. Do you think I can channel it? Because I have been dying to pull that fridge out and clean behind it.

George: It’s just occurred to me. I was on the jaws of a change when me and Nina…
Mitchell not wanting details: Yeah yeah yeah.
George: You know, I had the wolf in me.
Mitchell: So did Nina.
George: Would you stop snickering! This is not a joke. I really really like Nina. And I thought that— well, I hoped that she liked me. But what if she’s only interested in the wolf? {they consider it.} Ah. Oh, oh, thank you for, “Oh no, George. How could that be possible?”.

Nina: You’re pissed off with me?
George: No. Nina, no! Your commitment to your job, it’s, it’s so attractive. Your passion, your… your… commitment. It’s up there with… ah.. er… !
Nina helping: My breasts?

Mitchell: Look, I’m kind of busy right now, so could you just cut to the bit where you make me feel guilty? Try and drag me back, make a scene.
Lauren (Annabel Scholey): Not this time. No guilt trip, no appeal. No tricks, no tears.
Mitchell: Okay, then what do you want?
Lauren: I’ve come to say goodbye. We’ve got the message, we’re leaving you alone.

Mitchell: You know what I can’t get my head around?
George: Quantum mechanics?
Mitchell: Bernie not knowing Laurel and Hardy. Immortality can make you feel so old.
George: He’s a good kid though, isn’t he? Thoughtful. Well-mannered.
Mitchell: Reminds me so much of me at that age.
George: Oh. The rampaging ego came much later, then?
Mitchell: We all build some sort of defense against the world. Like sarcasm.

George: They got you too?
Mitchell: I managed to dodge most of it.
George: Shame the house couldn’t. It’s covered in rotten tomatoes. Who keeps their rotten tomatoes? Who looks in the salad cooler, sees tomatoes on the turn and thinks, “Oh no, no. I’ll hang onto those in case some pedos move in opposite”.

George: We’ve been deluding ourselves we could ever be accepted here by proper human beings. We are monsters, Mitchell. We deserve to be cast out.

George: I’m bad news, Nina. I’ve said so all along. Everything I touch turns to shit.
Nina: Because you let it! Look, if you’re having an attack of—
George: You think I’m having a down day, I’m not. Trust me. There is stuff you don’t know about me. Really dark, dangerous, nasty stuff and when you do know it, you’ll walk. So I’m only cutting to the chase. Well, not chase, because I will let you go. I won’t come after you.

Mitchell: Owen’s on his way over. {a vase explodes and Annie storms in}
George: What the— ?
Annie: He can’t.
Mitchell: Well he can. It’s his house.

Annie: No, I can’t have him in the same room knowing what he did to me. I will bring this house down!
Mitchell: Let’s get you upstairs, we’ll do everything we can to keep Owen down here, okay?

George: Annie, keep it together.
Annie: It is like he is killing me all over again.

George: Nina please. Just go. I am not a— It’s not kids or anything those idiots out there say. But trouble follows me like a curse. And you deserve so much better.
Nina: Yeah, I would have listened. Years from now, when you’ve pushed everyone away—and you will—let that haunt you. I would have listened.

Herrick: Someone’s made a very serious allegation about you, Mitchell.
Mitchell: How did you hear about that?
Herrick: What, and all this time you’ve been thinking I’m a Kiss-o-gram?

Mitchell: Tragic, misunderstood monster chased away by the mob.
George: Can you blame them? That lot are right. I mean not about the hats. There are some seriously mad hats there. But the likes of us. No. No, we’re not fit to live among decent people.
Mitchell: It’s a good job we don’t then.

Annie: I’m making a break with the past. Everything that Owen and I ever had. That old life? Can go to ash.

Annie: Now I have a purpose. A reason to be here. Owen has taken everything he’s ever going to take from me. He’s not taking you two. Or this house. I’ve never felt more alive.

Mitchell: They’re only human? Then it’s our mistake wanting to be like them!

Nina: I thought I’m supposed to stay away from you.
George: I’ve just seen a child killed in front of me.

George: I know. Nina. When I tell you I’m a man with a secret… I’m being as honest as I can be right now.
Nina: But you’re not ready to tell me what those secrets are.
George: Can you live with that?

Nina: You’re not the only one with secrets. Is your imagination doing overtime, hm? “What the hell am I getting into?” People are bastards. That’s all you need to know.

Fleur (Julia Ford): It’s all my fault. He tried to explain but, stupid bitch, I wouldn’t listen.
Mitchell: I can help you, Fleur. The both of you.
Fleur: How? He’s not coming out of this. They told me that. I can hear his heartbeat fading. I’m here to watch my son die. How can anyone help me through that?
Mitchell: I know death doesn’t have to be final. I’m proof of it.

Mitchell: Bernie doesn’t have much longer. Not as you know him. I can give him a new life if that’s what you want.
Fleur: As Dracula?

Mitchell: I died a hundred years ago. A young man just sent off to war. But I’ve lived more since then than I ever thought was possible.
Fleur: Alright, you tell me this then. Honestly. If this is the choice that I’m left with. If you were me, would you choose that life for your son? Because I don’t see much happiness in you, Mitchell.

Fleur: Oh goss. What about when I die? What will happen to him?
Mitchell: He’ll be looked after.
Fleur: But should I do it too? Should I become one?
Mitchell: No. You need to stay as you are. You have to remind him and keep him… keep him good.

Mitchell to Herrick: I’m in.