So here’s the deal: Sundays are now Odds and Ends Day at planetclaire. For the time being, I’m going to try to cut down on the random nonsense I normally post during the week, and just save it up for Sunday.

I hate Sundays. I’ve said it before. And yet, I also love Sundays. When I was in college, Sundays were the ultimate TV night. Good shows on from 6 PM straight until 1 AM. A TV addict’s paradise.

Nowadays, not as much, but Sunday is still a day I can do nothing and not feel guilty.

I actually hung out with moms today. She has no boxes in her apartment. After two days. Man, that woman…

Driving home I was looking at all the Christmas decorations along the parkway and lakes.

Minneapolis is a mill town. Is in fact referred to as Mill City. And in the heart of Minneapolis are a series of interconnected lakes. I can’t describe the homes around them. They’re all different styles of architecture. Some of them take up a quarter of a block. And these are NOT small blocks. The house at the beginning of Mary Tyler Moore is along the lake. There’s a house built to accommodate a helicopter on the roof.

And they’re all decorated for the holidays. Geez. I’m not going to be living there anytime soon. They’re beautiful.

I do have lights and a tree.

I don’t however have heat.

I dealt with this back in college. I would like to think that 1996’s Starving Student Claire deserves heat in 2004.

That apartment was my first. It was $455 a month for a two-bedroom apartment. And it was huge.

Let me restate that: everything was huge except for my bedroom.

My doors were barn doors that never closed completely. But there was a front room, a living room, and a large kitchen. It was terribly insulated. Although we had control over the heat, winters were harsh. We took to keeping sweaters by the front door for guests.

That was also Ramona’s first apartment. The bathroom had a club foot tub that was filthy underneath. And she of course took to hiding out behind it as a kitten. Made me nervous. 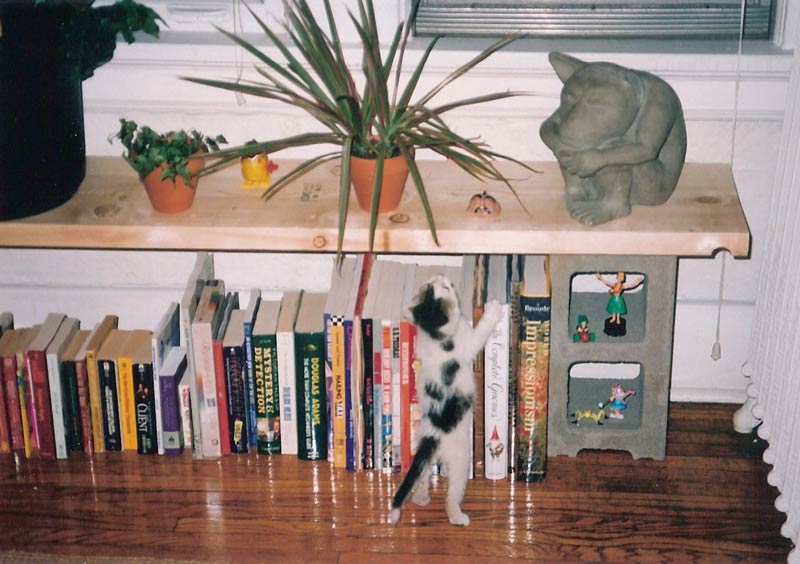 Anyway, there was a period of time during one summer that I had extreme insomnia. For me, anyway. I couldn’t fall asleep before 6 in the morning. If I tried to go to sleep, I’d just lay there. So I stayed up smoking cigarettes and watching TV until I was finally sleepy.

One night I had actually been able to fall asleep early. It was a fitful sleep, but it was sleep. I was startled out of bed around 2 in the morning by a loud thud. I jumped out of bed and went in the direction of the thud, thinking it was Ramona falling out of a window. But Ramona was sitting peacefully on the carpet. Confused, I wandered back to bed, decidedly not worried about some random sound over actual sleep.

Ten minutes later, I heard Ramona wander into my room.

This was at a time that I didn’t know that she had allergies, so her health was not great. And she often would try to express her anxiety by peeing in my room. Lots of fun.

And it sounded like she was peeing. I bolted upright, flipped on the light, and tried to ascertain where Ramona was so I could kill her.

When a bat flew at my head.

One of those non-ending screams. The thing was swooping back and forth in my room. Ramona was going crazy, running around wildly, confused as hell.

Still screaming, I dove under my comforter.

After a minute or so, I realized that screaming wasn’t doing much for the bat situation. I slowly crawled out of bed and crouched on the floor—covers still completely covering body—and inched slowly… slowly out of my room. I coaxed Ramona out, and then put barriers in the doorway so the bat couldn’t escape.

I took up residence on the couch and nervously huddled there as the bat flapped against the barn doors, desperately trying to get out. I finally fell asleep a few hours later. At 7 am, I grabbed a phonebook and started calling exterminators. Turns out they charged several hundred dollars just to show up, and if they didn’t find anything, I still had to pay.

But there was no way I was going to go back into that room. I finally called my step-dad at work and made him come over and look for the bat. He never found it. No one ever found it. Which is all well and good, but at approximately 9:30 I was on the phone with another friend cajoling her into moving out of her parents’ house into a new apartment with me.

I don’t do apartments with bats.

In relating this story, I thought of another: So this apartment was in a strange area. It was mainly industrial, but there was this one block that had apartments. And I think there were only four apartments in my building. Old building, small building.

And there was a similar building next door. Two women lived there. Never met ’em, never wanted to. They seemed… interesting.

Anyway, one summer night, very late at night, I was awakened by voices coming from open windows next door. I listened in, and became disturbed by the conversation. I got up and came out into the living room. At the same time, my roommate came out of her room. We looked at each other, eyes wide, and went into her room, ducking down.

The neighbors were hanging out with two men between our buildings and discussing—in length and loudly—the three-way they had recently had. The intricacies, the logistics, the repercussions in terms of their relationships… it was a lot.

Anyone still with me? No? Okay.

So I have mentioned Death Cab for Claire. Repeatedly.

Because it’s menacing me.

If you are reading this and have not heard of Death Cab for Claire, it’s a truck cab sticker of this freaky, disembodied corpse.

You heard me right.

I got brave and took a picture. Death Cab for Claire is making its national debut. Tonight. 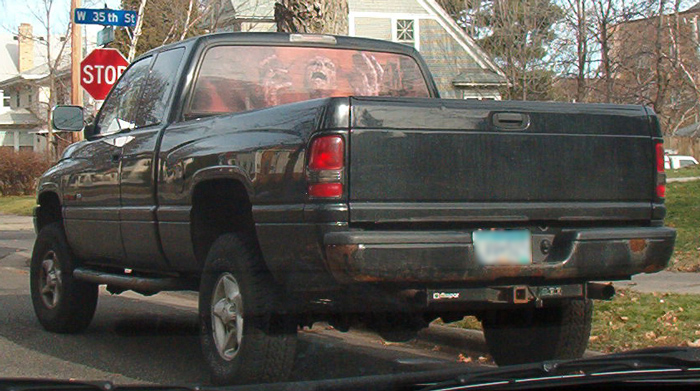 Alright, I’m just gonna give you a detail shot:

Look, who pays actual money for a creepy truck cab decal of a rotting corpse?

On a happier note, I would also like to introduce you to Norman: 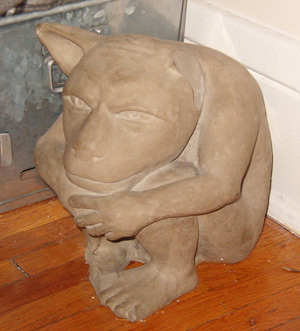 Norman is a concrete gargoyle and I was lucky enough to come into posession of because a boyfriend was moving to California. He had purchased Norman from some sort of discount sale at Dayton’s because Norman is damaged. But I like to think of him as unique.

His ear and his foot are (clearly) missing.

After we parted ways, my ex-boyfriend tried to reclaim him, along with the rest of the things he had given me. As gifts. I told him I would give every damn thing back if he paid me the $150 he owed me, but that he was getting Norman back over my cold, dead body.

As it stands, Norman is my protector. He’s the last thing I take out of apartments. I love Norman. His head is discolored from my petting him.